When One Group’s Desires Conflict with Another Groups Rights 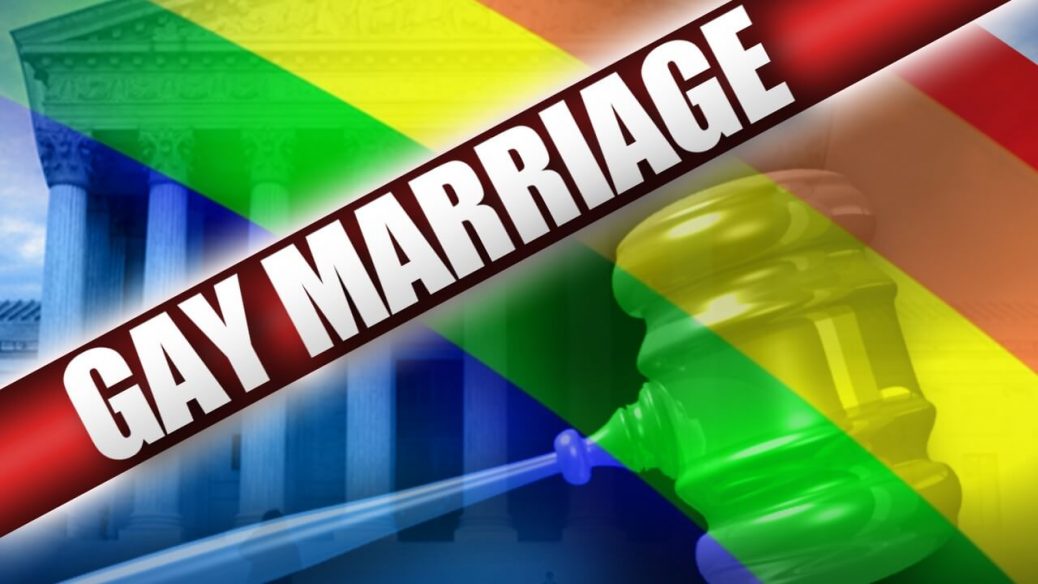 In case you were under a rock or hanging out in a cave, the U.S. Senate passed a bill named the Respect for Marriage Act on November 29th, 2022. This bill, which will most likely easily pass in the lame-duck House session and then make it to Joe Biden’s desk before December 9th, is said to provide federal protections for same-sex marriages as it repeals the Defense of Marriage Act. (The Clinton era law which legally defined marriage as between one man and one woman and permitted states not to recognize same-sex marriages from other states.) The bill, as currently written, would not force states to allow same-sex couples to marry under the Supreme Court’s 2015 Obergefell v. Hodges decision. It would, however, make it so that any “person acting under color of State law” must fully recognize marriage between two people in another state and that the federal government must recognize marriages if they were valid in the state where the marriage occurred. In simpler words, if Obergefell should someday be overturned and some states then decided to no longer recognize same-sex marriage, those states would still be required to recognize same-sex marriages from states that do recognize them. (The people of California get to decide for the people of Alabama.)

Democrats and activists have been saying the bill is necessary in an act of political theater as they were desperate to have any issue other than the economy going into the midterm elections. They jumped into full-blown fear-mongering that the Republicans are “coming for the gays” after the release of Supreme Court Justice Clarence Thomas’s concurring opinion in Dobbs v. Jackson Women’s Health Organization. In his concurrence, Thomas stated that the Court “should reconsider” its decisions in Griswold v. Connecticut, Lawrence v. Texas, and Obergefell v. Hodges (which established a “right” to contraception, privacy in the bedroom, and same-sex marriage, respectively) on the same grounds as the Dobbs decision. Plainly put, the Constitution does not give the federal government any power to regulate any of these issues, and it is clearly stated in the Tenth Amendment that any authority not delegated to the federal government falls to the States and the people.

Do LGBTQ activists have reason to worry about the fate of same-sex marriage? Well … sort of, but not really. Let me start by expressing my personal view on the issue, which many conservatives do not like, but it is my thoughts, so you are welcome to disagree. I am opposed to the Obergefell decision for the same reason Justice Thomas cites in his concurrence on the Dobbs case. It is a State’s rights issue. The federal government has no jurisdiction to interfere. I am, on the other hand, not opposed to same-sex marriage. My reasoning being that we are not actually discussing marriage. We are talking about government-recognized civil unions. Call that marriage if you wish, call it a civil union, or call it sunshine on a stick. It doesn’t matter what you call it; it remains government recognized civil union. (As such, states have every right to define what constitutes these unions.) True marriage is a spiritual bond that no government entity has authority over.

Back to the question of the fate of same-sex marriage, it is clear from the way the so-called Respect for Marriage Act is written that the bill’s authors did recognize the State’s rights issue to some extent. Remember, the bill does not force states to allow same-sex couples to marry. I would point out here that a SCOTUS that would overturn Obergefell would most likely overturn Respect for Marriage on the very same grounds; it is unconstitutional. (This is also true of the Defense of Marriage Act and for the same reasons.) However, the Democrat lawmakers know, that if made law, Respect for Marriage would add an extra-legal buffer between overturning Obergefell and returning the issue back to the states. (It is not likely that both would be overturned simultaneously.) Respect for Marriage buys the federal government time to cling to extra-constitutional power and allows the Democrats to claim that they were “fighting” for the LGBTQ community the whole time. (Time that they would hope would allow for a change in the make-up of the court back in favor of leftist activists.)

Political manipulation at its best. The Democrats know that it is unconstitutional to start. They get to play the hero for a constituent group. They get to cast their political adversaries as villains, and they know that most of those “elected” adversaries either lack the stones for the fight (because someone will call them names) or, like the continued assault on the constitutional limits that are meant to constrain the federal government. They also know that it would take years to mount a serious challenge to the law, and they use that time as part of the defense of the law. They will argue about who even has “standing” to challenge the law. But there is more going on with Respect for Marriage making it unconstitutional than just the State’s rights issue.

Religious liberty, a Constitutionally protected right as defined in the First Amendment, is stripped from individuals in this bill. The bill offers some low-level protection to you when you are at church, synagogue, or mosque but none to individuals, organizations, or other religious entities outside of church. You are no longer allowed to live your faith. (If you are a baker and do not wish to make a wedding cake for a same-sex wedding, too bad, do it or Colorado can fine you and take your business license. If you run a Christian adoption agency and believe you should only place children in homes where the parents are a married man and woman, well, you’re a bigot and New York should shut you down.) Senators Marco Rubio, James Langford, and Mike Lee all offered amendments to the bill that would have addressed the religious liberty concerns, but all were voted down. You wouldn’t be wrong to question why none of these amendments could be added to the bill if your true intent is to protect someone’s “rights” since congress can not (constitutionally) prioritize one person’s rights over another person’s rights.

So, what is the intent? I have already alluded to multiple reasons that the American political left would want to make the so-called Respect for Marriage Act law, but in the end, at least for a good number of the political players in this fiasco, it boils down to control. Our system was intentionally built to be adversarial and require debate, discussion, and agreement before advancing a bill to its next step of becoming law. This process is often criticized as being inefficient, but that too is part of the point. Without safeguards and stop gaps, it would be far too easy to use any “emergency” as an excuse to remove individual liberties from people. The elected could work their manipulatory magic on the populace to convince them to vote away their freedoms in the name of some sort of protection or safety.

Part of that manipulation requires the conditioning of the American people. Many Americans have already succumbed to conditioning. They have surrendered their freedom of expression to the woke mob to avoid being canceled. They have abandoned their bodily autonomy to travel freely or avoid losing their jobs. A once fiercely independent and liberty-loving people have, in large numbers, lost their value of faith and apparently their ability to think critically.

For the proponents of the Respect for Marriage Act, when this bill becomes law, it is another opportunity to convince Americans that Congress has no limits on what it can regulate, even in your personal life. It conditions less-than-well-educated Americans into thinking that passing a law can trump the Constitution. It is one more chance to make people believe that Congress can strip people of their rights in the name of “equity.” (Despite that word not meaning what they want it to mean.) Control through conditioning, manipulation, and no shortage of gaslighting.

Do LGBTQ activists have reason to worry about the fate of same-sex marriage? If the system worked as it should and the issue got in front of the SCOTUS, both Obergefell and Respect for Marriage would be struck down. You might be tempted to say that gives the activists good reason to worry, but that ignores a lot of facts on the ground. Let’s start with the fact that there are currently no court cases “in the pipeline” that would possibly bring Obergefell before the High Court. And while that could change, it is important to remember that even when the system is working as it should, there are many legitimate reasons that such a case may not get before the SCOTUS. Let’s continue with the fact that the current slate of justices are not likely to overturn Obergefell as they said precisely that in the Dobbs majority opinion, it was only Justice Thomas who said the court should revisit those other cases. And let’s follow that up with the fact that even if the SCOTUS did finally, at a point in the future, send the matter back to the states, there is minimal political will at the state level to undo the current status quo. Even the most Christian Conservative of states would have a difficult time changing the present policies. At best, some will want to change the terminology back to civil unions, but I have already explained why that is a distinction without a difference. So no, there is no reason for LGBTQ folks to be worried. I would remind them that being Pro-Constitution is not being anti-LGBTQ, being Pro-State’s Rights is not being anti-same sex marriage and believing Chuck Schumer when he tells them that they need him and the Democrats to protect them is unwise at best.

But there are groups of Americans who should be worried about the Respect for Marriage Act. Religious Americans who believe, as a matter of faith, that marriage is defined as being between a man and a woman. (This includes more than just the Christians likely to be the primary targets of punishment from this legislation.) People who believe that they should not be compelled by popular culture or government mandate to participate in activities that conflict with their deeply held personal beliefs should be outraged by the bill because their liberties are being infringed upon. In truth, all Americans should be enraged because no American should ever be told by our government to just sit down, shut up, and do what we tell you to do.

Tim Tapp is the host of the syndicated, conservative talk show “Tapp” into the Truth. He calls East Tennessee home, where he broadcasts and writes. He also still works in Quality Assurance for a food manufacturing company as he takes up the cause of defending our republic. Find out more at www.tappintothetruth.com