When “Hell” Freezes Over 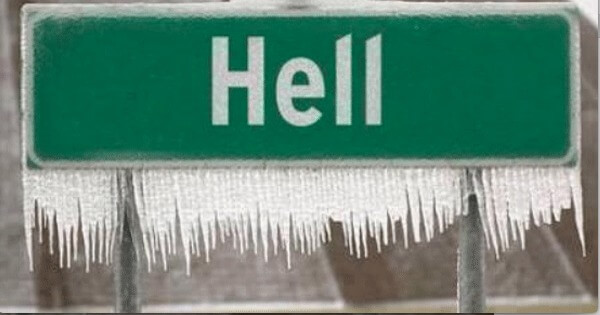 A few years ago a place called “hell” by many (Washington D.C.) froze over and Al Gore was unable to sprinkle Global Warming dust on the town and thaw it out, but look on the bright side – the country still went on with business. In fact, we as a country do better when the convicts in the Federal Government are out of business. So, I’ve come to a conclusion. The next time “hell” is frozen over, let’s propose a way to: “BALANCE THE BUDGET”.

I looked up two “very important” departments and in the essence of time will just assume the rest of the Government run agencies are about the same. Here’s the plan. When Hell freezes over and our Federal Government is off, and the country is still functioning, why do we need these departments to help the citizens?

· The department of Education was signed into law on October 17, 1979 by Jimmy Carter. In 2007 according to Wikipedia the budget was 972 billion. Is there any doubt which direction the test scores have gone since 1979?

· The Department of Transportation was signed into law on October 15, 1966 by Lyndon Johnson. The budget for 2008 was 670 billion according to the Office of Management and Budget.

Does anyone think we get our money’s worth? What do they do?

· The department of the Treasury

Do the math. If the Feds would shut-down all departments today, notify the employees to look for another job and auction off the buildings and equipment, how long would it take to balance the budget. I know things are not selling right now but, surely there is a sewer department somewhere in the world who could use the stuff.

But wait, what about the elected thugs? Let’s propose cutting their salary by two thirds and let them go on leave 300 days a year and vacation the rest. Transfer their retirement to Social Security and stop all perks. The quality of work would go up and the taxpayer would pay less. Just a thought y’all.