What’s Wrong With Being Transgender? 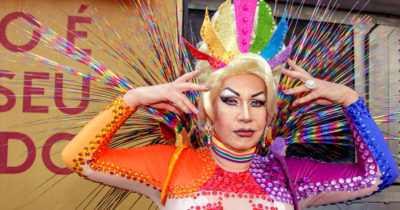 Believing oneself to be something other than what one’s own body clearly reveals him to be is indeed correctly diagnosed as a mental disorder. Whether it’s a matter of a male believing he is female, or a human believing they are a horse, it’s an equally psychotic break with physical reality.

While some mental disorders can be the result of damage to the brain, or a chemical imbalance in the body, the source of a person with an otherwise sound mind and body believing something that clearly defies reality is found outside of one’s self.

True, or full transgender identity – as opposed to a young child merely being sexually confused – is the product of demonic deception in which satanic spiritual agency administers unnatural and false, thoughts and impulses to a person’s psyche, then leads the victim to believe that the impulses are his own actual thoughts and feelings and that to be true to himself he must accept, or “take” the thought, thus making it his own and acting upon those feelings. In believing the lie and acting on the impulses in an endeavor to be true to one’s perceived real-self, the victim is deceived into attempting to be something that he is not, and which he can never become.

Believing we are something that we are not, separates us from the reality of who we actually are and what we were created to be. This separates us from the God-ordained purpose of our existence and thereby separates our existence from meaning. A person without a sense of purpose attempting to live a life without meaning will obviously be much more susceptible to confusion and depression.

In the case of the American youth who have been deceived into believing they are a gender that they are not, it has opened the door to such mental distress that five times more than the national average are attempting suicide in search of relief. Of course, this too is the work of a demonic agency that preys upon the now mentally distraught, selling them the lie that death is the only cure for the life they’ve been deceived into living.

The good news is that only 2 percent of America’s youth have succumbed to this lie and accepted a transgender identity. This is a reminder that Satan’s power is limited to the ability to deceive and that even his ability to deceive is quite limited. Deception of this sort generally requires catching the right person, at the right time, in the right circumstance, to be able to sell them on the right lie.

Things like a child being sexually molested, verbally abused, or subjected to the psychological trauma of divorce, to name just a few, can help create favorable conditions for such deception by placing the child into a circumstance that their psyche is not equipped to handle. It leaves a gap of understanding in the child’s mind that the devil will all too gladly help them fill with thoughts like “your father left because you’re unlovable,” or “that adult did sexual things to you because there’s something wrong with you,” and a thousand more.

No, Satan doesn’t play fair. His minions will prey upon the weak, the innocent, and the traumatized. He’s the original child abuser and will sow twisted thoughts and deceitful lies into the mind of a child whenever he gets the chance. Whether it be transgender thoughts or using grades in school to help convince a child they are inferior and setting them up for a life-long complex, the mind is indeed a battlefield. This is why children need to be protected spiritually, mentally, and emotionally even more than physically.

However, who I have considerably less tolerance for are the adults, some in the media, some in schools, and some even masquerading as clergy, who make themselves a mouthpiece for the devil, spreading the doctrine of demons by telling innocent children that they might not be what their Creator made them be, their body shows them to be, and their very genetic encoding proves them to be. (Gender is genetically encoded from birth and cannot be changed through medical treatment. Transgenderism is psychological only and has no physical basis. Listen to this interview with Dr. Michelle Cretella to learn more.)

While justly disapproving of those who assist in spreading the transgender lie, we need to remember that what we’re really wrestling with is not flesh and blood. It’s not as though the purveyors of transgenderism thought this up on their own and just woke up one morning saying “hey, I’ve got an idea, let’s go lie to some kids and see if we can really screw up their sexual psyche.”

Like the youth who have been taken in this trap, the proponents of transgenderism have also been deceived by lies administered to the inhabitants of this planet by satanic principalities, powers, rulers of the darkness of this age, and spiritual hosts of wickedness in the heavenly places (Ephesians 6:12). The degree to which each of us is susceptible to believing those lies, and falling prey to those powers, will be in proportion to our knowledge of, love for, and devotion to truth, remembering that God’s word is the truth (John 17:17). Rejection of truth will leave us doomed to delusion as there is nothing left to believe but a lie (2 Thessalonians 2:10-11).

While transgender propaganda alone does not force a child to believe they are of the opposite sex, it certainly opens the door to gender confusion which creates the atmosphere in which hard-core deception can prosper at convincing children to imitate the opposite sex; adolescents to take puberty-blocking drugs; adults to have their bodies surgically mutilated; and 35 percent of youth to attempt suicide. Those in our society who are telling children that transgenderism is normal are effectively acting as the accomplice to a molester, convincing unwary children that it’s safe to get into a car with a stranger who is going to use and abuse them until their minds become so twisted and tormented that many will wish they were dead.

Even on a purely natural level, not considering the spiritual nature of the matter, for adults to “support” children engaging in something known to make them far more likely to use drugs, and which puts them at five times greater risk of attempting suicide, is reckless child endangerment. Certainly, anyone who chose to “support” children who were intrigued with Russian roulette by assuring them “it’s okay,” and that “it’s a natural curiosity,” then buying them a box of live ammo to play with, would be prosecuted and imprisoned.