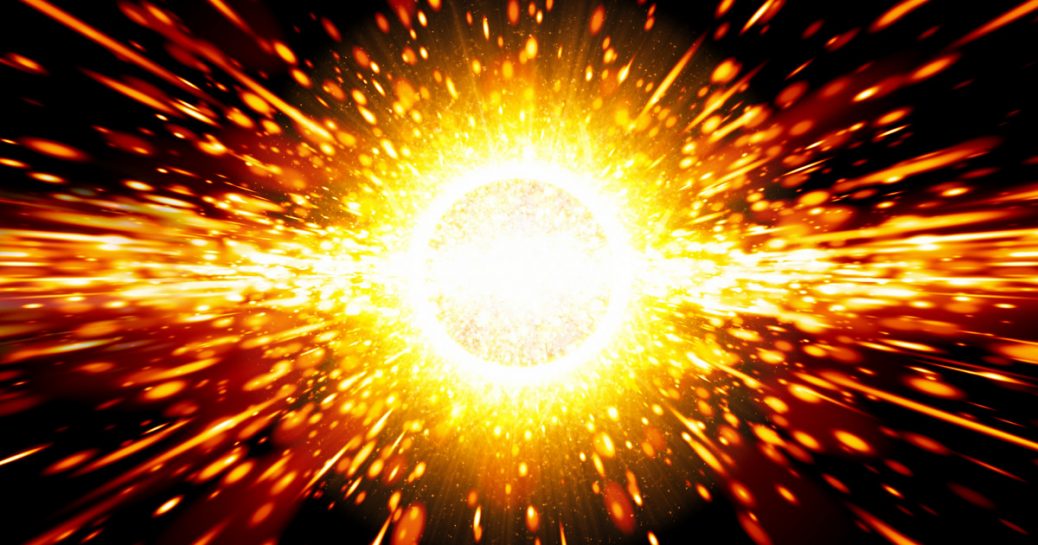 I watched a documentary on the history channel about the history of the earth in two hours.  It began with the Big Bang theory and I realized what a bogus theory that is.  If you look at the suppositions the big bang theory contains you wonder how in the world ( or even out of this world ) anyone could buy into such nonsense.

To begin with imagine a small ball of energy ( which is what is posited) isolated somewhere in the universe with nothing else.  That scene should give you pause but let’s grant them this beginning point.  It isn’t valid but for the sake of argument we’ll continue.  The next part of this theory points out the ball of energy explodes.  What causes it to explode is never mentioned.  It just explodes and sends matter throughout the universe.  This is where the theory really falls apart.  Think of the distance, the time and the velocity of matter that would be required to spread out to fill the universe.  The theory posits that it happened all at once but obviously this couldn’t be as it takes billions of light years for light to travel from star to star.  Matter doesn’t travel at the speed of light so that makes the length of the explosion much more than instantaneous.

Back to the theory that only a ball of energy exists in all of existence. That has to come from pure imagination as there is nothing to substantiate such an occurrence.  What would isolate a ball of energy in a specific location in a complete void of space?  If the answer is it was just there why not just posit that all of the universe was just there?  There is much more evidence for the later than the former.

The theory goes on that the burst of energy released gases that collided and mixed to make swirling masses that became stars and eventually planets.  Why would this be the process?  Don’t gases dissipate?  Why would the source of solid matter have to come from swirling combining gases?  If the gases had to come from a ball of energy why not matter without the transition from gases?

Perhaps the question “how did the universe begin?” is a question that doesn’t pertain to reality.  Why would the universe which contains all that there is need to have a starting point and from what?  Asking such a question opens up a lot of speculative answers but the question necessarily requires an imaginary beginning where a beginning really doesn’t make any sense.  We have no experience with something coming from nothing so why should we posit the universe with such supposition?  It certainly provides a mechanism for an explanation just as the soothsayers of old posited a God as the creator but such proclamations only beg the question of what then created God or in the case of the Big Bang theory what created the ball of energy. This unending regression of searching for an ultimate cause only invites the speculator who has no idea that could be substantiated and will not stand up to interrogation of its flaws.

The law of causality refers to entities and how they act based on their identities.  A “ball of energy” is a contradiction in terms.  When you observe energy or measure energy you observe what it is applied to.  You do not ascribe a shape to energy.  Electrical energy can be imagined as electrons flowing through wires or observed as a lightning bolt ,but the form of electricity observed is instantaneous and extremely varied. Since there are various forms of energy such as atomic, hydraulic and electrical to name a few what kind of energy is contained in that imagined ball that supposedly created the universe?  Presumably atomic energy would be the energy of choice but what would trigger such an explosion of such magnitude that it would reverberate throughout all that is?  Such an explosion is unimaginable and impossible.

Evidently the theory that the universe is expanding has triggered this Big Bang nonsense.  Expanding to where?  The universe must be redefined for such a theory to have any credence at all. But to redefine the universe to a limited container is to then ask the question what is outside of the universe?  Whatever that is determined to be called must then take on the same concept we are referring to when we now speak of the universe.  This attempt at limiting the universe is purposeless.

One does not have to spend a lifetime star gazing to examine the veracity of the Big Bang theory.  Many political and economic theories are propagated by so called experts that never work in reality.  Keynesian economics is simply false and doesn’t work yet many claim to be expert economists who side with its tenets.  Authoritarians continue to face rebellion and overthrows in spite of the evidence that restricting individual freedom is counter productive.  People who are in the field of astronomy and subscribe to the Big Bang theory do not have far off evidence to support their conjecture.  The answer to such a theory is right here on earth between their ears. Positing a theory that simply creates more questions than it answers is not an explanation of the question, “How did the universe begin?’.  The question that first must be asked , “ Is the Universe ( all that is and has been and will be ) such that it had a beginning?  If matter and energy are interchangeable why would they need to come into existence?  To posit they couldn’t just be there is to pass the same question on to the existence of a ball of energy.  Somewhere in the chain of reasoning the question of where did that come from becomes circular and irrelevant.  The old explanation the Hindu and the Elephant and the Turtle has been updated to be a ball of energy sitting in an unspecified spot in space .  The questions and the flaws are very similar in that they both explain nothing about what they are attempting to “explain”.

This brings up a flaw in the mentality of those who don’t question the “experts”.  Training and titles do not guarantee knowledge.  Many highly educated persons spout because of the credentials they have.  You see this most often in political leaders who ascribe to pet theories they’ve absorbed and never thought out.  If a big enough crowd applauds they think they must be right.  When the results of their folly are laid bare they finally must admit their errors.  Any despot that has tried to conquer the world has found the encouragement of the crowd was a false signal of his knowledge.