What would Mr. Rogers do? 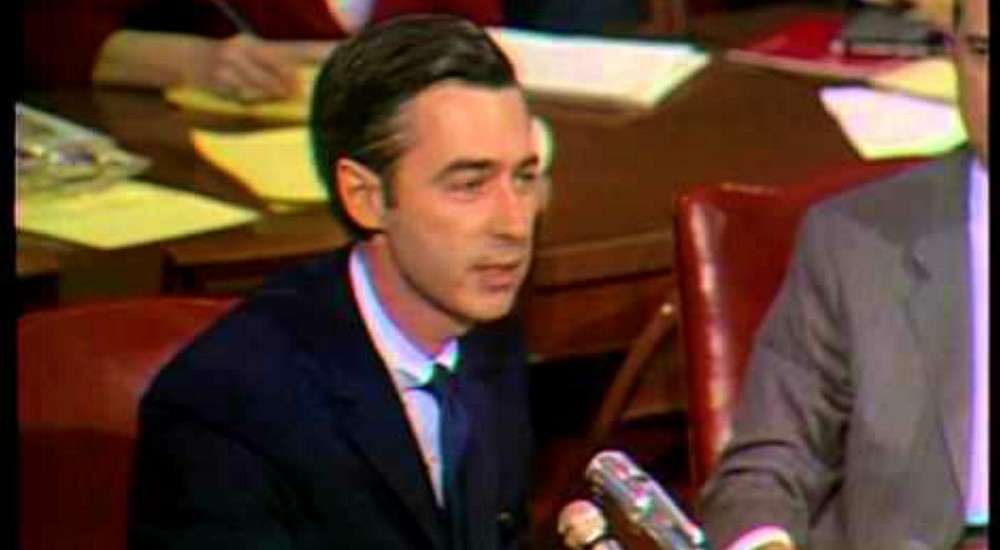 What has happened to our country? We have seen the PARTY OF HATE diligently working to destroy a man’s character, drag a confused woman in front of the public with no corroborating evidence, like she was some freak show in a circus, and accost our duly elected senators in elevators and airports because some fringe lunatics might not like their decisions.  We have seen the PARTY OF HATE question a man with a three-decade sterling reputation as a judge, not for his ability as a judge but for his daring to be a normal teenage boy.  The PARTY OF HATE is fearful that his distaste for killing babies might sway his decisions, knowing that if abortion were a constitutional right he would defend it, but also knowing that they could not make that claim.

The PARTY OF HATE now espouses kicking out women (Republicans) in power (Eric Holder) and get tuff (in their face – i.e. Maxine Watters) and feel you cannot be civil with women (Republicans) who disagree with them (i.e., want to destroy what you stand for, what you care about – Hillary Clinton)  The PARTY OF HATE wants to continue to slander (impeach – i.e. Cory Booker) Justice Kavanaugh for what purpose? – to continue to divide and disrupt. And the PARTY OF HATE smugly stands by while Antifa (Anti = Against democracy, Fa = Fascist) perpetrates anarchy in the streets, on college campuses, and on the steps of the Supreme Court.

Who is the PARTY OF HATE?  It is not the majority of the Democrats.  They are as repulsed by all this ugliness as are most of the Republicans.  It is the leftist radicals, the professional politicians, the power brokers, and the media that have wrestled control out of the normal, sane, and concerned majority and hijacked the Democrat Party and now dictate what that majority must think.  The ideas you hear are not from the majority but are the fringe that killed Kennedy for being too moderate.  Martin Luthor King would roll over in his grave. These Leftists not only know they are right but believe they are morally superior to all others, including most of the Democrats.  They do not consider themselves bound by the normal conventions of civility and decency and they tell you this in your face.

What can the majority do?  Vote the PARTY OF HATE out of control.  The #WalkAway movement is a grassroots organization of former Democrats who have been turned off by the violent and dishonest practices of the Democrat Party. “It really opened my eyes to how they are manipulating minority groups, manipulating African-Americans, gay people and I wanted to do something about it so I started something called the Walkaway Campaign”, said Brandon Straka, the founder of the Walkaway Campaign. Most of both Democrats and Republicans want the same thing, they just disagree with how to get there.  So, there isn’t a great divide, and we are united in rejecting all this hate and corruption.  America is not fundamentally racist and sexist. We all want to get rid of the swamp.

So, this brings me back to my original question.  What would Fred Rogers do? “Won’t you be my neighbor?  It’s an invitation to help somebody know that they’re loved and capable of loving.”  I have seen him talk to children about their fears and concerns, and really listen.  We, the people are neighbors.  Let’s get together and work out a way that we all can get what we all want.  Let’s make America neighbors again.