What Justice Really Is 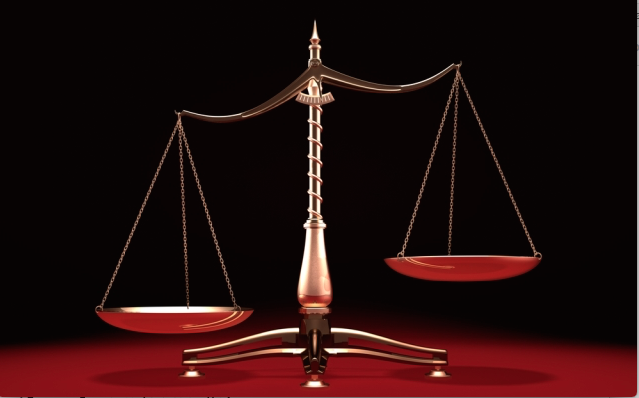 Just what is justice? Most people never know, nor ever have any. In today’s complex societies, justice is never fully explained to people in general.

For a clue, we need to turn back to early man for the very beginnings. Fist, those who were not physically fit or fairly strong could not survive. When two people met, any conflicts were solved immediately by personal physical force, the stronger, faster or more clever usually winning. Trial by strength, immediately, was justice. That’s how it all started. This is where the “adversarial” portion of what we call justice today came from. Very simply, it was trial by combat.

The traditional symbol for justice is the blindfolded woman holding a scale. Almost no one knows what this means. Essentially, in our vast cosmos, a certain human assumption has been made, otherwise “life” has no purpose. And that great assumption is that in this great, imponderable universe, whether divinely or naturally inspired, that all things being equal, Good will triumph over Evil. Another way of saying this is human survival positive actions will succeed, and human survival negative actions will fail, if a balance is kept.

As humans societies evolved, judges were created to hold an “arena” perfectly balanced, no particular advantage to either side in a confrontation. THAT was the judges sole purpose, to keep the adversaries in combat “even”, like the balance scales of the statue. Good was presumed to be the winner “if” the judge maintained balance and truly kept things even. The aggrieved party’s “justice” was the satisfaction of “defeating” and possibly destroying his opponent in the arena.

A time came when weaker humans were needed (accountants, shopkeepers etc.) and these less physically strong people were unable to win in these physical contests, but did have grievances and needed justice. Thus a concept of “champions” evolved, physical people who would step into the arena “for” an aggrieved party, allowing this “equality” of strength of arms to come into play.

As human societies evolved, the champions became “solicitors” or “lawyers”; the weapons became the “words of due process, or law”; and the judges have all forgotten their original purpose.

As for justice, or personal individual satisfaction for a grievance, this no longer exists. The “State” has substituted itself as the “victim” of the violation of any of it’s laws. The satisfaction of the “State” has become the new definition of Justice. The individual victim is now ignored, except as a tool to allow the “State” it’s day in court, and sometimes as a witness. New “victims rights” groups in recent years are now trying to get some satisfaction for victims of crimes, a right they never should have lost in the first place.

There is another misconception that the “truth” somehow has a place in a court of law. The truth may be used as a weapon in a court of law, but it is totally unnecessary. This is all really an adversarial trial of combat, kept on an even balance by the judge, and liars or truth sayers are allowed equally. The truth has no required place in a court arena. That the truth will win is not necessarily so. The winner, who may or may not be good, will win, that is all.

Most citizens in America do not know that there are two kinds of courts, Criminal and Civil. Criminal courts are where societies’ criminal laws are usually decided, and the “State” with it’s police and prosecution powers functions. Civil courts are for personal grievances by individuals against other individuals in non-criminal actions. However, as humans have evolved societies, they have also created fictitious “humans” called “corporations”. Some of these “corporations” have become larger than some governments. Thus the ability to keep “equality” in a court arena between an individual and a “corporation” becomes ludicrous. The latest destruction of the “equality” of the arena has come from “tax collectors” in various societies. Sometimes an individual now finds him or her self in the “civil” arena (individual vs individual) with his opponent being the massive arsenal of an entire government against him in the form of tax collectors. Combine this with judges who have no idea that they are supposed to be keeping the “combat” equal, and one can see why personal satisfaction, or justice for grievances has become systematically close to non-existent.

As anyone can see, equal balance is critical for “justice” to be able to exist at all. Thus, “justice” is “justice”. There is no such thing as “social-justice”, or “racial-justice”, or “gender-justice”. Once you add the “modifier” to the word “justice” you have no equality in the “arena” where justice is to be decided. Any modifier to “justice” means there is NO JUSTICE AT ALL. It means that a finger is pushing the scale of justice eliminating equality.

As to this “hyphenated” thing, it was Theodore Roosevelt at the turn of the century that gave a speech where he said that “there is no such thing as a hyphenated American.” If you are a “German-American” or “Irish-American” or “Italian American” then you are not an “American” at all. Being or becoming an American is an Idea, or a state of mind. American is American. Anyone can become one. They must accept our laws, morals and culture and believe that individualism is king. If you attempt to add a modifier to “American you may be a citizen, but YOU ARE NOT AN AMERICAN, PERIOD!

And similarly, hyphenated justice is no justice at all. The idea of being there being such a thing as hyphenated justice is a fools’ errand. And this is the state of American justice today. ALL of the judges in America, except for maybe Just ice Thomas have forgotten their reason for being a judge.

Good luck! May you choose wisely in this next election.