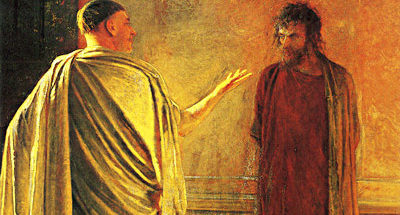 Pilate therefore said to Him, “Are You a king then?”

Jesus answered, “You say rightly that I am a king. For this cause I was born, and for this cause I have come into the world, that I should bear witness to the truth. Everyone who is of the truth hears My voice.”

Pilate said to Him, “What is truth?”

Pilate did not know or understand the truth, even though the “Truth” was standing right in front of him.

Four chapters earlier in the book of John, Jesus tells us, “I am the way, the truth, and the life. No one comes to the Father except through Me.”

Sadly we seem to be living in a world where the truth is either not in us or relative. We are just like Pilate; we don’t understand the truth when it’s standing right in front of us. We don’t see the truth because the truth is not what we expected and so we reject it.

We think the truth of a matter depends on the perspective of who is telling it.

If a couple that we know is breaking up, we will believe the person to whom we are most connected. But when a marriage or a relationship ends, there are always two sides to the story. The old saying is true, “It take two to tango.”

In a case like that the only way to determine the truth is to hear both sides of the story. Even then we will have to really work at being objective. The truth of a break up is most often that both sides need to accept some of the blame.

It’s the same in politics.

One side is always claiming the other side is lying to everyone. Sometimes it’s all so confusing we want to throw our hands up and run screaming from the room.

But there is a truth out there if we just listen to both sides with an open mind. Often the truth lies somewhere in the middle, between the left and the right. One side is not all bad and neither is the other side. The crazy thing is, at least here in America, both sides want the country to do well; they just each have a different way of going about it. No one side is as evil as the other side portrays it.

It’s the same in religion.

Even within the Christian church there are so many different denominations that claim to be teaching the right doctrine, that it’s just as confusing as the arguments between the political left and right. Many times over its history the Christian Church has been divided.

But even with all its divisions the Christian Church has at its heart some basic truths.

These are the fundamental truths of the Christian Church all who name the name of Christ should be able to accept. Sadly we keep arguing back and forth about the little things of the church and forget the basic beliefs that bind us as Christians together.

Then there are all the other religions of the world, each with their own truths.

Here is a truth for you; they cannot all be true, though there is some truth in most of them.

I don’t have the time or the space to argue for Christianity or even argue with the atheists who don’t believe in any god or religion. But I will state some truths that I see.

There is good and bad, black and white, though some still see shades of gray. But I think if you dig into those shades of gray, you will find a truth in there somewhere.

I will say one other thing about Christianity, when we get to heaven we are all going to be surprised by what we were wrong about here on earth. Even the greatest Bible teacher is going to find him or herself surprised by all the things they got wrong about God and His word.

We are not perfect, we all mess up. We all have lied, cheated or stolen at some point in our lives.  And we all have our own opinions about things.  We all must accept the truth that most of those opinions we hold on to are wrong, at least partly.

Even if we are so sure that we are right and everyone else is wrong, we should be open to the possibility that we might be wrong.

So many times when I listen to interviews between two competing spokespersons, I find that no one is listening. They are both talking over each other. That is NO WAY to get to the truth. Just because someone is louder, does not make them right.

If you want to understand the truth of a matter, you need to sit down quietly and listen to both sides.

When you find the truth of an argument you then have to be willing to accept that truth even if it goes against what you first thought was the truth.

Sometimes it seems impossible to get to the truth; facts contradict each other or are hard to come by. Other facts are held in secret and we just can’t know them. In a case like that we must go with our best judgment, knowing that there is a possibility we may be wrong.

And that’s the truth.