What If the Constitution Is Right? 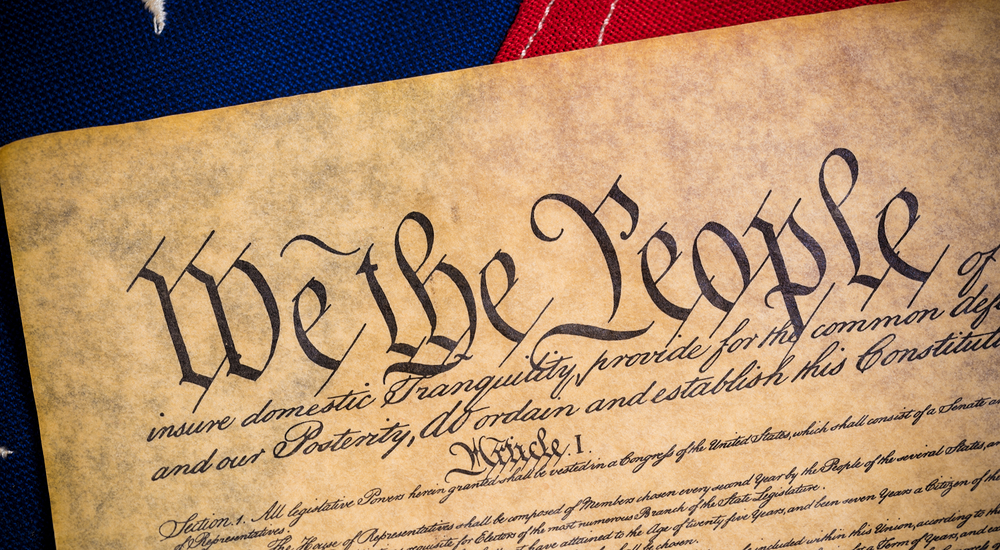 A crescendo of conflicting world views has left me pondering which, if any, lead to positive outcomes for the human race. That being said, from my armchair observations of current events, I also ask that you take time to ponder, wonder, conclude and comment.

There are two underlying world possibilities, that of predestination and that of free choice. If ancient prophecies are credible, outcomes were predetermined from the beginning and men are mere pawns on a giant chessboard. So it is written, so shall it be. With the other option, man is free, free to make choices and thus possesses ability to choose his own fate. I would like to believe that having been granted intelligence, that second option is the reality. I do not want to just sit and watch horrific events unfold, believing there is nothing I can do to effect the outcome.

A first step would be to define “positive outcome.” For me, at least, positive outcome might be achieving the top rung on Maslow’s “Hierarchy of Needs.” I leave it to you to determine your own personal definition.

What if the way to positive outcome results from central control?
There are several versions of centralism observable today:

The Hermit Kingdom of North Korea in which propaganda and punishment in equal measure have corralled an entire population into accepting poor food, crowded housing, few modern conveniences and little personal liberty. Here, equality for a great majority has been hugely achieved, but from my point of view, it is an equality of mass deprivation.

The dream of restoring the Caliphate, but expanded to include all of mankind is the announced goal from leaders of Islam. This necessitates returning to rules, mores and practices of the seventh century AD. With talk of the American Constitution being outdated and changed to keep up with the times, this same argument seems inapplicable to those who practice true Islam, as defined in the Koran. An Islamic state may be utopia if you are male, but half the planet is female and so for de facto female slaves and real life captured male slaves, living by the Koran seemingly is not desirable for all. I may be wrong and misguided, but still do not want to live in a Caliphate.

The dream of one world government has several different possibilities for attainment. There is the European Union’s version, including NATO and the UN. Then there are Marxists, currently split between the old Soviet Union and many in Europe and North and South America.

Marxists in America seem to have usurped the former Democrat Party, whose recently stated goals include redistribution of income, open borders, two categories of citizens: elitist rulers and everyone else, collapse of former sexual definitions and general rejection of a formal God, (Christian in particular) and former morality.

Then there are outright dictators as seen in much of Africa and parts of South America, but dictators seem restricted to relatively small swatches of the planet, with little desire to conquer the entire world.

Application of Marxist principles has been tested in a few countries with little lasting success, e.g. The former USSR, Cuba and Venezuela. I ask, if central planning and big government do not work on a small scale, why should they be expected to work on a world-wide scale? You tell me!

What if the way to positive outcome results from freedom: free markets and personal freedom?
What if capitalism as opposed to centralized planning and control is not the boogeyman some purport it to be? Basic economic theory initially published by Adam Smith in “The Wealth of Nations” and as practiced during the robust part of the Twentieth Century, shows that when the economic pie grows, everyone benefits from a larger slice of that pie. Rather than shared misery, we have shared prosperity. Unfettered capitalism is to a certain extent self-regulated, no one buys shoddy products and death from tainted food seems to reduce sale of that particular food, without regulation. Yes, certain rules are needed just as in traffic control, e.g. driving on the same side of the street, obeying traffic signals etc. to ensure orderly progress. Too many traffic rules actually slow traffic just as too many regulations slow prosperity achieved through capitalism. There are many examples of prosperity under freedom versus stagnation and general misery under over-regulation and taxation. Dallas versus Detroit, red states versus blue states, state economies under Democrat versus Republican governors, and outward versus inward population migration patterns.

Political correctness versus free speech is another example of division rather than unity…..control versus freedom. Before Obama, racial tensions were on the wane. Now blacks are demanding segregation and abolishing police. Racism has become a common part of the modern vocabulary. Before universities and college banned conservative speakers, discussion and a free exchange of thought took place. Before students demanded “safe spaces” from perceived micro- aggressions and conflicting viewpoints, an institution of higher learning was just that….a place to learn. Before a culture that promoted divisiveness versus friendship, I never thought about my friends’ and neighbors’ political affiliation or viewpoints. Now my window washer asks if I am a Republican or Democrat before he accepts me as a customer. Now my neighborhood blog spot separates political posts so as not to offend. Now my daughter was thrown out of a party by long time friends when she merely expressed a benign opinion that was misheard or mis-perceived. This same daughter gets a lecture from her boss when she was overheard using the word “Hispanic” in a personal telephone conversation during her lunch hour.

Victim-hood versus personal responsibility defines control versus freedom in a personal and tangible way. Even as a female, I was brought up to believe I could be anything or anyone I chose and then worked hard to be. I chose education, dedication and some sacrifice to attain my goal. Today as an elder, I have the freedom and financial independence to sit in my armchair, read, observe and pontificate. Along the way, I encountered obstacles but NEVER ONCE did I ever consider using government handouts, excuses or a sense of entitlement to get in my way of being a capable and determined person who could and would survive using my own wits, skills and sheer stubbornness to succeed. I will never forget the story told when I was in fifth grade about Plymouth Colony and The Mayflower Compact. Trying to build a new colony under perceived equality, almost everyone perished and only when the governor had the sense to learn from failure and grant private ownership of land and choice of work, did things begin to flourish. “A hand up, not a hand out,” “give a man a fish and he will eat for a day, teach a man to fish and he will eat for a lifetime,” and “where there is a will, there is a way,” are not just empty words to me, they are my way of life. Roosevelt’s “New Deal,” Johnson’s “War on Poverty,” and Clinton’s “Midnight Basketball” hurt rather than helped minority populations who are worse off now; children living in fatherless ghettos, prey to gangs and indoctrinated rather than educated. Excuses and a sense of victim-hood prevail today under the banner of “social justice.”

As we move into another election season, I regret America has made past choices that made the entire world a more dangerous place. “Peace through strength” has been replaced by “Smart Diplomacy.” “Peace through strength” brought about the fall of the Soviet Empire and the destruction of the Berlin Wall. “Smart diplomacy” has seen the Arab Spring fanned into a regional conflagration throughout Africa and the Mideast, with no happy end in sight. Western culture is being overrun by Islamic immigrants. Was this by intelligent design or was it because of our own feckless choices? All I know as I review my current election options, they seem diminished and I resent being forced to merely pick what I perceive to be the lesser of two evils. Evil is still evil and I want no part of it.

What if the founding fathers had it right?

What if the founding fathers ideas are outmoded and new ideas as postulated by Progressives moving toward Big Government and the all encompassing STATE are better?

What if Hillary Clinton is a smart, honest, experienced leader who has no self interests who will lead America into prosperity?

What if the US economy remains vibrant, strong, healthy and growing rapidly?

What if Donald Trump is an even-tempered, serious, successful businessman with no ego who will translate business acumen into statesmanship and still the troubled world waters?

What if the economy is at death’s door and all the growth/decline charts and indicators are correct?

What if Hillary Clinton is crooked to the core, dishonest, power mad and physically ill from some brain injury?

What if Donald Trump is a showman who simply wants a larger stage and has no idea of the implications of his muddled presidential campaign?

What if both candidates are so flawed they are removed from the ballot for one reason or another before the election?

What if I don’t need to worry because Planet X strikes, the hollow moon spaceship inhabitants invade, the sun goes supernova or we are struck by a passing asteroid before the November election? And then there is “Climate Change” aka Fukushima, polar shift or a geologic transformation.

I actually would prefer the last option! It removes my choice. What if?