What About Climate Change? 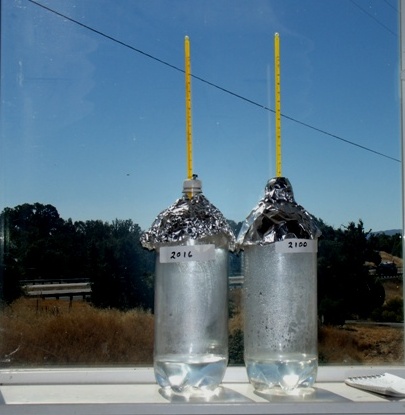 Dr. Frank Newport, Editor-in-Chief, Gallup Polling reports only 24% of the general public believe “climate change” is a serious problem, but physicist Dr. Joe Romm says it really is in his Climate Progress website which was “…one of the “Top 15 Green Websites” according to TIME Magazine in 2008. Thomas Friedman in a 2009 New York Times column noted “Climate Progress” is “…the indispensable blog.” In 2010 Time included Climate Progress in their list of the “25 Best Blogs of 2010” while Great Britain’s Guardian newspaper ranked Climate Progress at the top of the blogs in their “Top 50 Twitter climate accounts to follow.”

Dr. Joe Romm declares our rate of adding CO2 to the atmosphere means we will have 910 parts per million, ppm, and turn America into a desert by the year 2100 AD!

Lab thermometers are $2.39 on Ebay, two for less than $10 with postage. Baking soda and White Distilled Vinegar are home pantry items. Medicine droppers are found in most homes or $1.00 each in a drug store. Medicine droppers produce 20 drops per milliliter, ml, per industry standards for use by pharmacists, physicians and patients to accurately dispense medicine.

Plastic bottle caps are drilled by a Phillips screwdriver with a 1/4 inch shaft. Heat the tip an inch over a candle flame for 30 seconds. The handle will insulate it so you can hold it. Push the hot tip through the plastic cap in the center to leave a hole just large enough for a thermometer. Thermometers are pushed into caps three inches while the plastic is soft. On cooling they freeze into place, but can be removed by careful twisting, with a thumb and forefinger very near the cap applying gentle twisting force with patience.

The volume of “2.5 liter” soda bottles is actually 2,725 ml. Use bottled or well water to avoid municipal water chlorine and fluorine. Put 325 ml, into each for a net air volume of 2400 ml over water. This simulates Earth’s air very well as 71% of the planet is covered by water, 14% is green plants that put almost as much water vapor into air as do the seas. Only 15% is desert.

2,400 ml is 1/10th “molar volume” of air at 20° Celsius, a common room temperature in the United States. “Molar” is from “mole,” a contraction of “molecular” meaning the volume of a gas with a mass of one molecular weight in grams. 28 grams of nitrogen, N2, for example, as each nitrogen is 14 atomic weight units and there are two of them in “N2.”

To determine how much baking soda and vinegar to use for creating a test atmosphere we use chemical relationships based on sums of relative weights of the elements in the compounds in a reaction to produce CO2.

Hydrogen, the lightest element, is defined as one atomic weight unit that has two atoms in each molecule so it has a “mole” weight of two grams and gas volume of 24,000 ml at 20 Celsius degrees. Gas volume is the same for 32 grams of oxygen, O2. 28 grams of nitrogen, N2, or 44 grams of CO2, carbon dioxide. Every gas has a “mole” volume of 24,000 ml at 20°C and each has the same number of molecules.

Air is a mixture of three principle gases and eight “trace” gases, meaning we know they are present, but they are of no consequence. CO2 is in that class having only 0.04% and to be of consequence in the atmosphere it must have more than one percent according to the American Meteorological Society, the association of actual climate scientists.

The only gas changing quantity in air is water vapor as it can exist as a solid, liquid or gas in the range of temperatures on Earth. When it condenses the volume shrinks by a factor of 1200. No other atmospheric gas does that. It absorbs energy from sunlight far better than any gas in air, seven times more than CO2 per molecule. Nitrogen and oxygen capture little infrared energy.

In our atmospheric simulator we add known quantities of CO2 to the present day 400 ppm with baking soda, NaHCO3, and White Distilled Vinegar, that is five percent acetic acid, CH3COOH, using the reaction:

Sodium bicarbonate, NaHCO3, plus acetic acid, CH3COOH, combine to make sodium acetate, water and carbon dioxide gas, 44 g of CO2 is 24,000 ml, at 20°C, but we want a tiny amount. The task is getting it precisely.

Baking soda, sodium bicarbonate weighs nine grams per teaspoon. Adding half a quarter teaspoon measure will be about one gram in solution which is 32 times more than we need, but we can control the amount of CO2 it makes by limiting the acetic acid in the White Distilled Vinegar.

In the morning our 2016 air bottle has 400 ppm of CO2 and the 2100 AD has 959 ppm CO2. The test can be done outside, but we favor a south facing window sill as these bottles are easily tipped by an errant breeze and window glass passes infrared, IR, energy very well. When the sun is low very little IR comes through all the air with a low sun angle and little heating happens.

After 10 AM the sun angle is above 45 degrees and IR passes easily through less damp air which absorbs it. Be sure the thermometers are shaded from direct sun with paper or aluminum foil “hats” so you are reading temperature of air in the flasks and not that of direct sunlight on the thermometer.

The best days for these experiments are those with clear air and no clouds as moist air and clouds absorb lots of IR. Avoid overcast or rainy days.

Make a chart to track temperatures hourly. You will see they rise through the noon hour, peak at 1:00 PM, flatten and decline as sunlight is passing through increasing quantities of air as it approaches the horizon.

Dr. Romm predicts air in the “2100 AD” bottle will heat very dramatically between 9:00 AM and noon and will be at, or over 39º C, but it does not! What does this mean? Are the deniers right?

Experiments like this do not lie, but let’s go one step further and take a cue from the real atmospheric scientists, meteorologists. They say “trace gases,” those with less than 1%,have no significance in the physics of air. What if we bring CO2 up to their level of significance, over 1%?

This should turn our cola bottle atmospheric simulator into an oven capable of baking a pizza, but the temperature goes down then the sun hits it! How can this be?

CO2 forces water vapor out of air changing it to water, per the Le Chatelier Principle which says: “When a system at equilibrium incurs a change of pressure, volume, concentration or temperature it counteracts that change to establish a new equilibrium.”

Only two molecules in air capture IR to heat it. No other gases capture infrared, heat energy thus our Le Chatelier expression is:

The “[” brackets mean “moles/liter,” “g” is for gas or vapor, “l” is for liquid, “K” means “Constant” and “t” is temperature in degrees Kelvin which are degrees Celsius + 273. Water is the only participant that can change from gas to liquid; CO2 cannot and we can solve for water vapor to determine why the system behaves as it does. Revising the equation to solve for water vapor yields: