Weep for the Children: The Democrat War on American’s Self-Defense 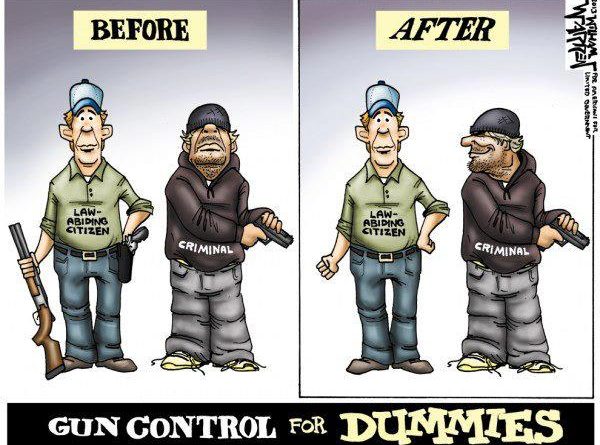 All the laws that America has in place for gun control, just like those for immigration, WORK!  What doesn’t work are laws that Democrats have put in place.  How those laws got there tells the whole story of what kind of people are Democrats.

The entire leftist argument against gun ownership is all founded on ignorance and lies and appeals to the gullibility of children.  Tucker Carlson had a New York City councilman, Jumaane Williams, on his show to talk about the gun control for which he is advocating.  Mr. Williams, like so many Democrats in Congress, is a clear example of why stupid people shouldn’t be allowed to vote because they elect stupid people who make stupid arguments.  His premise for gun control laws he is proposing is based on everyone having “unfettered access” to guns as if America is Nigeria and anyone can get any gun they want any time.  American gun laws all work until Democrats gets their hands on them and turn them inside out through their duplicity.  Schools didn’t used to be “gun free zones.”  My school had lots of guns.  We brought them to school!  We students didn’t go around shooting anyone, even accidentally, and the schools were perfectly safe because we were raised with very different values than kids are raised today.  We were taught morality and that we had divine rights and a responsibility to live a moral life.  Kids today are taught that they are descended from apes and have the right to make up their own morality, and then liberal atheists wonder why their children behave like animals.  Guns didn’t become a problem in school until black gangs in Democrat city schools began bringing guns and knives with which to kill their classmates and teachers.  That is when Democrats advocated for making schools “gun free zones.”  The result of this is what we see today – criminals, terrorists, and psychotics all know they can go into a school with a gun and rampage on killing sprees with impunity.  As they have always done throughout the history of this country Democrats create the problem and then fight against all solutions so they can blame Republicans.  The only solution they will accept is one in which the people lose and they gain power.

This is just like the manner in which Democrats have successfully duped Republicans into passing other laws that gave the Left power they should never have been allowed to have.  Laws, such as the 15th Amendment, that was supposed to affirm that blacks in the South had the right to vote, but instead converted America’s republic to more of a democracy.  What’s wrong with a democracy, you ask?  Wasn’t America founded as a democracy?  No, it was founded as a republic which is completely different.  In a democracy everyone gets to vote.  In a republic only the taxpaying citizens are allowed to vote.  In a republic the people who work and are productive citizens, and who are responsible with their money enough to make a business or buy, own, and operate property paid taxes, and it was they who were the ones that decided how that tax money would be spent.  In a democracy everybody and his brother votes and gets to decide how tax money is spent even if they don’t contribute to tax revenue.  The result is that deadbeats vote for benefits for themselves paid for by those others who pay taxes.

Democrats rely on having a permanent underclass to support them.  That’s why they want younger, more ignorant youths to have the vote.  They pander and flatter ignorant youths as having “instinctive wisdom” and being able to “see through Republicans B.S.”  This is the exact opposite of the truth.  They are not able to use the logic and intelligence derived from experience to see through lies, so they are incapable of seeing through Democrat B.S.  If what Democrats said was true then children would make the best voters.  But anyone with a brain knows that children believe whatever their parents tell them.  Teenagers are in the development stage between childhood and adulthood and are still easily swayed and duped by more guileful and duplicitous adults.  Democrats would give children the power to take guns away from adults under the phony premise that they’re the ones being shot because of guns.  The lying liberals tell the ignorant youths that it is the guns that put them in danger, not the lack of them or the prevalence of violent criminals Democrats have empowered to proliferate.  Our children are the ones suffering the most because Democrats made laws to make them defenseless!  When conservatives say, let teachers carry guns that want to, the Left says, they are not qualified and that Republicans just want there to be more guns in schools to kill children.  As if teachers are not adult enough to be trained to handle guns properly as police are, or that putting guns in their hands puts students in danger?  How f***ed up in the head is that?

Liberals create these problems with their ideology and then have their radical activists say, “That guy shouldn’t have been able to get a gun.”  Their solution is not to keep mentally unstable or criminals from getting guns, but to take them away from law-abiding citizens so they can’t defend themselves.  Do you think a new law will disarm criminals?  They will be as effective in getting guns off the streets as outlawing drugs has been.  They want to ban “weapons of war” from the hands of civilians, but don’t have the first clue what constitutes a weapon of war.  They think AR-15s are the same as M16s because they look alike.  They are as alike as a Mustang 6-cyclinder and a Mustang Cobra.  Schools keep being attacked and they keep wanting to disarm the people and make more laws saying no one can bring guns into schools.  How well has their “gun free zone” law kept out guns?  As effective as keeping them out of the hands of criminals.  I had to say this twice because this is their insanity defense of doing the same thing over and over and expecting a different result.  This is liberal’s backwards think at its finest.  Let the teachers who want to be armed.  The result will surprise foolish liberals, but not Democrat elites who have been advocating for the abolition of the 2nd Amendment for the same reason Hitler, Stalin, Mao, Castro, and every socialist dictator has that disarmed their people.  Leftist pretenders have been all over YouTube and the Democrat’s media as activist actors pretending to be students conducting anti-gun, anti-America campaigns to slander Republicans, Christians, conservatives, the NRA, and President Trump.  The gun debate hasn’t been a debate in decades.  It is only Democrats trying to manipulate Americans by creating the conditions for tragedies to dupe them into giving up their rights to self-defense.  They do so by shutting down debate pretending to be altruistic and above morality claiming they are “not political” when they are nothing but!  It is their immorality and duplicity that has brought about this tragedy.  Who would help them profit from it?

The lies perpetrated by leftist liberals are a river that runs wide and deep.  They slander Republicans for shootings Democrats enabled, illegal immigrants the Democrats invited, and a poor economy the Democrats engineered.  One of their primary leaders, Nancy Pelosi, has been slandering Trump’s tax reform as “Armageddon,” “Stealing from the poor,” “Peddling bread crumbs,” and “unpatriotic” because she says they are not “investing in the future.”  It is Democrats who have been taking away our children’s future by bringing foreigners into America to replace them, running up a colossal national debt to subjugate them, empowering criminals and terrorists to terrorize them, and advocate for taking guns away to enslave them.  Democrats began America as the party of slavery and they would end it the same way.  Government taking the people’s money does not “invest in the future.”  Businesses do that when they use their profits to grow.  When government takes those profits all they can do is redistribute it to their cronies and toadies who donate to their campaigns and vote for them.  Democrat minions vote for slavery in the hopes of being rewarded by their masters.  It is the foolish mentality of victimhood and it gets them nothing but the misery in which they wallow.

NPR Misrepresents Rush and the Right

Democrat Agenda is a Disarmed Populace