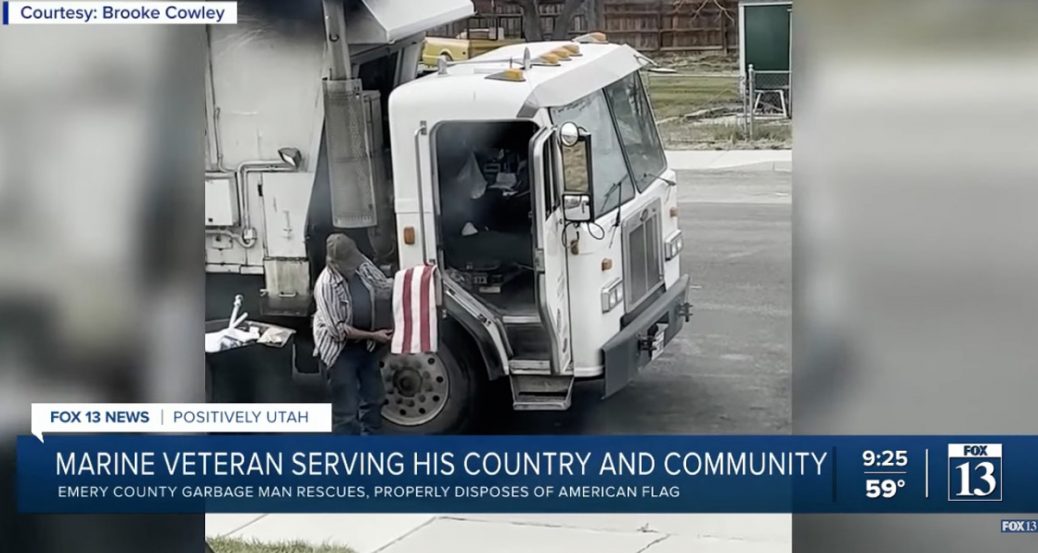 A garbage man from Utah has garnered high praise for being caught unbeknownst on video caring for a discarded American flag during his daily pickup.

The waste management worker, Don “Munch” Gardner, found the flag in the garbage outside a home. But instead of just tossing it, he took the time to honor the aged banner, folded it carefully, and treated the national symbol with the utmost respect.

Gardner was filmed during his act of patriotism, but he was totally unaware that the camera lens was watching, Fox 13 reported.

Homeowner Brooke Cowley, of Huntingdon, Utah, admitted that she made a huge mistake in how she treated the discarded flag.

“I was a complete idiot! I was cleaning our porch while the kids did an Easter egg hunt. I threw away our flag and pole because it had broken and ripped,” Cowley wrote on Facebook. “Then I witnessed our ‘garbage man’ stop get out of the truck, unhook the flag and take the time to fold it!”

But when Gardner, a Marine Corps veteran, pulled up in his truck, she got a lesson in patriotism:

For his part, Gardner said he sees flags thrown away carelessly quite often.

“I took an oath once to defend this country and our flag, and I still do,” Gardner said. “A lot of people died protecting that flag and fighting under that flag. A lot of blood’s been shed so that we have the freedoms that we have today.”