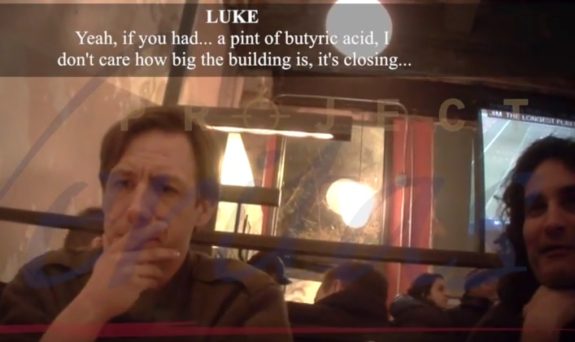 In a moment of pure and simple domestic terrorism caught-on-tape (the entire video can be seen below), liberal radicals were caught on tape over the weekend planning to gas Inauguration attendees at various festivities beginning this Thursday in Washington D.C.

Luke Kuhn, member of leftist front group D.C. Anti-Fascist Coalition, was captured on tape over the weekend revealing details of their plan to disrupt the Inauguration with “butryic acid” and to stop attendees from participating in the weekend’s events by “blowing all the sprinklers” on Inauguration Night.

“Yeah, if I had… a pint of butyric acid, I don’t care how big the building is, it’s closing,” the leftist domestic terrorist said. “You take with a plunger and put the rubber bands, a safety pin thing, so all you got to do is pull the pin, press the plunger and the whole can discharges.”

Kuhn’s accomplice in crime, Scott Green (also of the D.C. Coalition), then chimes in “And this stuff is very efficient. It’s very, very smelly and a little goes a long way.”

The third member of the group who is caught on tape, Colin Dunn, adds to the planned chaos by describing their attempt to “get all the sprinklers to go off at once. There’s usually like a piece of fusible metal or a piece of glass with liquid in it that will blow.”

They continue to elaborate on their ultimate goal of disrupting Donald Trump’s Inauguration by any means necessary as they articulate a plan to “to make the whole inauguration a giant clusterf**k” and are trying to get authorities to “pull the entire inauguration aside.” Kuhn, the original domestic terrorist caught on tape, concludes his description of their plan to be: “The message has to be we do not recognize the city or the government either. If you try to close us down we will look for your house, we will burn it. We will physically fight the police if they steal one of our places. We will go to war and you will lose.”

I’m not sure how the Democrats will attempt to spin it but the video and transcript is clear: Democrats are planning various domestic acts of terrorism over Inauguration Weekend. Be careful to those who are attending over the weekend, remember to always be vigilant as we the people defend our country from enemies foreign and domestic, and report anything you see to the authorities immediately.