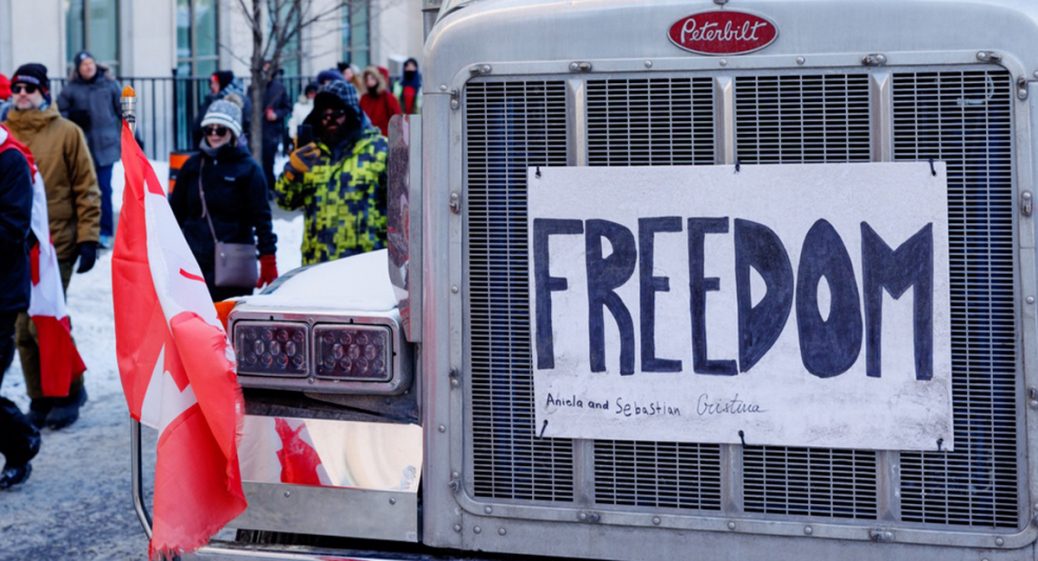 The Washington Post is taking flack for an article that claims that the Freedom Convoy is made up of “racists” who use the word “freedom” as a code word for “white supremacy.”

The article, entitled, “The Ottawa trucker convoy is rooted in Canada’s settler colonial history,” and is written by leftist Taylor Dysart – a Ph.D. candidate in the department of history and sociology of science at the University of Pennsylvania.

“The convoy has amassed significant support; its (now removed) GoFundMe raised more than $10 million (CAD) and it has been celebrated by several center-right and right-wing public figures, including Elon Musk, Joe Rogan, and former President Donald Trump. The Freedom Convoy now touts itself as an ‘Anti ALL MANDATES Movement,’ desiring to remove all public health mandates,” Dysart exclaimed.

But, Dysart says it isn’t about freedom, or health, or mask mandates. It’s all about raaaacism.

“While the convoy’s supporters have characterized the protest as a peaceful movement, uninformed by ‘politics, race, religion, or any personal beliefs,’ many supporters have been associated with or expressed racist, Islamophobic, and white-supremacist view,” this ignoramus wrote.

“The convoy has surprised onlookers in the United States and Canada, both because of the explicitly racist and violent perspectives of some of the organizers and because the action seems to violate norms of Canadian ‘politeness,'” Dysart continued. “But the convoy represents the extension of a strain of Canadian history that has long masked itself behind ‘peacefulness’ or ‘unity’: settler colonialism.”

“The primarily white supporters of the Freedom Convoy argue that pandemic mandates infringe upon their constitutional rights to freedom,” the WaPo writer continued. “The notion of ‘freedom’ was historically and remains intertwined with whiteness,” this fool blared.

But, as The Blaze noted, the paper was blasted for its lies.

Associate editor Liz Wolfe: “When you call everything ‘white supremacy,’ the term ceases to have any effect whatsoever.”

Political commentator Dinesh D’Souza: “If freedom is a white supremacist notion, as this @washingtonpost article insists, what should we be aiming for instead? Unfreedom? Incarceration? Slavery?”

Sen. Tom Cotton (R-Ark.): “Why do conservatives want to keep critical race theory out of schools? Because it leads to the insane belief that ‘one’s entitlement to *freedom* is a key component of White supremacy.'”

This Dysart maggot is pure scum. Just like all his woketard kind.