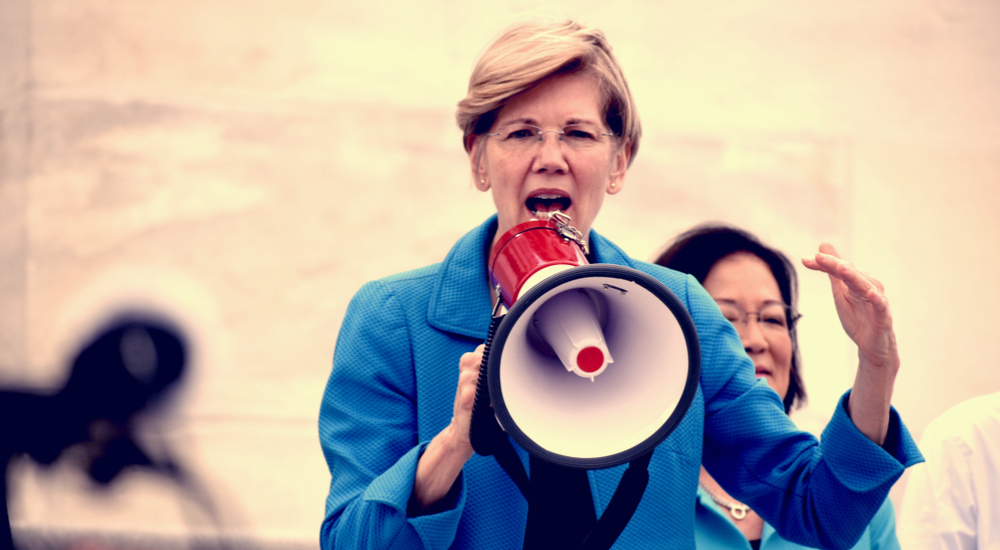 Massachusetts Sen. Elizabeth Warren used the bitter cold sweeping the Midwest and Northeast to announce her full-throated support for a “Green New Deal” climbing on the Alexandra Ocasio-Cortez Express.

“Our children and grandchildren should grow up in a world where they can breathe the air and drink the water – and go outside without risking their lives in extreme temperatures,” the Democrat tweeted Thursday using the “Polar Vortex 2019” as yet another “Warren Hate Target.”

The “Polar Vortex” event refers to an atmospheric phenomenon that’s brought extreme, record-breaking cold to millions of Americans, with temperatures 10 to 20 degrees Fahrenheit below zero and wind chill down in the negative 50s and 60s. It’s the coldest weather many states have seen in decades, meteorologists say.

Chicago hit negative 23 degrees Fahrenheit, which is the coldest since 1985. Mount Carroll, Illinois, recorded negative 38 degrees, which, if certified, would be the coldest temperature ever recorded in the state.

“It’s time to protect our planet and pass a Green New Deal,” declared Senator Warren, who is running for President in 2020 in spite of claims she is only considering it. “Considering” reduces to, “Will enough people and organizations come up with the money?”

That Senator Warren could even think of such a campaign tells us that she has no anchor, attachment or hook on reality, but then after hornswoggling the University of Pennsylvania into her being a “native American” when she looks as Northern European as “Pippi Longstocking” the mythical Super Swede of Scandinavian children’s books proved that academics are big suckers for a pretty face with a fantasy for sale. That she could pull it off at Harvard College further proves they are bent over double with “white privilege” guilt.

Meanwhile back at the story: The implication is that global warming is behind the record cold that has forced factories to shut down, schools to close and halted natural gas deliveries as the product freezes in the unusually cold temperatures across the country. Federal climate scientists and atmospheric science grant getters promote this idea as their livelihoods depend on it, but:

If we take a 10,000 molecule sample of the atmosphere including 7800 nitrogen molecules, 1800 oxygen molecules, we would have 400 “trace” molecules and four would be CO2! Please tell us how four molecules are going to drive 9,996 to the greater activity we feel like a rise in temperature? It is just that simple!

“Man-caused global warming” and “climate change” are a big fraud for money and power. And, so are Jim Hansen, Joe Romm and all the other social/economic/political parasites that have gotten wealthy on our work and taxes, much of which has been wasted on war. Meanwhile, the lies continue…

“The bottom line is that folks claiming that cold waves are increasing in the U.S. are ignoring observations and the peer-reviewed literature that state the opposite,” University of Washington climate scientist Cliff Mass told The Daily Caller News Foundation on Tuesday. Sorry, Cliff, we have data chart after data chart showing that we are now in a temperature decline and we even know why.

The sun is evolving into a body with more heavy atoms than it has had and in that process the sun’s temperature changes. It is now entering a falling temperature phase and is 45,000 years overdue for a major decline. This may be a signal an ice age is coming. It may not, but we will not know for some time.

This is the first time Elizabeth Warren endorsed a “Green New Deal.” Her 2020 election hopeful’s staff claim she endorsed the “idea” of a “Green New Deal” in a classic Obama “Leading From Behind” maneuver. Other 2020 Democratic hopefuls, including Sens. Kamala Harris of California and Cory Booker of New Jersey, endorsed the proposal like a bunch of lemmings running for a cliff.

Elizabeth Warren and her ilk are despicable and if they were to win on all their lies, even God cannot help America. Hopefully, it will not come to that as Elizabeth Warren turns green.