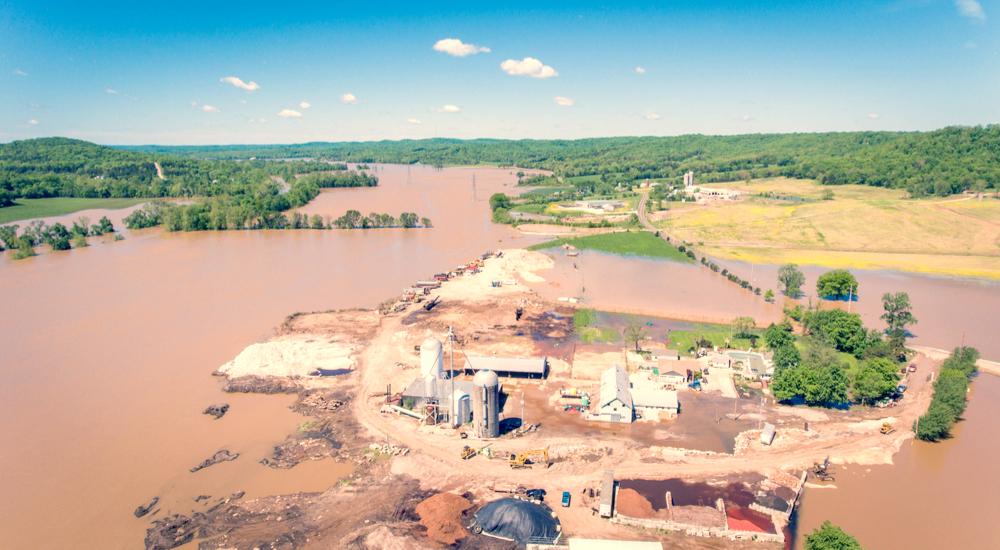 Warning to Midwestern Farmers! Do Not Sell! Deep State is Undermining You! Henry Kissinger’s 1974 Plan for Food Control Now Underway!

A massive deluge of rain and melting snow from a “bomb cyclone” and other recent storms is inundating several Midwestern states including Iowa, Illinois, Missouri, Kansas, South Dakota, Minnesota, and Nebraska.

The flooding has killed at least three people and caused at least $3 billion in damages so far. Rising water levels have breached levees along the Missouri River and forced several towns to evacuate. In southern Minnesota, flood impacts are expected to increase substantially for the next three days, according to MPR News. In Nebraska alone, the flooding has already caused more than $1 billion in damages, with more than 2,000 homes and 340 businesses lost.

Vox.com reports: But on Thursday, the National Oceanic and Atmospheric Administration’s spring outlook reported that the situation for the central US is soon going to get much, much worse.

“The extensive flooding we’ve seen in the past two weeks will continue through May and become direr and may be exacerbated in the coming weeks as the water flows downstream,” said Ed Clark, director of NOAA’s National Water Center in Tuscaloosa, Alabama, in a statement. “This is shaping up to be a potentially unprecedented flood season, with more than 200 million people at risk for flooding in their communities.”

The Nebraska State Patrol tweeted: “None of this is supposed to be under water. Here’s what the Missouri River looks like just across from Nebraska City into Iowa. If you ever drive to Kansas City, you’re probably familiar with this interchange of I-29 and Highway 2. The Missouri looks like an ocean.#NSP575 .“

So where is the Army Corps of Engineers and their flood control measures in all of this? They are merely the same as they have been for some time: Under the control of Deep State royalty George Soros!

Here’s how it works. Elite Deep State investors receive a tip that an area of the U.S. Is going to appear as a natural disaster. Of course, the “natural disaster” in truth is manufactured by a cabal of profiteers, knowing that American infrastructure can indeed, in itself, cause America to fall if it sustains much more “natural-disaster” damage.

Deep State investors then go to the Chicago Mercantile Exchange to buy “weather derivatives” to hedge their bets on a specified locality of the United States. (Beware of anything that says “derivatives” which is usually an indication of anti-American NWO investment opportunity.)

With this accomplished, HAARP near Anchorage, Alaska, now proceeds to send its ELF waves to fulfill the order, in tandem with nano-tubed Shell-supplied chemtrail chemicals poured into the jet stream. While still available, click here to order your emergency copy of Angels Don’t Play This HAARP: Advances in Tesla Technology by Dr. Nick Begich and Jeane Manning.

The bottom line is that weather-modification technology originally patented as an altruistic measure to help farmers now turns against them as “weaponized weather” to ruin farm and ranch lands, forcing victimized farmers and ranchers to sell to foreign buyers while decreasing American sovereignty over these afflicted areas.

So after weather derivatives are purchased and HAARP in league with Shell-chemical chemtrails poured into the jet stream via nano-tubing, the epic floods are manufactured. An effective Army Corps of Engineers is nowhere to be found, other than in areas where they are soon deemed dysfunctional.

And now. The Deep State profiteering and buyout begins… Elite NWO investors go to the Obama-backed Chicago Mercantile Exchange and collect their “weather derivative” insurance on the targeted areas. Meanwhile, Soros-backed realtors go to the targeted areas and buy cheap the flooded farmlands and ranch lands, then sell to foreign investors for 16% profit, in the process giving more US Sovereignty away while building up the anti-Constitutional, anti-nationalistic New World Order.

However, farmers and ranchers must NOT give in to the temptation to sell off! HAARP in Alaska is the farmer’s and rancher’s worst enemy and must be dealt with before American infrastructure is crippled beyond repair.