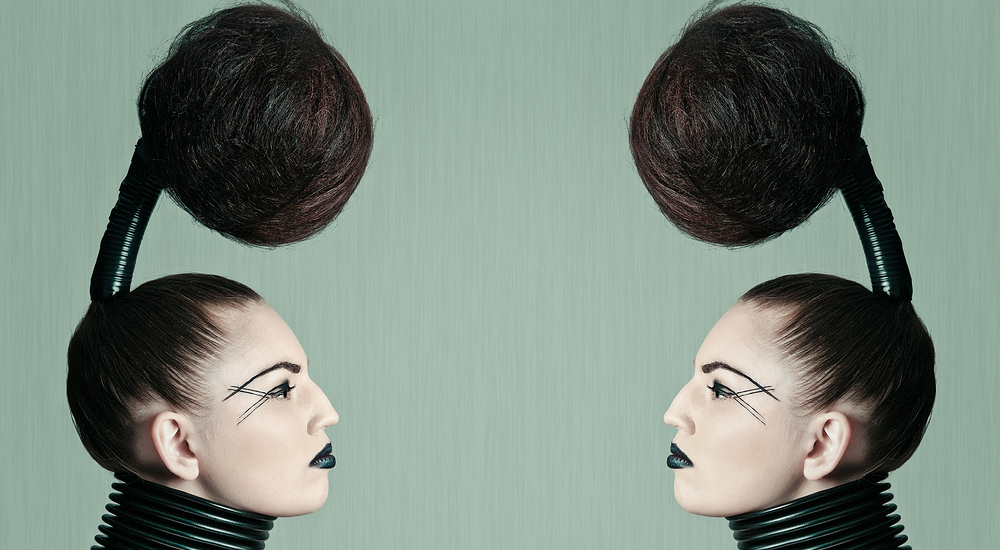 I see HAIR everywhere, LOTS and LOTS of HAIR: big hair, stringy hair, frizzy hair, straightened hair, hair in coils, swivels, man-buns, ponytails, and all kinds of other weird formations, covering faces and making people look like walking … mounds… of… hair.  But let me start with the straight-and-stringy hair.

First of all, we have Jennifer Anniston to thank for the pancake-flat hairstyle, accompanied (at least on her part) by the self-consciously nervous “push the hair out of my face” gesture that made her famous.  As always, when one woman is celebrated for a particular hairstyle, millions of other women rush to copy it, never bothering to assess whether they have the right features to carry it off.  Not since Farrah Fawcett’s feathered tresses (in the 70’s) had a female celebrity’s hairstyle inspired such mindless mimicry, but at least the Farrah look was a style.  Many (if not most) of the Jennifer wanna-be’s, who are unfortunately still with us today, look like witches, with their straw-like mats of hair veiling their faces like the hijab — but a lot less gracefully.  Even at ages 60 and 70, an age when women of previous generations had settled into wisdom and ceased trying so hard to keep up with the silly trends of younger women, eerily long hair is maintained dutifully.  “She looks like Morticia from ‘The Addams Family,'” one woman said in response to just such an older woman’s fashionably plain-Janey hairdo, in this case long black hair pressed upon her pale face so tightly that it looked as if she had flattened it with an iron!

I was never quite sure what inspired this let-it-all-hang-out mentality, but clearly it is a by-product of feminism, a resistance against the ornamental aspect of femininity… as if to say that letting your hair grow out, without even the slightest attempt to style (and in many cases, comb) it, is a proclamation of the “naturalness” that this generation cherishes with such preposterous fervor.  But what it actually is, in my opinion, is a harsh, severe expression in hair of the inner state of many modern women: perhaps many of their inner selves have been flattened just as ruthlessly as their hair, by forces quite beyond their conscious control.  I had learned long ago that the outer and inner are inextricably weaved in ways that most of us do not understand, and there is nothing more corroborative of this than the disastrous state of modern women’s hair.

As with everything else in this sickeningly politically correct era, hair has become racialized; I have noticed that black women either straighten their hair to look like white hair (even while maintaining the separateness of a decidedly “African-American” identity), OR, in more recent times, let their hair grow out to such an absurd degree that some of them look like poorly-tended gardens rife with an overgrowth of weeds and other nameless shrubbery.  These are the only black women who seem to be allowed on television commercials, because their 75 lbs of hair are visual signs of the racial “diversity” that the Left-controlled media loves to shove down our throats every chance they get.  I saw one such black woman one day, live and up-close, and after she passed I turned to a pair of other black women (who had also noticed her hair and scoffed among themselves) and joked, “Gosh, if someone threw that woman upside-down out of an airplane, she’d bounce back up to Jupiter!”  We all laughed so hard that our stomachs hurt, and tears began falling down our faces.  I should note, as I write this, that these black women had much less pronounced hairdos: short, well-tended Afro’s which fit their features perfectly and did not need the aid of dyes or other artificial substances.  (Hooray to the women who resist this hair-based madness!)

I understand that in an era of massive conformity and identity dissemination, people — particularly women but also some men — are desperate to express the little piece of themselves that can be differentiated from all others around them.  All too often, this is done strictly through hair, and the rest of them seems so utterly ordinary that the incongruity between the one and the other is so obvious that it is laughable.  “There are more significant rebellions than letting your hair grow out,” I want to say every time I see one of these women (of any race), but I know that few would grasp the meaning of this statement and many might even attack me.

Few women in this era have the softness or femininity that is necessary to carry off the straight-haired look, and many of the others have more hair than self.