VP Pence – No more “Budget Cuts” to the Military 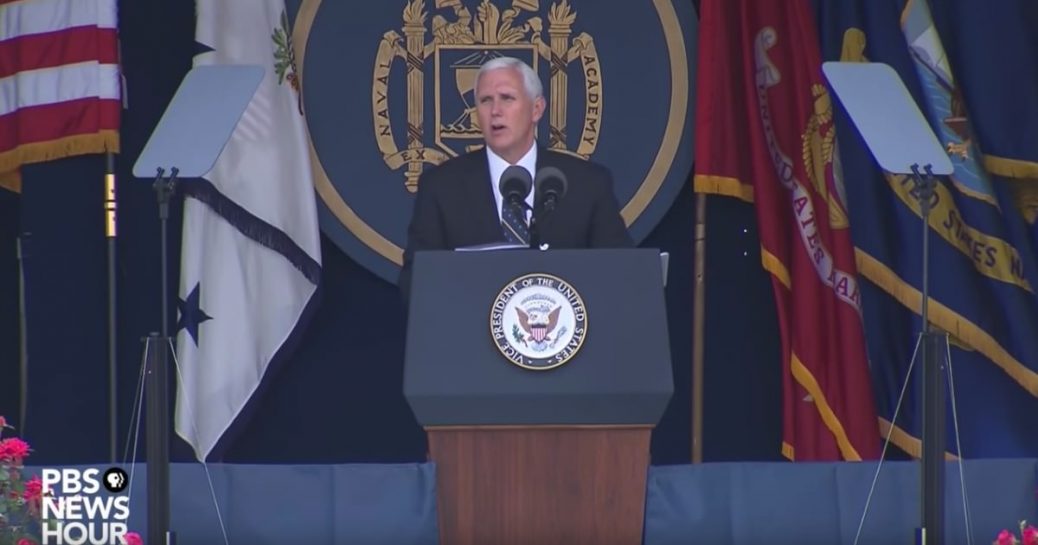 Vice President Mike Pence delivered the commencement address to the US Naval Academy. It was a rousing success and the graduates of the Naval Academy treated the Vice President with far more grace, class, and decorum than the spoiled brats at Notre Dame did. (You can see Pence’s entire speech to the Naval Academy here.) The speech was full of red meat, and patriotism but there was one spot in particular that should be given attention… when VP Pence promised that the era of military budget cuts was over.

I truly believe that as you pursue these qualities of character, you will lead with distinction. And as you’ve done to this moment in your life, you’ll prove yourselves worthy of the trust that your Commander-in-Chief is placing in you today, to be faithful defenders of our nation and our way of life.

And as you prepare to assume your duties, I want to say to the new officers and to your families, President Donald Trump is the best friend the Armed Forces of the United States will ever have. (Applause.)

And I’ll make you a promise, no matter where you’re called to serve, no matter what the mission, this Commander-in-Chief will always have your back. (Applause.)

And to the families who are gathered here today and all these rising officers, I say President Donald Trump and I will not rest, we will not relent until we rebuild our military, restore the arsenal of democracy, and ensure that our soldiers, sailors, airmen, Marines, and Coast Guard have all the resources that you need to accomplish your mission and come home safe. That is our pledge to each of you. (Applause.)

Earlier this month, President Trump signed a $21 billion increase in funding for our armed forces, the largest investment in military readiness in nearly a decade. And earlier this week in his very first budget, your Commander-in-Chief laid out one of the largest increases in defense spending since the days of President Ronald Reagan. Let me be clear: The era of budget cuts of the Armed Forces of the United States is over. (Applause.)

The President’s budget increases funding for our national defense by $54 billion, provides more than 56,000 new servicemembers, and begins to rebuild our Navy with eight new battle-force ships headed for the sea. (Applause.)

President Trump is working with the Congress to make the strongest fighting force in history stronger still. And with renewed American strength, your Commander-in-Chief is once again reaffirming America’s role as leader of the free world.

While we must always work, and hope, and pray for peace, the best way to ensure peace is for our adversaries and our enemies to know that America is prepared to lead and fight and win any contest, any struggle anywhere on behalf of freedom.