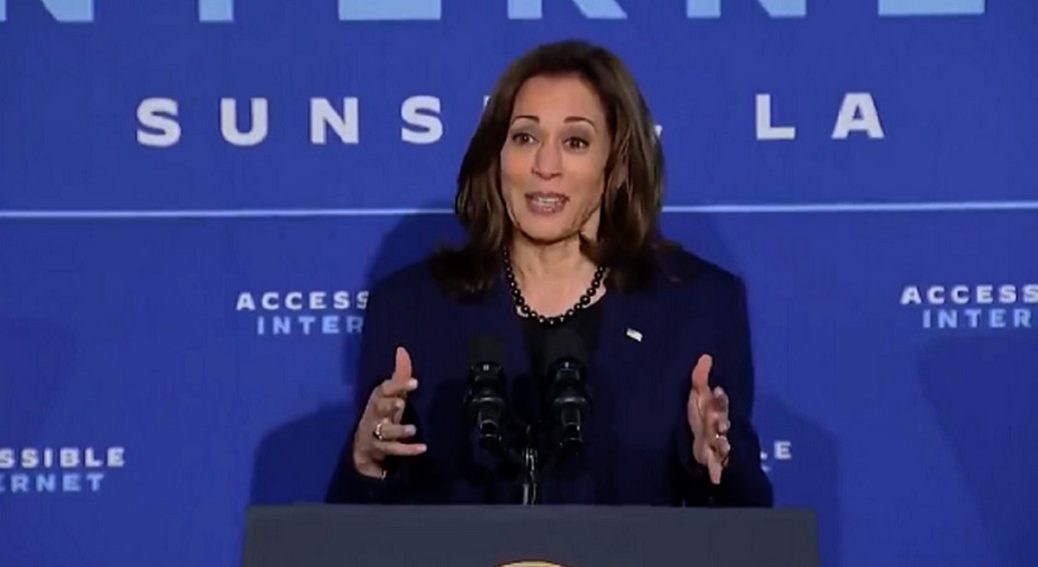 On Friday, Kamala Harris discussed aid for hurricane Ian victims with Indian actress Priyanka Chopra. The discussion was held on stage at the Democratic National Committee’s Women’s Leadership Forum. The VP said “communities of color” should get be the first communities to receive Federal aid to rebuild in the wake of Hurricane Ian.

“It is our lowest income communities and our communities of color that are most impacted by these extreme conditions,” she said during the Democratic National Committee’s Women’s Leadership Forum.

“We have to address this in a way that is about giving resources based on equity, understanding that we fight for equality, but we also need to fight for equity,” she added.

Shouldn’t communities that suffered the most destruction get the aid first? Like most liberals, Harris doesn’t understand our founding documents. In this case, she misinterprets this part of the Declaration of Independence.

We hold these truths to be self-evident, that all men are created equal, that they are endowed by their Creator with certain unalienable Rights, that among these are Life, Liberty and the pursuit of Happiness. (Thomas Jefferson: Declaration of Independence)

When Thomas Jefferson wrote, “All men are created equal.” It didn’t mean everyone should have the same stuff, intellectual capability, social background, physical strength, etc., that we are all equals doesn’t ‘mean, as the liberals ascribe to, that when it comes to talents, predilections, intelligence, natural abilities we are all equal. Nor does it mean we all should have the same big screen TV, wireless internet, or savings account balance. When he wrote those words, Jefferson meant everyone should have the same opportunity to be as good as they can be with the cards with which they were born.

After equality, the declaration says we are”endowed by their Creator with certain unalienable Rights, that among these are Life, Liberty, and the pursuit of Happiness” Rights come from God. The government has no power to make changes to those rights. The  Constitution was written to add to those rights. The Constitution was written to protect those rights from being taken from the government. Protecting those rights is at the heart of America’s freedom. And one of the reasons that despite the far left’s attempt to change the freedoms America was based on, even citizens who like a particular program object based disabling the Constitution. A good example is the recent Supreme Court ruling on Abortion. Many in the pro-Abortion bloc claim it was a violation of the Constitution.

Kamela’s statement says that govt has the right to violate Life, Liberty, and the pursuit of Happiness. Still, the Declaration of Independence doesn’t say those right only apply to some people. Sadly for the first 75 years of our nation, those rights were stepped on and only applied to Caucasians.

“Some people believe Kamela’s strategy is partly a reparation for slavery. This is something with which I agree. I believe anyone born before the Emancipation Proclamation was issued (Jan. 1863) should get a break from the government hurricane aid and many other programs.

There is nothing “fair” or American about “equity.” By equity, leftists mean that white people are evil and get too many breaks while people of color get extra breaks. to meet those goals, something must be done to knock white people down a notch. This is a racist policy that assumes people of color cannot be successful without government help.

This is false. @VP's rhetoric is causing undue panic and must be clarified. FEMA Individual Assistance is already available to all Floridians impacted by Hurricane Ian, regardless of race or background. If you need assistance visit https://t.co/x9X8AstnzL or call 1-800-621-3362. https://t.co/idsw1PX86x

The NY Post reported that others agreed with Ms.Pushaw:

Sadanand Dhume, a fellow at the American Enterprise Institute, added that “real people don’t talk like this. “If a hurricane hits a state, we should expect the government to help all those affected: black, brown white, purple, green,” he said.

Even Elon Musk, the world’s richest man, agreed,  saying resource allocation “should be according to greatest need, not race or anything else.”

Agreed. Really disgraceful to see her priorities when folks have lost their homes, and some even their lives.

This controversy raised by her racist statement proves that VP Harris doesn’t know or understand the freedoms guaranteed in America’s founding documents. Documents that made America the bastion of liberty in the world. Kamala’s statement was unbecoming for a Vice President of the United States.