The Liberals on the Left loudly insist that voter fraud does not exist and if it does the number of instances is so minuscule that it cannot influence elections in anyway.

That claim by the Left is simply not true. In fact there are so many ways that the voting process can be manipulated that the potential to influence elections is significant. This is especially true when, under the Obama Administration the FEC, IRS, DOJ and every other Federal agency, and some state and local governments and departments actually have an open ”Mission Statement” to influence elections in every way that they can. The DOJ, known as the Department of Injustice during the Obama Administration, not only refuses to prevent voter fraud and vote manipulation, it facilitates it when it benefits the Left. In fact under Eric Holder the Department of Injustice ”policy” regarding voter fraud and voter intimidation became, “there is no such thing as voter intimidation or voter fraud if it is against white people”.  A former DOJ career attorney, J Christian Adams documents this in his book, “Injustice”. Here is one quote from the book, “Unfortunately, despite the best efforts of many DOJ attorneys, DOJ officials have repeatedly chosen not to enforce the law faithfully – and often deliberately take the side of the wrongdoers –in corrupt displays of racial and political favoritism”. A perfect example of this was Eric Holder throwing out the voter intimidation convictions of the Black Panthers in Philadelphia during the 2008 election. They stood outside the door of a polling place in full Black Panther uniform and banged “night sticks” on the side walk while yelling, ‘you ain’t voting here today if you are not voting for Obama”. Their actions were videotaped and a career civil rights attorney who witnessed it said it was the most blatant case of voter intimidation he had ever seen. As I watched the video replayed on the news I saw elderly black people reduced to tears it upset them so much. The results of  Eric Holder throwing out the Black Panther convictions was an increase in the number of open voter intimidation activities being  reported in a number of states in the 2010, 2012, and 2014 state and national elections, with no follow up by the Department of Injustice.

The IRS illegal targeting of conservative groups prior to the 2012 election was so massive that it clearly influenced the election in Obama’s favor. Over three hundred conservative groups (that we know about) were prevented from operating. No organizing, no fund raising, no activity at all. In fact some of the individuals trying to organize a group were harassed individually. One person had their personal tax returns and their business tax returns audited (Federal and state), their business was “inspected” by OSHA, and the BATF audited their business (they had a patent to make a part of a gun but never made one). The woman working to organize the group somehow got a copy of a letter Elijah Cummings sent to the IRS urging them to take action against these groups and filed an Abuse of Power complaint against him, which went NOWHERE!

Unfortunately, as with Fast and Furious and Emailgate, IRS records were openly and illegally destroyed, people lied under oath, people refused to testify before Congress, people refused to produce records, and Obama issued illegal executive orders and then  the Department of Injustice ruled that no one should be prosecuted.

Regarding the illegal IRS targeting of conservative groups, one of the key individuals involved, Lois Lerner originally worked at the Federal Election Commission where it has been documented that she actively worked to illegally influence tight elections between Republicans and Democrats.

Another way the Department of Injustice works to influence elections is its constant efforts to prevent states from requiring ID to register to vote or vote. The Department of Injustice also works constantly to prevent states from purging their voter rolls. As a result some voting precincts have more registered voters than actual eligible voters living in the precinct. It has also been documented that many people are actively registered to vote in more than one precinct. I am absolutely convinced that the only reason to be opposed to voter ID and allowing states to maintain current and accurate voter rolls is a desire to allow voter fraud. 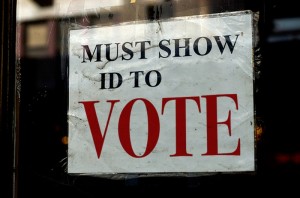 Regarding Voter ID, only 31 states require some form of voter ID. That leaves 19 states and Washington, DC that do not require voter ID. In some of these states you can register and vote the same day! When you can register to vote on line or by mail, and then vote without ID there is clearly a potential for voter fraud.  Recently there were three cases of documented voter fraud. One was in Richmond Virginia where a voter registration office employee noticed a new registration for a dead person that she knew personally. After further investigation it was discovered that 21 fraudulent voter registrations were submitted by a local college voter registration group.  Another was the Washington mall shooter, who was a legal resident but not a U.S citizen. He voted in the last three elections. Washington State uses the honor system to register and vote. Another was the Indiana police raiding the offices of a voter registration group and finding hundreds of fraudulent voter registrations in nine counties.

Another way the Obama Administration influences elections is through legal (?) immigration. People who meet certain requirements such as investing a minimum amount of money in a U.S business that creates or maintains a minimum number of jobs are given a pathway to citizenship for themselves, their spouse and children under 18. The Obama administration has been very aggressive and “loose” with this program Want to guess who these people vote for?

And we also recently saw how the Department of Homeland Security “erroneously” gave over 1900 immigrants (that we know about) citizenship when they were tagged to be deported! Want to guess who they will vote for?

Terry McAuliffe, a Clinton insider and current Governor of Virginia  signed an executive order restoring the voting rights to over 200,000 convicted felons but a federal judge ruled the order illegal. Terry quickly issued a new order. Want to guess who the majority of these people will vote for?

And then we have the Supreme Court’s “Citizens United” decision, which is now the Left’s favorite thing to be furious about.  This decision allowed both sides equal access to certain forms of campaign money. Before this ruling the Left had the support of corrupt union money and happily accepted money from anyone including people like George Soros’ unlimited money. Now they are furious that the Supreme Court ruled that it was free speech for corporations to have  the same ability to be involved in elections as corrupt unions do and an opportunity to legally compete with illegal dollars being poured into elections for the Left (George Soros, etc.).

All you have to do is a goggle search to see what I just wrote about and to see that the Left is absolutely lying to us about illegally influencing elections. Some people believe, and I am one of them, that Romney would have been elected if the IRS had not illegally targeted the conservative groups before the 2012 election. The numbers do not lie.

I firmly believe this Presidential election is our last chance to save America!