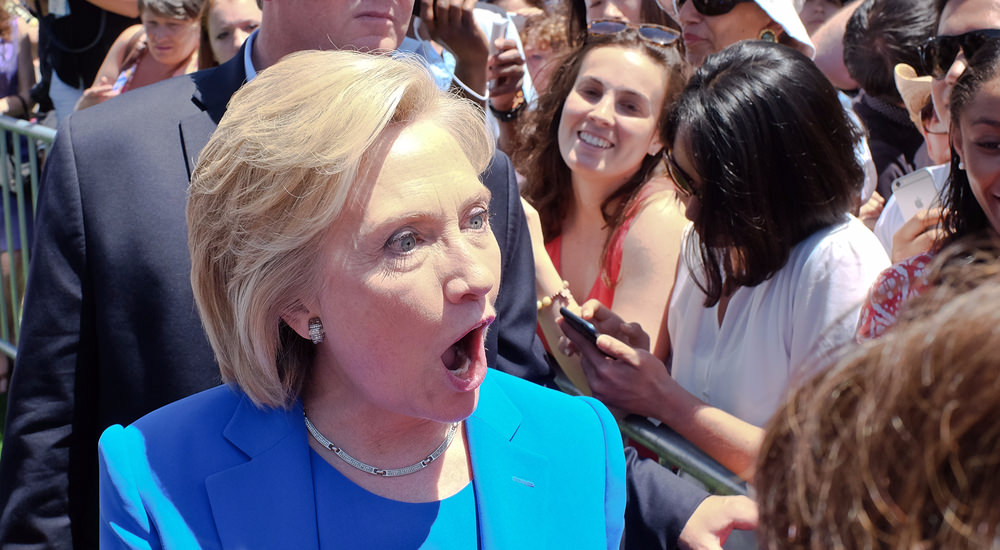 The following reads like an absurd novel.  But it’s true, if not in every detail, at least in general.

Despite an adulthood full of illegally selling political influence stretching back to Arkansas in the 1970’s, Hillary Clinton managed, after years of trying, to get the Democratic Party to take heed of her demand to “deal me in”.  Into the Democratic Party’s nomination for President of the United States.

Ahead in most polls, up until early Friday afternoon it seemed as if Hillary would soon be our President.  Then FBI Director Comey announced that the FBI is re-opening a years-long investigation into Clinton corruption that should never have been closed last July.  Back then, Congressman Trey Gowdy’s direct yes-no questions to Comey revealed that Clinton had repeatedly lied to America and the FBI, had illegally compromised national security information, had destroyed information under subpoena and had obstructed investigators at every step.  But this list of crimes wasn’t enough for Comey to indict — although others have been jailed for lots less.  Rumors have since circulated that the FBI rank and file was up-in-arms regarding what appeared and probably was an investigation steered by the Department of Justice, maybe even at the behest of Barack Obama.  A few weeks later Clinton brazenly calls these results “exoneration by the FBI.”    Weeks pass.  Trump gets hammered for locker room talk — as if the white-man’s version of the black man’s game The Dozens has any sort of importance to America going forward.  More time passes.  And viola, an independent “sexting” investigation of disgraced former Congressman Anthony Weiner, husband of top-Clinton-aide Huma Abedin, uncovers a trove of emails that substantially add to the evidence against Clinton and her top aides.  Then Comey faced a no-win choice in the context of knowing that his agency went into near-revolt over his previous decision.  He knows there is no perfect time to go public – he knows others will leak this blockbuster news — and he knows he’s repeatedly promised transparency to the greatest degree possible.  Comey goes public and the world learns in its heart-of-hearts that Hillary Clinton is seriously crooked. Yet the Clinton campaign gamely works to create with some sort of story aimed at confusing the many low-information voters that she needs to win.  Complicating everything is that many have already voted.  But just like Hillary, the next thing she does is lie yet again — erroneously claiming Comey sent notifications only to Republicans in Congress and not to Democrats.

The seminal issue at this point is that despite the biggest electoral scandal ever, fortunately breaking in a few days before Election Day rather than later, it’s not a sure thing Hillary will lose.  If she’s elected, she may be arrested for multiple felonies while President-elect.  In this chaos, what will Obama do?  What will Clinton do?  What will Trump do?  What will Putin do?  What will Kim Jong-un do?  What will the mainstream media do?  What will average Americans do?  Chaos will reign.  America will face its greatest Constitutional crisis since the Civil War, when Abe Lincoln was president, over 150 years ago.  Emboldened acts by international belligerents like Putin, Kim Jong-un, and the mullahs in Iran are almost assured. The stock market may tank.  A major run on the dollar is possible.  Chaos.

Every voter needs to look in the mirror and ask her- or himself…  Is Hillary worth it?  Really?