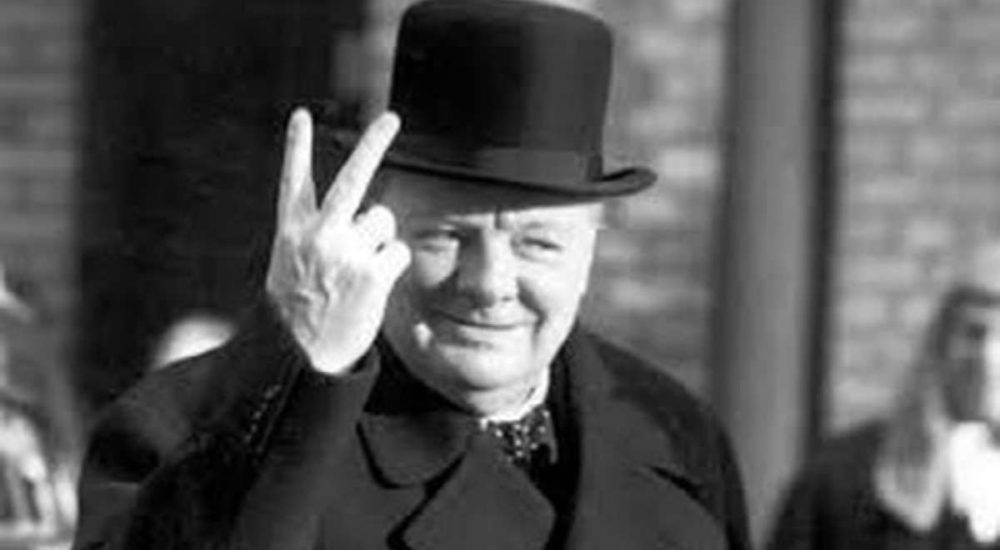 Winston Churchill, the wartime Prime Minister of England, was a statesman, a visionary and a fighter.   At the darkest hour in Britain’s history, when it looked like the Germans might invade England, he had this to say, “We shall defend our island, whatever the cost may be, we shall fight on the beaches, we shall fight on the landing grounds, we shall fight in the fields and in the streets, we shall fight in the hills; we shall never surrender. “   In a book he wrote in 1899 he took the measure of Islam and said this…”How dreadful are the curses which Mohammedanism lays on its votaries! Besides the fanatical frenzy, which is as dangerous in a man as hydrophobia in a dog, there is this fearful fatalistic apathy. The effects are apparent in many countries, improvident habits, slovenly systems of agriculture, sluggish methods of commerce, and insecurity of property exist wherever the followers of the Prophet rule or live.

A degraded sensualism deprives this life of its grace and refinement, the next of its dignity and sanctity. The fact that in Mohammedan law every woman must belong to some man as his absolute property, either as a child, a wife, or a concubine, must delay the final extinction of slavery until the faith of Islam has ceased to be a great power among men.   Individual Muslims may show splendid qualities, but the influence of the religion paralyses the social development of those who follow it. No stronger retrograde force exists in the world. Far from being moribund, Mohammedanism is a militant and proselytizing faith. It has already spread throughout Central Africa, raising fearless warriors at every step; and were it not that Christianity is sheltered in the strong arms of science, the science against which it had vainly struggled, the civilization of modern Europe might fall, as fell the civilization of ancient Rome.

In the fourteen hundred-odd years since the beginnings of Islam, there has never been true peace, according to the Quran…that peace can only be achieved when all the world is Islamic and the infidels have been converted or killed.   Such are the teachings of the religion of peace.   In my opinion, and according to a dictionary definition, Islam is a cult, not a religion.   Here’s the definition…”a religion or sect considered to be false, unorthodox, or extremist, with members often living outside of conventional society under the direction of a charismatic leader.”   If that doesn’t accurately describe Islam I don’t know what does.   That cult goes against everything that civilization proposes and lives by.  No other faith that I’m aware of does such terrible things against other human beings as does Islam, and it’s done by the true believers.   We may want to believe that there are so-called moderate Muslims, but if they exist, they do not speak out for fear of being killed by the radicals.   Should a Muslim, at some point, decide that they want to explore outside of Islam, they may be subjected to torture or death for some of the most unimportant things…like wearing “western” clothing, or listening to “western” music,  and in the case of women, talking to a male not a member of the family.   The restrictions of this horrible cult are many.

In the centuries following the rise of Islam, their advances throughout North Africa and even into the continent of Europe were rapid…and deadly.   Had it not been for the battle of Tours in 732, and the Frankish leader, Charles Martel, who defeated a huge invading Islamic army, the Muslims might have gone on and conquered the entire continent and most of the rest of the western world would be speaking some Arabic dialect now.   The Battle of Tours or Battle of the Palace of Martyrs, ending the “last of the great Arab invasions of France,” a military victory termed “brilliant” on the part of Charles Martel, who was often referred to as “the Hammer” because of that battle.   Apart from the military endeavors, Charles is considered to be a founding figure of the European Middle Ages.   Charles’ grandson, Charlemagne, extended the Frankish realms to include much of the West, and became the first Emperor in the West since the fall of Rome.   Martel is called  “the hero of the age,” and  the “champion of the Cross against the Crescent.”    It would seem that Churchill was correct in his assessment of the cult, even way back over 117 years ago.

It never ceases to amaze me that there have been people, and there are some even now, who have been visionaries.   Call it research, call it guessing, but whatever it is, there are these statements made about different aspects of our world, and for the most part, they’re coming true.   In 1899 it was Churchill and the Muslims, in 1949 it was George Orwell with his “1984”, even earlier was H. G. Wells and his “Things To Come”, then in 2006 it was Mark Steyn writing “America Alone”.   They may have differed in the subjects, if you read what they have written, and see what is happening, you have to take a moment and realize that America is threatened.   Lawrence Hunter, writing in Forbes said this in April 2012, “The American experiment in Liberty has failed.”   Perhaps, but if patriotism still lives in the United States, we may be able to save it for our children.