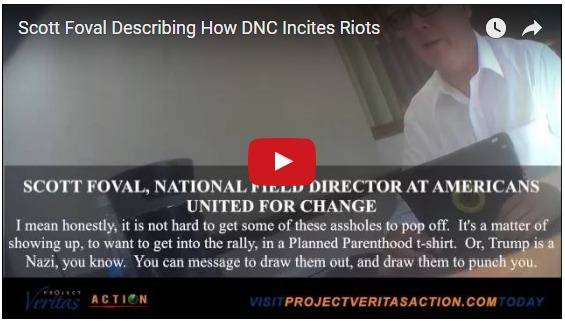 In a campaign that is no stranger to explosive revelations, today’s may be the most damning. That’s saying a lot. Since the mainstream media so far has refused to carry the story, bloggers and Twitter have picked up the video, which can be seen below, and exposed it to the country. As reported by the good folks at Starts at 60:

“An investigation by a conservative group has reportedly found agents working for Hillary Clinton’s presidential campaign paid people to incite violence at Donald Trump rallies. NewsCorp is reporting that the hidden-camera investigation by Project Veritas used undercover journalists to infiltrate political consulting companies with ties to Hillary Clinton. In the 16-minute video, operatives that allegedly have ties to the Democrats are heard describing how they paid agents to stage fake protests against Trump at his rallies.

They apparently aimed to create “anarchy”. Remember the violent protests in Chicago in March which forced Trump to cancel a rally? Well, it turns out the Democrats-associated agents laid claim to that – according to the investigation.

He also claims that Shirley Teeter – the 69-year-old woman with an oxygen tank who said she was punched in the face at a Trump rally in North Carolina last month – was one of his activists. Foval said she was trained to “bird dog”.

Another operative Aaron Black reportedly told the video nobody was “really supposed to know” about him. “So the Chicago protest when they shut all that, that was us,” he said. “It was more him [Bob Creamer] than me, but none of this is supposed to come back to us, because we want it coming from people, we don’t want it to come from the party.”

What’s even more ironic about the investigation’s claims is that if they’re true, they back claims made by Trump after the Chicago rally in March.“It is Clinton and Sanders people who disrupted my rally in Chicago – and then they say I must talk to my people. Phony politicians!” he tweeted.”

Take a look at the video and make your mind up for yourself. The quotes and video tells a story that reveals a scarier and more corrupt Hillary Clinton campaign than ever imagined.