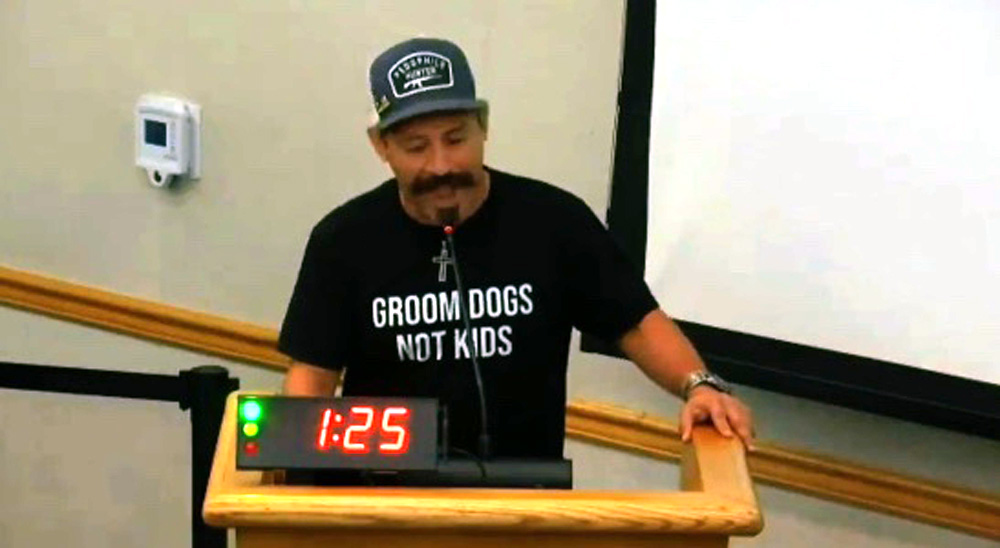 A California man delivered an epic take down of the Conejo Valley Unified School District for forcing little kids to be exposed to woke gender identity politics. And it’s a video you just HAVE to see.

The man, identified as Mario Presents, said he was a representative of a gay group and was wearing a t-shirt that said “Groom dogs not kids,” blasted the school district for the curriculum.

The man opened his video saying, “If I were to teach your kids about my sexuality without your consent, I’d be arrested,” Presents said to the school board. “But when the school district does it, it’s education.”

The man added, “Can you imagine the uproar if schools were evangelizing or baptizing children without parental consent? Isn’t that sort of what you’re doing?”

Tuesday night I attended the Conejo Valley School District to discuss their curriculum.

A concerned father reached out to @againstgrmrs asking for a voice of reason. I have 2 students in the district in my niece and nephew so I answered the call.@GAG_California @ABC7Jory pic.twitter.com/NgHav8bcwn

He also said that affirming a teenager’s gender confusion was “akin to affirming anorexia.”

“Both are body dysmorphic disorders, yet we don’t teach the starving teenagers how to binge and purge or affirm that they are indeed overweight,” he said.

“Parents must be a part of the education process when teaching sexuality to students, and it definitely doesn’t need to happen under the age of ten years old,” he said.

This guy nailed it.