The Useful Idiots and the Democratic Socialists 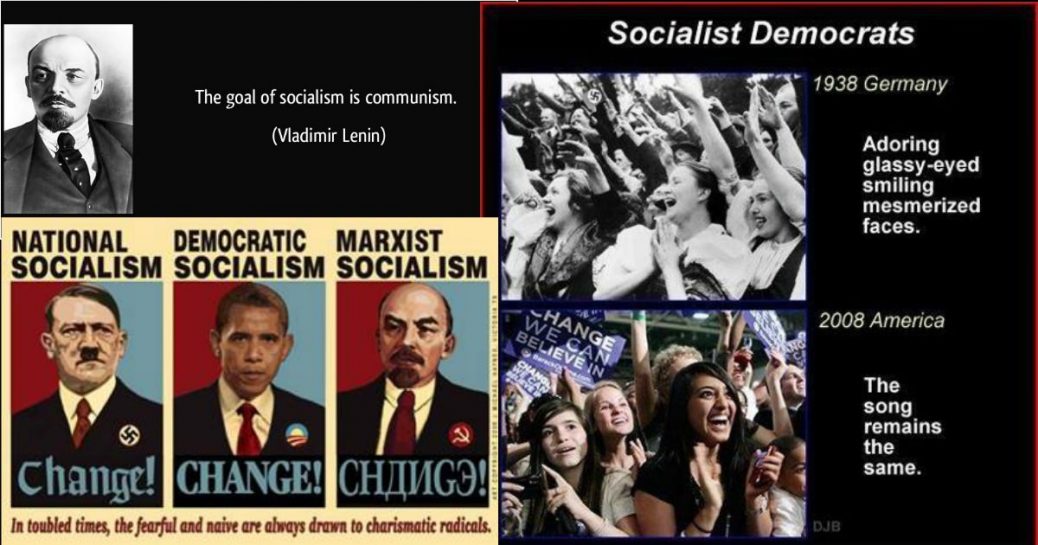 As Americans we tend to look at things from a rather slanted view, that is, from our vantage point as a Constitutional republic.

Now, there’s nothing wrong in being what we are, but the problem comes into play when we try, and have tried, to export our political way of life to other countries.   The United States came into being because the colonists were tired of being considered as something like a pet…you do what the master says regardless of what you might think of the action.  The British king had the notion that he could continue to mistreat the colonies and it would just continue on as it had been.  He was wrong.  Heroism is not a natural occurrence in men, I don’t believe, so heroes are made because of circumstances.   Our heroes were the men who took part in the famous Boston Tea Party, which eventually led to war and our defeating the-then finest military in the world.  So much for history.

Let’s jump to the present and see what we’re facing now.

Do you recall hearing about Agenda 21?  No?  I’m not a bit surprised because that is something that might well be called repugnant to most Americans so it’s pretty much a hush-hush subject.   The problem is that the United Nations, a body that I despise greatly, has this item in the closet, so to speak, and is only waiting for the proper time, if it ever comes, to make sure that the United States becomes subservient to the United Nations.   Here’s a quick rundown on Agenda 21: it wants to “redistribute” people from open rural areas into the city, and the city would become even more crowded then it is now; this document would “gather” people together in a put-together environment, not for their own good, but rather so that the government would be able to control them easier; A-21 would, by virtue of these “sardine-can” cities be able to levy taxes easier and with less resistance from the massed population; one of the goals of this work is to work on the environment by manipulating laws and regulations to improve air quality, which sounds good, but unworkable because every country will not cooperate; the various economies of the world are “uneven” and mass-globalization and “one world order” would level the playing field and probably destroy any country’s freedoms in the process; the UN, of course, would be the governing body and all nation’s governments would be under that banner, if they continued to exist at all; Europe is where the plan has been partially implemented and you can see what’s happening there.   I urge you to find out about Agenda 21, and how you will directly be affected.

A short time back, June 10th be exact, a “major Muslim Imam” made a rash statement.  He said that “In two years America will be a land of Muslims and all Christians will be our slaves.”   When words like that appear and are repeated, as they are, over and over again, it can only mean one thing: there can be no peace between the true believers of Islam and Western civilization.   There’s no way of knowing who is, or isn’t, a true believer so, in my case, none of them get my trust.   The Imam went on to say that Islam provided step-by-step instructions on how to accomplish their goal, which is world domination.  The Islamic idea of “peace” can ONLY be achieved when Islam is the only religion on earth.   I have problems with that thought for a couple of reasons.   The first one is that Islam is not a religion, it’s a cult of fanatics, following the writings of a Seventh Century warlord and pedophile.   Second, in order to attain their peace, the people of the world have three choices: convert, live as a slave paying jizya, or be killed.   The third reason is that they use “taqiyya”, which is lying to infidels, in order to gain their objective, whatever it might be at the moment.   Every little concession that is made to Muslims is a step in the right direction as far as they’re concerned.   All over the world Muslims count on useful idiots to further the cause…and those useful idiots do just that.  Muslims, if they are true believers, cherish death as Westerners cherish life, and that makes it very difficult, if not impossible, to negotiate with them.   You will hear the word “Islamaphobia” tossed about frequently…and that’s BS because it’s not a phobia when they REALLY are trying to kill you!

Ah…you recall I just mentioned useful idiots, right?  Let’s look and see what some of them might be doing to aid the cause.  What cause you ask?   Simple.  Useful idiots see Donald Trump as a threat to their way of life, which is ironic because their way of life is guaranteed by the very things for which Trump stands!   Now then, at the University of Georgia, the home of that famous bulldawg, there is a group of useful idiots, the Young Democratic Socialists, loudly calling for the execution by guillotine of the Republican members of the House of Representatives.   How can this be?   We have laws against making threats like this…don’t we?   Why are we not enforcing them?   Oh, right…it’s free speech protected by the Constitution…another ironic twist, eh?

Parting shot: stand for something, or you’ll fall for anything…always.

Have You Ever Noticed That Justice Never Applies To The Corrupt In Washington D.C.?
September 27th, 2021 Sons of Liberty Media