Learning from Uncle Remus’ about Obamacare 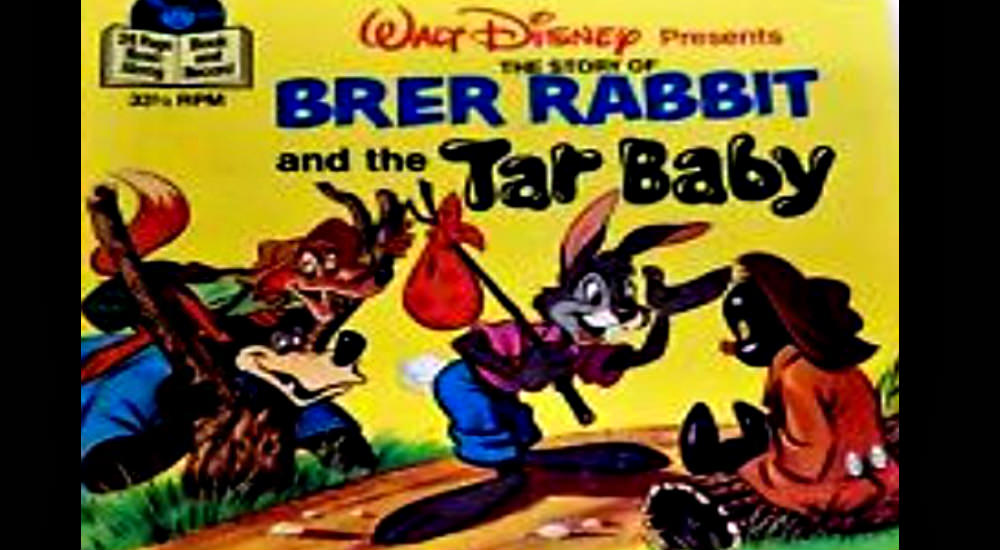 This “Uncle Remus” fable, first appeared in Harpers Weekly in 1880 and nearly a century later was made into a Walt Disney animated film.  In the story “Br’er Fox” wants to capture “Br’er Rabbit” who manages to evade and outwit the fox time and again.  Br’er Fox chances on a lump of sticky tar, puts doll clothing on it to make it look like a creature as all creatures in Fableland wear clothes.  Br’er Rabbit gets stuck and becomes a meal for Br’er Fox and Uncle Remus tells the children listen to him not to get stuck to something silly or of no value, etc.

Have we seen a President Trump defeat on ObamaCare?  I say no. Democrat blind stupidity has stuck them to “tar baby” and the politically correct will come down on me for a “racial inference.” Perhaps I can find some white tar while they find some brains.

The Democrats would have been far wiser to let Mr. Trump get stuck to ObamaCare as trying to unravel that 2,800 page tar baby would have been a much larger job than even Mr. Trump’s legions could manage.

We subscribe to the Limbaugh hypothesis that ObamaCare was designed to fail in order to require government intervention and takeover of the “health care” fifth of our economy.  That trap is still in the package and we expect it to snap in the coming year, but where the “Democratics” are out of power and the Republicans are not going to go to socialized medicine, they are stuck
Our recommendation for Mr. Trump to let the Democrats have their way, get thoroughly stuck celebrating their success, then, “Wump!” Mr. Trump can come to the rescue with a national free market plan just in time for the mid-term elections!  The Russian fraud will have been exposed or died a lingering death not to be saved even by the likes of Jeff “Softballs” Zeleny and the firing of FBI Director James Comey who richly deserves retirement in ignomy, but not the small town in Illinois of the same name.

If this combination of ingredients does not take 30 Democrats out of the House and at least six Senators, there will be no excuses as the Democrats have not been this nutty since Republicans took away all their white sheets, wooden crosses, Kerosene cans and ropes.

Meanwhile back at the “sick care” issue:  There is no reason for it to be one-fifth of our economy as we are not sick one fifth of the time. We are being gouged by a system that begins at the education level.

It is no secret the American Medical Association does everything it can to “keep the club small.”  They require four years of “Pre-Med” college, four years of Medical School, three to eight years of “residency” where young doctors work 30 hours a day eight days a week dreaming of the end result of an annual mean income of $197,000 after 11 to 16 years of “training” none of which included economics or business with the result that doctors are the biggest “pigeons” for stock schillers.

Medical education is ridiculous as there are so many other careers where young people can make more money sooner, faster and not get hooked on drugs.  It is no secret that drug addiction is a serious problem in our physician ranks.

A physician has three things:  Knowledge of human anatomy, a classification system called “Diagnosis,” and a catalog of drugs, the “pharmacopea.”  He assess the patient, draws from a list of pills, potions, nostrums, emoluments and injectibles.  Nonetheless, he is so often wrong doctor errors are the second leading cause of death. It is not we who are sick:  It is medicine.
The human body is self-healing mechanism and if left to it’s own ways will usually cure itself, but life is not forever and statistics say we spend most of our medical money in the last two months of life, drugged out and putting our waiting loved ones through enormous pain as they watch their inheritance go to men in white coats.  No one wants that: Pass on in peace with dignity.  And, we can make a good case for this only being to enrich doctors and hospitals.

California recently passed an “End-of-life” option and the cost of the drugs used went from $30 to $20,000!  If that does not expose the “ethical drug industry” and “Medicine” nothing does, prick me and I will tell more as there is more.

When I was teaching high school Chemistry I had students that were as mature, intelligent and adult as they would ever be.  They could handle a medical school curriculum and if after were apprenticed to a practicing doctor for three years would be as fine physicians as we could ever have.  The quality and dedication is in the person. How dare the leaders of our medicine stoop to avarice.

The people who make our medicines are the “Snake Oil” merchants of our time and the recent “Epipen” scandal pricing $3 worth of Epineprhen at $600, and more, is only one example where hundreds if not thousands can be found.  Corruption is the lyric of the song of medicine.

The FDA has recently approved a study to verify the fact that Turmeric, a common cooking spice, when given with cancer drugs increases the remission rate from 25% to over 90%!  Turmeric has long been known to be an anti-inflammatory and responsible for the fact there is no heart disease in India as it is a common spice in Curry dishes they eat daily.  I ingest Turmeric every day. If the “ethical drug” companies have anything to do with this you will never hear of it as they can’t make any money on it. Strike “ethical.”  Where is our government “of and for the people?” Are they stuck on a tar baby?