Tyranny of the Sexual Deviants 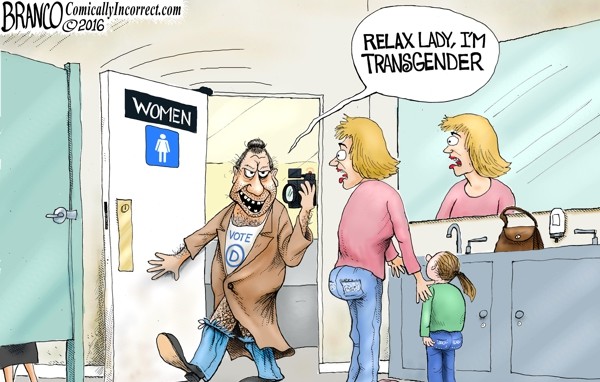 When I first heard about the “transgender community” demanding access to men’s and women’s bathrooms across America, I thought the concept so absurd, so outrageous, that it didn’t stand a chance in you-know-where of being taken seriously. Boy was I wrong!

Just last month in Gloucester County, Virginia, a sadly confused young woman identifying as a young man was granted full access to the boy’s locker room/bathrooms at Gloucester High School. It wasn’t enough that the school was willing to try to accommodate such persons in separate bathroom facilities. No siree, that was discriminatory by not allowing this young woman to use the boy’s bathroom with whom she identifies as her gender “peers”. Rather than get this confused young woman the mental and emotional health care that she obviously needs, the entire community now has to revolve around her mental illness.

Now the department store, Target, has announced that they will not be discriminating against any sexually confused person’s desire to use any bath or dressing room they “identify” with. So when you let your delicate little girl go to the Ladies Room, if there is a beastly man in there “identifying” as a woman there’s not a thing you can do about it. Even though some of these perverts have been caught with a cell phone perched over or under the stall, we all must embrace this insanity or else…

“Totalitarianism is about using force to gain political goals. You can’t get more coercive than forcing the vast majority of people to endorse the utterly bizarre just to accommodate the allegedly hurt feelings of an almost undetectably small percentage of the population.”