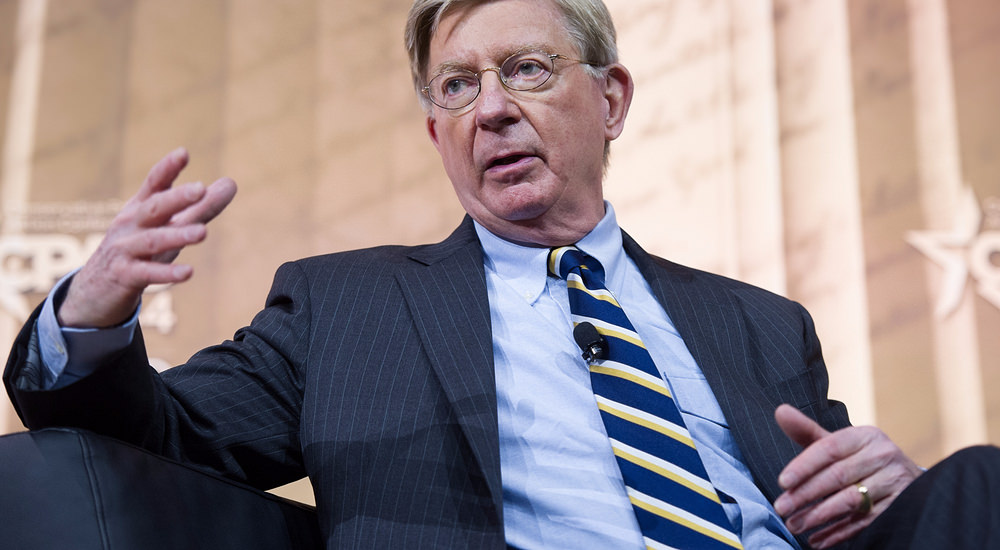 Notice the headline to this story didn’t say conservatives – but I’ll get to that.

A couple of Republican heavyweights have bolted on The Donald. Both George Will and W’s former treasury secretary, Henry “Hank” Paulson have jumped ship. More accurately, neither was ever on the good ship Trump and were most likely never to come aboard anyway, so really it’s not a huge loss.

But they didn’t just leave. They did so in a less than cordial and highly publicized manner. Of course, being public figures, it would be difficult for either of them to do so under the radar.

George Will is now an independent, having no affiliation with either major party. He did so, “After Trump went after the ‘Mexican’ judge from northern Indiana then Paul Ryan endorsed him, I decided that, in fact, this was not my party anymore,” Will said on Fox News Sunday.

I try my best not to defend Trump and his all too frequent hot-headed dopey statements and tweets, but he is at least in the general area code of point regarding Judge Gonzalo Curiel, who is overseeing the Trump University case.

The judge was appointed by Obama in 2012. I need to know nothing more about him to know he is unfit to be an American judge. Maybe Venezuela, but not America. Obama has never and will never nominate a Constitutionalist judge to any bench. Also, any person who can align himself or in any way affiliate himself with the radical pro-Mexican group La-Raza, as Curiel did, is showing us his true colors and is automatically disqualified. But to the blame-America-first democrats, it’s a resume enhancement. Curiel may not be Mexican, and he isn’t, but he sure must have an affinity for them.

I assume Will would have happily endorsed progressives Jeb, Chris Christie, or the Mailman’s son, John Kasich.

I get that George Will is this powerhouse, well respected brainiac, but what has he done for the Originalist movement? Exactly squat, which is why I discounted him years ago. I don’t care how many degrees one has or how erudite one’s commentary is – if he or she cannot read, understand, abide by and advance the very simple concepts of our official rule book, the U.S. Constitution, he or she is useless.

To me, this is George Will.

As for Hank Paulson – he went a step further over the sanity cliff and endorsed Hillary for president. I firmly believe Paulson needs a brain scan – not to find an abnormality, but to see if he has one, as he stated that he hopes Clinton will “bring us together.”

We all know that Hillary

is at least as radical as Obama. How could Paulson ever think that she will, or even has the slightest desire to “bring us together.” Although, she may have designs to bring us all together in one large internment and reeducation camp. Maybe that’s what he means.

Then again, Paulson is former CEO of Goldman Sachs. He is crony corporate Wall Street through and through. Hillary, despite her public demonizing, is all about big money, back room Wall Street payola. If she becomes president, the White House will have a “For Sale” sign on the front lawn the day she is inaugurated. And you can bet there will be a conga line of Paulson’s Wall Street buddies, various Sheikhs and Potentates, waiting there to buy influence. Don’t be surprised if by the end of her presidency, she and Bubba are billionaires.

And as for Paulson’s comment about Trump “hijacking” the Republican Party – it’s absurd on its face. Sorry, but Trump won fair and square. We had our chance to nominate someone better (Ted Cruz), but he lost. Trump didn’t hijack anything. Trump’s angry “populist” message resonated with primary voters because Mr. Paulson – your guy, progressive George W. and you and Will and many others drove the voters to him.

If you inside-the-beltway establishment hacks want to blame anyone for Trump’s rise, look in the mirror.