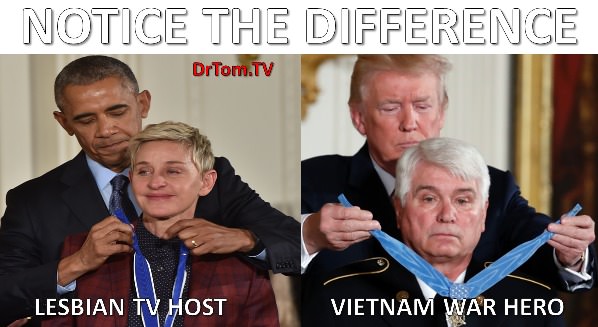 “The Presidential Medal of Freedom is the Nation’s highest civilian honor, presented to individuals who have made especially meritorious contributions to the security or national interests of the United States, to world peace, or to cultural or other significant public or private endeavors.”

Ellen DeGeneres has done NONE of those things, yet Obama gave her the medal. Could it have been because she was a prominent lesbian?

President Trump bestowed the Medal of Honor on Captain Gary Rose, a genuine Viet Nam war hero. He was recognized for his gallantry while serving as a medic with the 5th Special Forces Group during combat operations in Vietnam in September 1970. Rose repeatedly ran into the line of enemy fire to provide medical care and used his body on one occasion to shield a wounded American from harm.

The Medal of Honor is the highest US military decoration, awarded by Congress to a member of the armed forces for gallantry and bravery in combat at the risk of life above and beyond the call of duty. Captain Rose deserved this honor just as much as Ellen did not.

That’s the difference between Democrats and Republicans. Republicans reward real heroes, people who put their lives at risk for love of country and their fellow man. Democrats think a degenerate comedian (who is not funny, by the way) deserves a medal for being a spokesperson for perverted lifestyles. Which party would you rather have in charge of making laws that affect your family?

Unfortunately, these two contrasting medal ceremonies are just a symptom of a much bigger problem in our nation. We honor Evil and dishonor Good. Isaiah 5:20 says, “How terrible it will be for those who call evil good and good evil, who substitute darkness for light and light for darkness, who substitute what is bitter for what is sweet and what is sweet for what is bitter!”

People like Obama honor people like DeGeneres who promote a perverted, unbiblical lifestyle. He used to say he was pro-life (I never believed it) but then his beliefs “evolved” and he started honoring those who butcher babies. He honored deserter Sgt. Bowe Bergdahl in a Rose Garden ceremony, calling him a hero who served the nation with “distinction.” The only thing that made him distinct from his fellow troops was that he betrayed them and his country by deserting his post and walking to a Taliban base. Four good men died and many others were maimed searching for Bergdahl when they initially thought he was lost. Obama also traded five of the worst terrorist leaders that we held in Guantanamo Bay for this traitor. There’s no telling how many hundreds of people were killed when these terrorist generals went back to the fight. And he reversed a 50-year policy of never negotiating with terrorists, which has emboldened other terrorists to kidnap Americans, putting more lives at risk.

Obama and others like him honor Muslims who refuse to denounce Islamic terror. He had homosexuals and Muslims in his cabinet. He honored leaders of the violent Black Lives Matter group (who call for the assassination of police) by inviting them to an official White House forum. They applaud when college campuses are terrorized by radical Leftists who don’t want to allow Conservatives to exercise their First Amendment right of free speech. They rush to support Democrat politicians and Hollywood hacks who call for the assassination of our President. They praise people who show disrespect for our National Anthem, our flag, and our veterans. The people who do these despicable things, led by Obama and cheered on by Hillary call themselves many things: Democrats, Socialists, Communists, Leftists, and Antifa. But they all have this in common: They dishonor that which is good – the things that Christians and Patriots hold dear, the things that make our nation great.

In major contrast is President Donald Trump. Love him or hate him, no one can deny that he is a Patriot. He loves this country, he protects freedom of religion, he honors free market capitalism, and he believes in a limited federal government that is actually responsive to “We, the People.” (Obama and his sycophants take polar opposite positions on all these issues. He honors those things that are honorable. Instead of giving a medal to a pervert, he awarded one to a forgotten hero – a man whose medal was 50 years overdue.

The reason so many Americans love and support Trump is that he honors what they honor. And the interesting thing is that many of them are Democrats who didn’t vote for him, but who share his values. A large number of Democrats don’t really understand what their party stands for. They are good, solid Conservative Americans who happen to be part of families or groups (like unions) that vote Democrat. Unless they really follow politics closely, many of them just assume that the Democrat party shares their values.

Those conservative Democrats don’t know what their own party stands for. They don’t know that the Democrat party platform calls for abortion on demand, homosexual marriage, amnesty for illegal immigrants and much more that does not align with their values. They don’t know that the Democrat elites actually despise them, along with anyone who doesn’t live on one of the coasts or in one of the big corrupt cities run by Democrats (Chicago and New York come to mind). The Democrat leaders refer to anyplace other than those as “flyover country,” because no one who lives in middle America is worth knowing or listening to – they just want their votes. So they fly over them to get to the places that they consider worth visiting – the places where the slick elitists who think they should rule over the rest of America live.

I am firmly convinced that if all Democrats were forced to read the Democrat party platform and spend an hour with people like Nancy Pelosi and Chuck Schumer, 90% of them would immediately change their party affiliation to Republican.