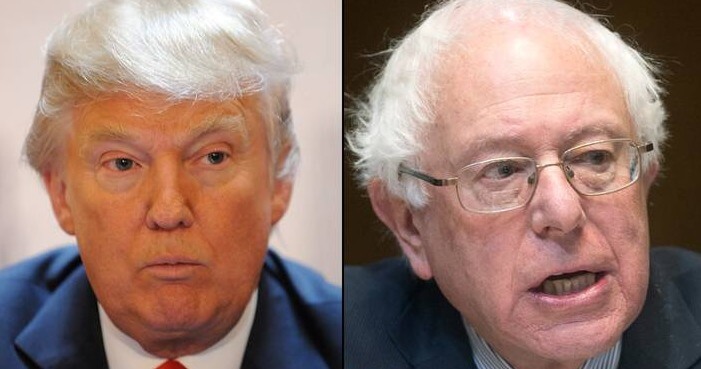 The Movement and the Counter Movement.

No one can honestly deny that there are now two major political movements taking place in America today. Both are strong and one is actually overwhelming.

For the first time in the hundred plus years that America has been a privately owned and controlled entity complete with a privately owned and controlled government overseeing and directing it, there is a movement taking place that could very well strip America’s owners and masters of an entire section of their private government. They could very well lose ownership and control of the executive branch of the federal government. One is a positive movement and the other is a negative movement.

Those movements are the Trump and Sanders movements. And they are BOTH like the tides.

BOTH represent a mental rebellion against the political establishment and what they have been doing with their privately controlled government.

The Trump movement symbolizes the desire of American’s to return this country to being the land of the free where personal legally acquired financial achievement is encouraged and no longer punished. Where the rights of citizens as listed in the original constitution are again protected rights, and hopefully rights that were regulated into almost nonexistence can be restored. Where government bureaucratic over-reach can be curtailed and even reversed. Where America can once again be restored to a sovereign nation status complete with protected borders, and no longer steadily being moved into the establishment’s North America Union division of the New World Order agenda. Where our military is no longer sent to fight in wars that only benefit America’s owners and not America itself. Where our veterans are no longer looked down upon and for the most part shunned by the establishment after their usefulness to America’s owners is over. Where American taxpayer funded assistance programs should be temporary for those physically able to work and only to be given to legal American citizens and not to those who invaded this country. Where the national government no longer forces nationwide acceptance of immoral actions and beliefs. Where education can be returned to the local level and all children again given the chance to actually learn what they need to learn in order to achieve personal success in life, instead of learning to be for the most part ignorant subservient vassals of the state and rely upon the state for everything.

To those who support Trump, he represents their hope of realizing ALL of the aforementioned and even more. Trump has become their last best hope for saving this nation from its well-orchestrated decline and demise.

Trump is neither conservative nor liberal. He cannot be placed into any one specific category. Therefore he never needed to apply any of those phony labels to himself that career politicians need to wear during election cycles in order to fool the voters into voting for them. Instead he is a very well experienced businessman who has built a personal business empire and says that he wants to take the reins of America and straighten out this complete financial mess this country has fallen into.

But phony labels are definitely applied TO him by those who do not want him in control of the executive branch of the federal government. “He’s not conservative” or “He’s not conservative enough” or “He’s a Liberal” or “He’s too liberal” etc. etc. can be heard from many of those who align themselves with the republican side of the political party of America’s owners because they personally want the establishment to continue it’s absolute rule over this nation. Yet these same subservient loyalists of the establishment who claim Trump is not conservative haven’t elected a true conservative to political office in literally generations. But because their masters’ do not want Trump to acquire that office then they too do not want Trump to acquire that office. But the clear majority of those who aligned themselves with the republican side of the owners’ political party most definitely DO want him to acquire that office. Trump has become the only “revolution” the people of this nation will ever possess the collective courage to undertake against their rulers and they definitely DO WANT HIM TO SUCCEED because of that.

In direct opposite to the Trump movement is the Sanders movement. His supporters are those who never learned the value of personal accomplishment. They are those who think they are entitled to all that life has to offer without striving to achieve any of it other than occasionally casting their votes for those whom they think will provide everything for them. They are socialists created by what used to be the public education system before it was converted into being the socialist indoctrination system. For those who go on to college after high school that socialism is embedded into them to even a higher degree. They regard America merely as a territory of the world that any and all who wish to do so can just come here at will. There is no need for immigration laws restricting entrance to this nation and that the American government will take care of all who ask for it. They actually believe that the costs for all of that do not matter because America just keeps printing and borrowing all that is needed to financially sustain all that ask for it. And what the government does not print or borrow can be acquired through massive taxation of those who still work in America. But many of them firmly believe that no one really has to work because government can actually provide all that is needed or wanted. They have no understanding of economics. No understanding of politics. No knowledge of American history. No knowledge of business. They believe that capitalism is the epitome of pure evil. To them the words ‘Free Market’ actually mean everything should be free. They believe that college education should be free and pay no attention to the fact that those college professors who are instilling into them those beliefs in order to make them intellect deprived serfs of the state, are actually getting paid hundreds of thousands of dollars a year to brainwash them. If you ask them if they understand the Cloward-Piven strategy pertaining to socialism, they will tell you no … but will follow that with “what show is he on?”

The Sanders supporters are for the most part the result of American’s not caring enough about their own country and even their own children to stop the deliberate dumbing down of their children in an education system that never should have been allowed to be consolidated under federal control. Now those children are old enough to vote with literally millions more like them being uneducated in America’s public schools. However … they DO all share a positive attribute. They are all vehemently anti Hillary Clinton. They understand that based on her entire political life that has been deeply steeped in criminal activity and complete political incompetence, as well as total self-centeredness, she is not just the LAST PERSON they would ever want to see being given the position of POTUS, but like millions of others they believe she should be in prison and not campaigning for the White House.

Sanders himself is a pure socialist. He has never achieved anything worthwhile in his entire life. With the singular exception of an actual job he held for a very short time and failed at, he has been on the government dole his entire life. He literally hates any and all who did possess the drive and the skill to achieve financial success. As such he feels that most of what is acquired by those who do financially succeed should be taken from them through taxation and distributed to those who like himself do not possess the ability to financially succeed. He resonates totally with his supporters because they are like peas in a pod with the only exception being that Sanders sees himself being placed at the top of the socialist pyramid where he will finally achieve his desire to have more than others. Because in communism, there always has to be those who rule and those who serve.

But the establishment owns and controls both sides of America’s actual one major political party and they have no intention of ever letting Sanders acquire the nomination for the democrat side of their party. THAT was promised to Clinton all the way back in 2008 when they had her step aside and let them place America’s first ever foreign national in the office of POTUS. So 2016 is her year to have the nomination and that is why she will be spared from indictment and prosecution for her latest crimes.

Be that as it may, Sanders still represents an actual movement in this country. A very large movement toward complete socialism. And because his supporters are as vehement as they are about his getting the nomination for the democrat side, there are going to be serious complications for our owners to deal with on the democrat side of their political party after they give the nomination to Clinton. The same as there are going to be very serious complications to deal with on the republican side of their party if they go ahead with planned fraud to deny Trump the nomination when he has clearly won it.

Yes … for the very first time in our history there are two very large political movements occurring simultaneously. And BOTH can be likened to very strong tides.

The Sanders rip tide represents the ambitionless people hoping to pull the country forever back into that sea of despair so all will have equally nothing and need to rely upon the state for everything.