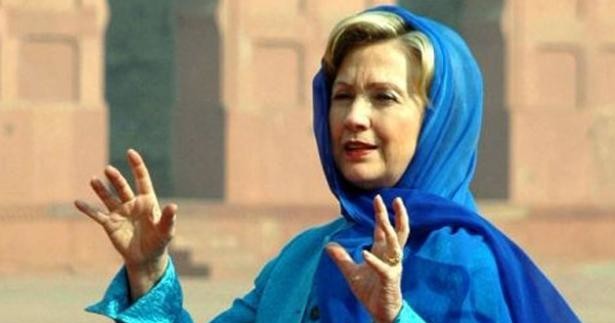 Hillary’s “public” and “private” faces doesn’t just apply to voters and banks, but to ISIS and their Saudi funds for them and Hillary to wage Obama’s War.

In emails obtained by Wikileaks, Hillary has been revealed to be the corrupt, two-faced politician conservatives have always known her to be that liberals deny.  Not only does she have a “public” and “private” stance on policies, but a public and private stand on her foreign policy.  She tells voters she’ll “go after greedy Wall Street banks,” then tells those banks she’s just saying that for votes and that she’ll not only protect them, but fund them taxpayer money so they can donate to her campaign at no cost to themselves.  Now it comes to light that she tells her voters that she’ll fight ISIS and terrorism, but at the same time she is taking money from the Saudis for her campaign and reveals they are funding ISIS!  What a great accomplishment of her tenure as Secretary of State.

When it comes to Islam there is no such thing as “moderate.”  Obama and Hillary keep saying that the Jihad is not Islamic, that terrorists are not Islamic.  They tell it to their ignorant followers who know nothing of Islam or how Muhammad led the first Muslims in holy war against Mecca.  For 14 centuries the Jihad has been the method by which fanatic Moslems have always conquered and enslaved infidels.

The so-called “refugee crisis” in Europe that Obama and Hillary propose to bring to America has been created by their support for the Muslim Brotherhood waging war on governments.  Why are these refugees flooding into the West when their own Muslim brothers are swimming in cash?  After decades of swindling the civilized nations for oil that their technology produced, Arab countries have closed their borders to Syrians fleeing Obama’s war.

In the meantime, Hillary scorns Trump for supporting Putin who’s actually fighting the Jihad.  No doubt Putin would like to influence American elections to get Trump elected to have an ally against Moslem aggression, rather than have Hillary, an Obamaite, continue to aid the jihadis.  Trump stopping Moslem immigration into the United States is the right course and has nothing to do with denial of religious liberties.  Moslems who want to impose Sharia on Americans and override our Constitution have no place in America any more than they have a place in the civilized world.

Obama Has Become the Greatest Conman of All Time