Twitch.TV: Going on Offense Against the Leftist Army of Deceived Millennials 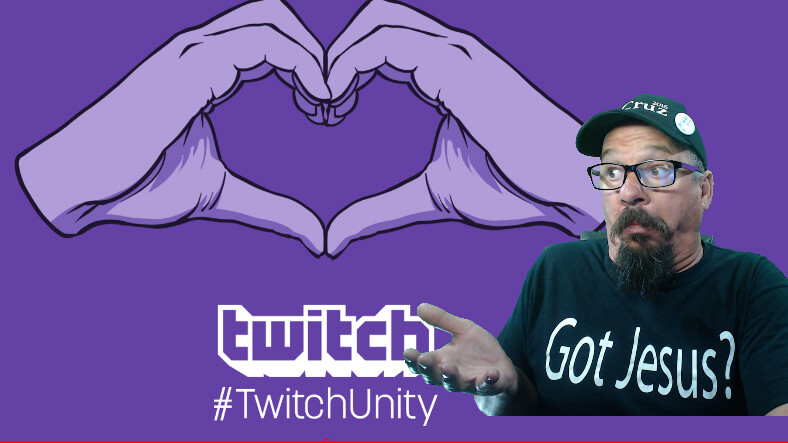 A few years ago my wife and I were on a drive when the subject of preaching came up.

I offhandedly mentioned  that I didn’t feel like I had anything to say. My youth group was gone and most of the people in our Church had been Christians as long or longer than I had. What could I possibly say that could be of value?

She gave me a blank stare and said: “I’m sorry you feel that way.”

That was all she said. We rode on in silence.

You see, circumstances may change, but God never does nor does his plan for our lives.

Go ye therefore, and teach all nations, baptizing them in the name of the Father, and of the Son, and of the Holy Ghost:

For the gifts and calling of God are without repentance.

God began to impress on me that I still had something to say. I revived my Twitter account and began tweeting things I thought witty or profound and before I knew it I was gaining a following.

I began writing longer posts on Facebook and was given an opportunity by Matt Barber to write for BarbWire.com eventually being entrusted with duties as Senior Editor, an honor and a privilege for which I will always be grateful. I am walking among giants of Conservatism and Christianity, like Dr. Alan Keyes, whose boot straps I am not fit to unloose. God orders the steps of righteous men and His divine appointments still astound this punk kid & high-school dropout who grew up on an Illinois farmhouse and the beaches of Eastern Florida.

While I felt that I no longer had anything to say, it was clear that God thought differently.

Recently, I started a show on Twitch.TV  in which I fuse Christian conservatism and news with the outdoors, gun culture, pop culture and video games. I call it God, Guns and Gaming.

Estimates say that 150 million Americans play video games and the average age of a gamer is 35!

Conservative pundits may have a hard time getting a gig speaking to millennials at Berkeley, but once those kids take off their anTifa masks, wash the blood of the “alt-right, white supremacists” off their knuckles and walk back to their dorm rooms, they are turning on their PC’s and resuming their zombie-like fugue state until the next Soros funded agitator texts them the coordinates to the jack-boot rally.

That’s where I come in.

However, peddling my wares on Facebook, I was thrown out of a Twitch.TV group because they didn’t like my Christian Conservative content. Now, this wasn’t the first time I had been proudly thrown out of a Facebook Group or blocked by a heretic “pastor” on Twitter, but this one hurt and I’ll tell you why.

The admins were children. They are the youth group that I no longer have.  They are the fruit of 70 years of liberal progressive indoctrination and a godless society.

A recent poll shows that a majority of Millennials think that Socialism is a good idea.

The DEMONcrats have been in control of business, Academia and entertainment for nearly 70 years and their Orwellian thought control is reaching critical mass.

However, their sins are finding them out.

Recent news has shed new light on the “Secret Society” of the Deep State. The infamous FISA memo has shed light on the fact that the Democrat party has done things to prevent Donald Trump from becoming president that previously only occurred in third world nations or cheesy spy novels.

It was comments of this nature that got me thrown out of the Twitch Facebook group by the millennial, group thinking Admins. Just like Orwell’s 1984, the children ratted me out.

As mad as I got that day, by the time I got home God had turned my anger into something else.

Pity for this lost generation who only knows the tripe that they have been force fed by Marxist professors. A trace of the source documents feeding their ideology leads one to Alinski, Zinn, Stalin, Lenin and Marx.

The passion that I felt rising in me was to redouble my efforts, knowing that the source documents of my ideology are The Bible and The Constitution.

When we are fighting the evil ideologies of Marx, Lenin and Stalin we are indeed battling thoughts and ideas that lead man to sin, coordinated by the demonic powers and principalities spoken of in Scripture.

For though we walk in the flesh, we do not war after the flesh:

(For the weapons of our warfare are not carnal, but mighty through God to the pulling down of strong holds;)

Casting down imaginations, and every high thing that exalteth itself against the knowledge of God, and bringing into captivity every thought to the obedience of Christ; (emphasis mine.)

For we wrestle not against flesh and blood, but against principalities, against powers, against the rulers of the darkness of this world, against spiritual wickedness in high places.

My gratitude goes to the ridiculously red-haired child; dressed like a cartoon character who fancies herself a champion of tolerance and equality, while herself exhibiting anti-Christian bigotry and spewing luciferian heresies.

My zeal has been renewed.

And let us not be weary in well doing: for in due season we shall reap, if we faint not.

Join me in prayer for those who remain plugged in to the liberal progressive Matrix and help continue to offer blood Red-pills of the truth of the Gospel of Jesus Christ to those brave enough to see how deep the rabbit hole of God’s love goes.

It is perfect, it is complete, it is fathomless and it requires a lifetime of obedience, introspection and perseverance unto salvation by broken fleshly vessels, of which I am chief.