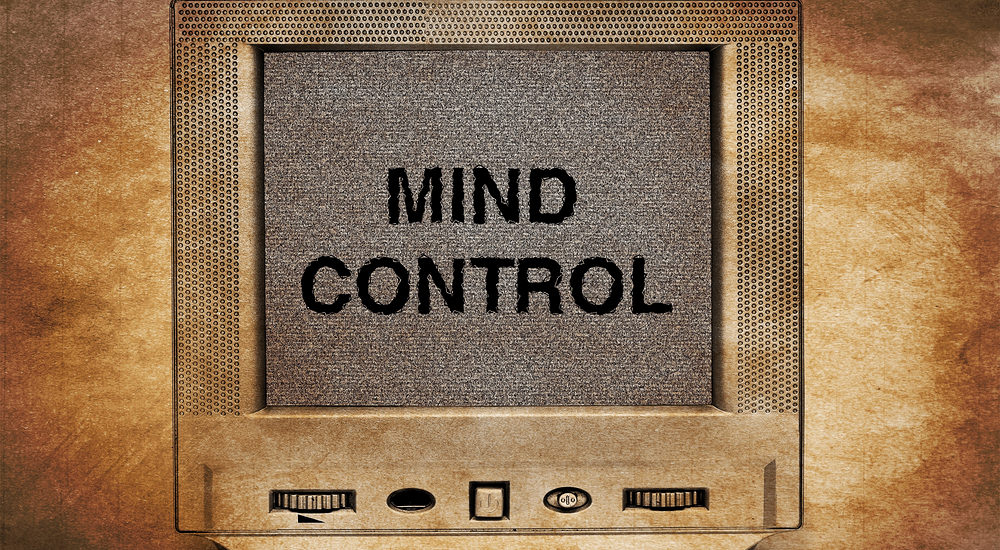 Few subjects present an undisputable window into modern society than the electronic version of reality that is dispensed through television broadcasts. This technology does not require interactive skills or critical thinking acumen. Just watch and fall into a daydream trance. TV is the stealth killer that penetrates 114.7 million American households.  According to Nielsen, the 2012 Universe Estimate (UE), reflect a reduction in the estimated percent of U.S. homes with a television set (TV penetration), which declined to 96.7 percent from 98.9 percent. Should this turn down suggest promise or it is merely a result of internet substitution?

With the proliferation of cable channels and 24 hour programming, the landscape of TV addiction vastly impacts perception and dramatically excludes normal interpersonal relations.  Melissa Melton cites the following in her article, TV: Your Mind. Controlled. “According to last year’s Nielsen report, the average American over the age of two years old watches more than 34 hours of television per week, plus at least three more hours of taped programming. The report also noted that the amount of time we spend watching television increases as we get older.”

This overwhelming intrusion into and over personal time and space are often called entertainment. Broadcasts that bill themselves as news or business shows claim to provide useful information.  Sport coverage makes no pretense of presenting socially significant content. Yet, vast segments of the public are wrapped up in the childish exercise of false hero adoration.

Television’s reporting on politics is miserable by any coherent standard of journalism. The business of television has little to do with an accurate chronicle of events or the meaning of decisions and actions. In order to understand the objectives of the content producers and the basic purpose behind the cultural soothsayers, a review of Mind Control Theories and Techniques used by Mass Media, which is a well documented source that outlines how the mass media really operates, is useful. Examine the specifics and draw your own lessons.

“Mass media is the most powerful tool used by the ruling class to manipulate the masses. It shapes and molds opinions and attitudes and defines what is normal and acceptable. This article looks at the workings of mass media through the theories of its major thinkers, its power structure and the techniques it uses, in order to understand its true role in society.”

The conclusion of this account is a valid summary.

“Lippmann, Bernays and Lasswell have all declared that the public are not fit to decide their own fate, which is the inherent goal of democracy. Instead, they called for a cryptocracy, a hidden government, a ruling class in charge of the “bewildered herd.” As their ideas continue to be applied to society, it is increasingly apparent that an ignorant population is not an obstacle that the rulers must deal with: It is something that is DESIRABLE and, indeed, necessary, to insure total leadership. An ignorant population does not know its rights, does not seek a greater understanding of issues and does not question authorities. It simply follows trends. Popular culture caters to and nurtures ignorance by continually serving up brain-numbing entertainment and spotlighting degenerate celebrities to be idolized. Many people ask me: “Is there a way to stop this?” Yes, there is. STOP BUYING THEIR CRAP AND READ A BOOK.’

Such a sensible solution as turning off the misinformation screen is not an option for most of the typical dullards that think of themselves as normal and informed citizens. Society is populated with marginally functional and enthusiastic compliant serfs. Contentment is judged by actions not merely by sentiment. An unquestioningly and obedient populace, perpetually distracted from serious issues and unaware of comprehending the linkage and ultimate aims behind world events, has always been the goal.

The most profound use of these media techniques usually deal with War & Peace: Media and War. Stanford University publishes this account by Johnnie Manzaria & Jonathon Bruck, Media’s Use of Propaganda to Persuade People’s Attitude, Beliefs and Behaviors.

“Propaganda is so powerful because everyone is susceptible to it. This is true as explained by Robert Cialdini, an expert in influence, because people exist in a rapidly moving and complex world. In order to deal with it, we need shortcuts. We cannot be expected to recognize and analyze all the aspects in each person, event, and situation we encounter in even one day. We do not have the time, energy, or capacity to process the information; and instead we must very often use our stereotypes, our rules of thumb, to classify things according to a few key features and then to respond without thinking when one or another of these trigger feature are present (Cialdini 6). While this makes people highly susceptible to a propagandist who understands persuasion, in general it is the most efficient form of behaving, and in other cases it is simply necessary. Additionally, propaganda includes the reinforcement of societal myths and stereotypes that are so deeply embedded within a culture that it is often difficult to recognize the message as propaganda.”

The attitude that such practices are “most efficient form of behaving, and in other cases it is simply necessary”, is most disturbing and certainly fits the mold of how TV operates.

The examples cited in this case study deal with foreign policy issues. However, the summary on How to Defend Against Propaganda, is worth a look.

“As a result of our increasing sophistication and to build our civilization, we have created and environment so complex, so fast-paced, and information-laden, that we must increasingly deal with it in the fashion of the animals we long ago transcended. Thus, from the case studies on how the media uses propaganda, we can understand that the media does more than presentation facts and information. The media has the ability to exploit persuasive tactics to the specific definition of propaganda: the spreading of ideas, information, or rumor for the purpose of helping or injuring an institution, a cause, or a person.”

Now ponder the disclaimer from this academia project: “We are not advocating that propaganda is wrong; we have tried to show, that overall it is usually helpful to respond to messages mindlessly, and that the truly only way to defend against it is to be more aware of the tactics being used.”

Also referenced in this study is Phil Zimbardo:

Relate this thinking to the television broadcasts and series that occupy the mindless viewing of the general public. While it may be functionally realistic not to expect current event discernment from the mediocre crowd, but what motivates these distraction deprived viewers from absorbing the brainwashing message?

Escape from reality probably is the most adept answer. Nonetheless, the dependency on relinquishing individual responsibility and living under the principle of personal integrity is too difficult for most. The easy way out is to believe the junk feed from the TV screen.

Newspeak has become the dominant culture and TV is the chief vehicle for spreading the lies and deceit. Jack Blood provides a succinct summary in, TV = Mind Control (Why do you think they call it Programming?)

“Once again the system is at work, knowing how easy it is to control the minds of a dumbed down population that has been well trained, and some might say socially engineered, to never question authority, never think outside the box, never seek accountability and never think for itself. Easily manipulated, millions of people are conditioned to believe, from a very early age, that anything emanating from television is sacrosanct. Thus, everything they watch is reality and anything they hear is truth. Anchors and reporters become trusted personalities voicing reticent opinions whose veracity are seldom, if ever, questioned.

The Establishment has perfected its machination of propaganda, creating the realities it wants into society, forming whatever truth that will be of the greatest benefit, not to society, but to itself. Whatever reality it wants to create and disseminate is quickly absorbed by a population eager to feed off the mammary glands of television. The Establishment, the corporate world and government have for years told us how and what to think, how to act, who to obey and where to follow, condemning our minds to obedience, our lives to conformism and silent acquiescence.”

Is it not time to make a clean break from this self-induced imprisonment of images and sounds that spills out of the television machine?