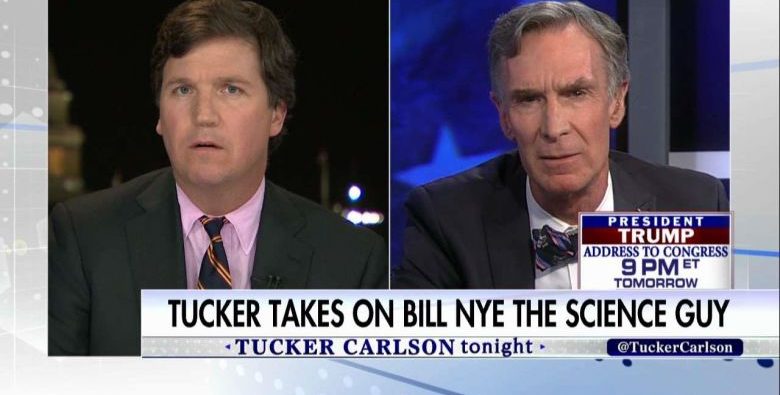 In his Monday, February 27, 2017 broadcast Tucker Carlson had “Bill Nye the Science Guy” on as a guest. Bill once had a “Mr. Wizard” style science show doing all kinds of “chemistry set” demonstration “experiments,” which are not really experiments, but teaching tools. Having taught high school chemistry for eight years I observed that Bill’s knowledge was spotty and his demos sloppy. When I learned that Bill’s degree is in electrical engineering some of the questions I had were answered.

Engineering uses science, but it is not science. The focus is on what works and what does not. Their hard focus tends to be on physical limits so that stuff they design and build works and is safe. Their reference books tell them how much current they can pass down a quarter inch diameter copper wire and not cause a fire, for example. Engineers are often in awe of “pure science” guys and give them great respect.

Bill has recently said climate change skeptics suffer from “cognitive dissonance,” which prevents them from accepting how man-made global warming affects their lives. On “Tucker Carlson Tonight,” Nye argued many people prefer to bury their heads in the sand instead of accepting evidence that man is causing global warming.” Bill said, “The evidence for climate change is overwhelming, so we’re looking for an explanation for why you guys are having so much trouble with it.”

Tucker asked Bill to what degree man was responsible for current climate change, I suspect, to set him up for a “prove it” challenge. Bill was wary and did verbal pirouettes worthy of a bullfighter. Bill is clever, but he did manage to say human activity is making climate change occur at a “catastrophically fast” rate. “So much of this you don’t know!” Tucker countered. “You pretend that you know, but you don’t know. And you bully people who ask you questions.”

The exchange continued through several iterations much like the first stage of a bullfight with many large “Veronica” cape passes and no real hits on either side, dribbling off to a quiet ending without a kill, but the one real point made by Tucker was that skeptics, not climate change activists, are the ones who are open-minded. This was a hit on Nye who appears to have some appreciation for the situation philosophically so he performed a threatening “quite” exit saying, “Carry on, Mr. Carlson,” Nye ominously said to conclude the interview. “I’m sure we will cross paths again.”

I have sent materials to Bill Nye and his publicity agent, but not received any kind of reply. All were respectful, informative, open-ended, demo-experiments that I thought he should understand, but now wonder since learning his education is not in the basic sciences since high school, if then. he could have gotten through with only Freshman General Science, no Chemistry or Physics, but I write for “civilians” explaining everything and only assuming an understanding of basic math.

Bill Nye is not a stupid man, but he may be ignorant of basic physical science. However, he knows the money side of this issue and he is prototypical. Bill is an example of how fast this issue can flip when the money is on the other side of Tucker vs Nye.