Tucker Carlson is the next Rush Limbaugh 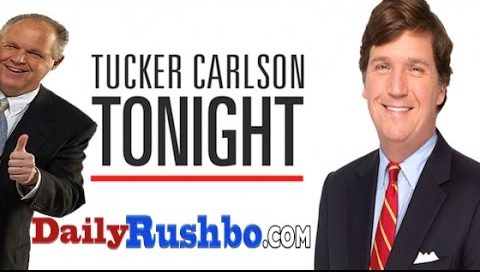 The young replacement for FOX’s number one Bill O’Reilly is already proving to be a far greater debater and advocate for American values.

Talk about insightful, cutting logic, and sharp retorts; Tucker Carlson sees through every liberal effort to lie, obfuscate, and dissemble from the truth as they attempt to dodge questions and answer something else only to be called out by Tucker’s unerring understanding.  Rush Limbaugh couldn’t do better against the leftists that Tucker has on his show to as they try to make their case and he rips their arguments out by the roots.  Carlson throws down in the center ring to shine the light of truth on them with such intensity that they are left dumbfounded before the veracity of his exposure of liberalism.

Watch these two interviews and you will see a master debater in action. 😀 😉

This man excuses the actions of jihadis by claiming they are not following the teachings of Muhammad when those teachings are clearly spelled out in the Koran and Hadith.  These are the only books these people read, the books they memorize and worship, the books their Imams instruct them in how to interpret, and whose tenets they are brainwashed five times a day to follow without question.  At the end Mustafa Tameer insults the world by blaming the victims of Islamic terror by declaring that they are xenophobic racists creating a hostile environment to keep the Moslem man down.  After making that declaration he then tells Tucker, who rightly interprets his statement as blaming the victims, that Carlson is the one making that statement.  Any person can easily be misled and distracted by such quibbling and evasion and fail to follow what the speaker is actually saying, but Tucker Carlson cuts right through to the truth behind his forked tongue.  Listening to Tameer get backed into a corner is reminiscent of Obama and his great talent to read well from a teleprompter, but when speaking directly must hem and haw as he searches for the right words to use so that his true meaning and intentions are not exposed – which they were on many such occasions when confronted by intelligent men like Carlson for which he was castigated (e.g. Joe the Plumber exposed Obama’s Communist socialism.)

Tucker takes down a global warming alarmist over Paris Treaty

Watch as Miami Beach Mayor Phillip Levine dodges the question of why America should abide by the Paris Treaty to reduce CO2 emissions while China and India multiply theirs!  And then he puts forth the ultimate liberal argument,

“What about for the slight chance, Tucker, all the world’s scientists and some of these great minds, let’s just say maybe they’re right.  If they are, maybe it’s a good idea if we do something about it.”

ALL the world’s scientists and great minds DO NOT say leftist’s idea that global warming is man-made and that man can control the climate of the planet.  Only a very few leftist advocates who get taxpayer money from government go along with this.  What about the chance that all the world’s Christian clergy are right and, even though no one can prove that God exists, maybe it’s a good idea if you go to church, confess your sins, and give your tithe just in case He does exist?  No scientist can prove that the sea levels will rise tens of feet in the future to flood the coasts.  No more than they can prove that CO2 is causing global warming through any scientific experiment except computer models that they program to produce such results.  The seas have not risen half an inch in the last hundred years, but they point at flooding in Miami from yearly King Tides as proof that the seas have risen many feet.

Leftist leaders believe they can distract the masses from the depredations of Islam by declaring that the planet is going to die from global warming.  Only an utter fool can be made to believe that the man with the knife is less dangerous than the drops of rain landing on his head.  America needs an education before they are consumed by the socialist tyrants of globalism.