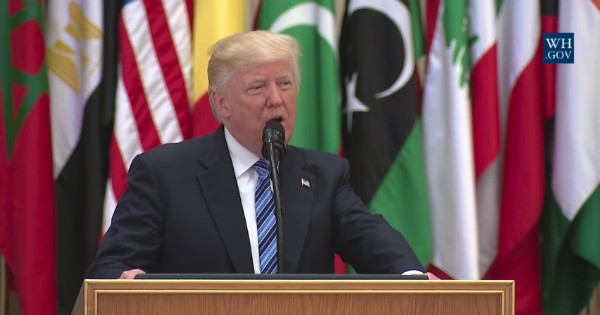 Today, President Trump had what a majority of Americans would consider to be a successful foreign policy day. His tone when speaking about terrorism to the core of the Muslim world in the Middle East was generally approved; the left liked that he didn’t go off the rails and the right witnessed a breath of fresh air after eight years of failure to even acknowledge the problem.

Not everyone was excited by his message, but conservatives should be able to agree that he sounded exponentially better than President Obama. He didn’t call it “radical Islamic terrorism” but he wasn’t making excuses for them, either. Most importantly, he urged Muslim countries themselves to take the lead on expelling and extinguishing the threat; there were no Neocon or Establishment hawk leanings towards police action by America.

Now, his and the world’s attentions turn to Israel where he has the greatest foreign policy opportunity as well as the biggest potential letdown for those of us who consider Israel to be our most important strategic ally. His trip to the Jewish state will set in motion his agenda in the Middle East. After success in Saudi Arabia, any failure from a diplomatic perspective will be magnified. There are already people on the right attacking his implicit support for Saudi Arabia’s most heinous activities. If he doesn’t follow that up with an equally strong (or stronger) level of support for Israel, the comparisons to Obama’s policies on the Middle East will grow louder.

Will he move the U.S. Embassy to Jerusalem? Preliminary reports tell us they won’t, but this is President Trump so you never know what will happen until it does.

Can he avoid public conflict over allegedly revealing sensitive Israeli intelligence to the Russians? We can assume any dismay from the Israelis or reassurances from the President will happen behind closed doors, so this is likely a non-topic during this trip as far as the public is concerned.

Pre-1967 borders have suddenly entered the equation since the White House released a video showing Israel without the “occupied” territories as part of their lands. This may be played off as an intern’s mistake or it may become an issue.

The BDS movement will be discussed. It’s an issue that should bring unification between the administration and Israeli leaders, particularly as he will undoubtedly point out how the movement hurts Muslims as much or more than it hurts Jews.

Lastly, will there be any talks of a two-state solution? If it happens during the Israel trip, it will push this portion of his agenda to the forefront and we can expect repercussions from many on the American right as well as an adversarial situation in Israel itself. This is unlikely, but again, it’s Trump so you never know.

If President Trump makes it out of Saudi Arabia and Israel with both allies feeling good about their relationship with America, Trump will be set up for success. If Israel turns south on the President, this could be the start of a foreign policy disaster that will likely spiral throughout his term(s).