Trump’s Best Response to Charge of Racism – ‘Go F*** Yourselves!’ 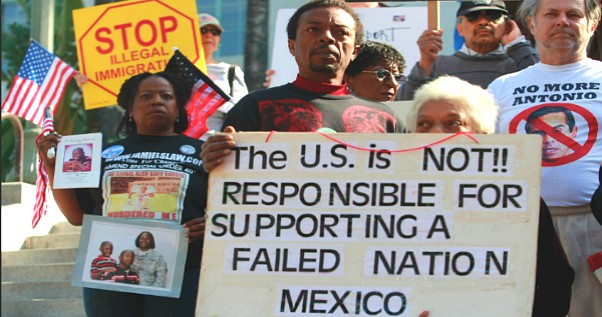 Trump honors MLK, reduces black unemployment to record lows, and the liberal Democrat media narrative is “Trump is a racist.”  This is called Big Lie propaganda – create a flood of a single narrative to dupe the ignorant into believing a lie.  Following Trump’s honoring Martin Luther King, Jr. more highly than any previous president, plus revitalizing the economy to the point that black unemployment is at its lowest point in history are truths that liberal Democrats cannot be allowed to be known.  So they invent this charge that Trump is the head of the KKK and inundate their mindless lemmings with the Big Lie.

Liberal media are flooding the zone with charges that Trump is a racist all based on a supposed remark that he said countries like Haiti are “sh*tholes.”  So what if he did?  Have you been to Haiti?  Seen pictures of it?  It IS a sh*thole!  As far as being “unpresidential,” LOL!  You think Obama was being “presidential” when he said “the Cambridge police acted stupidly” or called the TEA Party members “Teabaggers?”  Do you know how incredibly vulgar that term is?  Try looking it up on gamer sites and learn something of how lowly Obama spoke.  But liberals will quickly excuse Obama’s vulgarity as “justified” just as Islamic jihadis excuse their murders as “justified” defense of slanders against Islam when all the people speak of the evils of Islam is truth.

ALL countries that have been living under totalitarian socialist rule for decades are the toilets of the world.  North Korea, Cuba, Haiti, and countries like them are the living examples of absolute, unfettered socialism.  Uneducated liberals think Europe is socialist because they don’t understand that Europe became wealthy after WWII with America’s help, but have been thoroughly corrupted.  It takes time for socialists to steal all of other people’s money.  What is happening in Europe today with their flood of Moslem immigrants raping, rioting, and conducting terror attacks, the decline of their economies, and the deterioration of their cultures are all the result of their populations being corrupted to embrace socialism.

It’s not just the countries they run.  It’s every city in America that has been run by leftist Democrats.  Detroit, Michigan used to be the richest city in the country.  Now it’s a Democrat toilet.  Washington, D.C. used to be the seat of government and produces nothing except politicians.  Now it’s the wealthiest city in the country thanks to Obama stealing wealth from all other rich cities and hoarding it in the Democrat Party.  One fact comes out of this and it is not that Trump is a racist, but that Democrats, the party of slavery, organized crime, and union thuggery is the heart and soul of greed, envy, and lies.  Trump is being smeared as racist after he honored MLK, Jr. and lowering black unemployment to obscure these truths.  The leftist propaganda machine is attempting to write the Big Lie by concealing the truth and promoting a false narrative to overwhelm the brainless liberals that listen to their media propaganda.  There is only one viable response that President Trump can make to these charges that will not be likewise be characterized by the Left with more smear as either lying or denying the truth by “protesting too much.”  That response is –

These schoolyard bully’s slanders and their smears that the righteous tell only lies cannot be reasoned with, so there is no point in arguing with them.  Just tell the world that they are low-life scum spreading lies.  When even half of Republicans stupidly fall for this tactic of vilifying Trump over the truth there is no intelligent response to make against the lies of the Left.  Democrats enslaved Africans, allow drugs to flow into the U.S. from Mexico, import cheap labor to be welfare voter slaves, and encourage the idolizing of the most corrupt and immoral people in the country as icons.  The Left offers nothing but their dysfunctional culture promoting corruption and elevating themselves as the elites.

No one has to explain to Democrats that being against people stealing across the border to illegally take jobs and benefits from taxpayers is not racism, but righteously upholding the law.  They know full well that they are promoting lies that illegal immigrants make America better and more productive.  All they do is add to the burden of the taxpayer to give Democrats an excuse to raise taxes to “help” the poor babies when all they do is stuff their own pockets.  America’s immigration system is the largest in the world.  Refusing to allow the worst people in the world to come into America is not a crime against compassion.  It’s a crime against Democrat’s lawlessness in their minds.  Democrats want foreigners to overwhelm the masses who are becoming educated to Democrat lies.