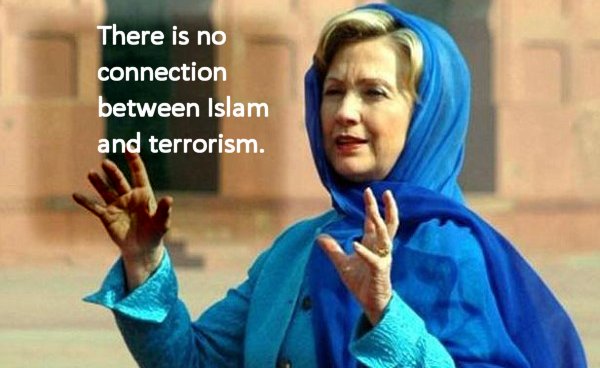 Like a Mafia boss or a jihadi Imam, Hillary Clinton calls on liberal lemmings to terrorize Republicans until they submit to Democrat rule.  The conflict between Republicans and Democrats is no longer about ideas.  Obama and Trump have proven beyond doubt that Democrat ideas are crap and Republican ideas are brilliant.  Democrats are now simply engaged in an effort to take power back by force and terrorism.

I will be voting for Patriots against the Nazis.  If you find that confusing you are probably a liberal Democrat who thinks Republican patriots are the Nazis.   This is the pathological behavior of liberal who is part of the Nazi fascist commie movement that Democrats have always been.  The left has disguised themselves for decades acting surreptitiously, but now they are out in the open and you have no excuse for being their dupes.

Liberals do what they are told from day to day like lemmings.  One day Comey is a hero and the next a villain and the next a martyr.  The ease of duplicity with which the liberal mind works is a sickness that America cannot afford to give power.  When people can so delude themselves to believe that Jesus was a Nazi and that Satan is a redeemer they are truly lost in the darkness.

“You don’t hand matches to an arsonist, and you don’t give power to an angry leftwing mob.” – President Trump

Democrats say Republicans won’t go out to vote because they are happy, and happiness doesn’t motivate as anger does and they are the angry ones.  There are two faces to anger; irrational rage and righteous wrath.  Republicans are not happy with the way Democrats are behaving.  They are rightfully angry at the feral angry mob that is attacking them, destroying their property for voicing their support for Trump, murdering police, and assaulting their representatives.  This is not the unreasoned hatred of the left.  This is righteous wrath at the wickedness of leftism.

Democrats in the media keep producing these “polls” that say Democrats are going to take every seat in Congress.  Like 2016, these polls all lie and are only meant to influence the ignorant into thinking that everyone wants Democrats and no one wants Republicans.  They are meant to dupe and inspire Democrats while disheartening Republicans.  The same people say that Republicans should not celebrate Trump’s victories and achievements lest they incite Democrats.  They likewise lauded Obama when he trotted out the Greek god columns for his inauguration.  The thing to do in the face of these polls and proposals is to tell them to shove it and shout with joy at President Trump!

Democrats reject Americanism because it is not their values, so they smear and slander anyone who is not part of their tribe.  In the liberal world they are right to destroy the righteous.  America is not a place for all to prosper.  It is only for them.  If Republicans lived by the same standard, then those who worship Satan would be destroyed.  The nation would devolve into both sides saying they represent God and the other represents the Devil and vow to destroy the other.  It would be like being Islamic Sunni vs. Shia.  But Christians don’t censor the lives of sinners because we know that we are all sinners, and none have the hope of reaching the light if they are destroyed for their sins.

We must understand what we’re up against

Democrat hate and vitriol against Trump and Republicans is manifest in their 100% negative reporting of everything they say and do.  If Trump walks on water, they report that Trump can’t swim.  If he kisses a baby, they call him a pedophile.  If he saved the lives of a thousand people single-handed they would damn him for contributing to overpopulation.  There is nothing good in the souls of leftists.  There is only hate, envy, greed, malice, and revenge.

That hatred and lowly character is evidenced by Obama’s top cop, Eric Holder, who sold weapons to Mexican drug cartels.  He is now saying that Democrats should no longer follow Michelle Obama’s, ‘If they go low, we go high,’ mentality (which is funny as high to them is coming up to the gutter).  Now it’s, “If they go low we kick them.”  And Democrats idea of Republicans “going low” is when we tell them ‘no.’  These people are worse than unruly children.  They are violent thugs who say no to the law.  They say no to civilization.  A society either moves upward toward civilized behavior or downward into barbarism, and Democrats are choosing to move America deeper and deeper into savagery.  It’s not right.  It’s just their nature.

Lock him up – Nazis vs. Christians; Democrats Make the Nation INSANE!

If Democrat Voters were Righteous they would be Republicans

The Kavanaugh Effect – All of my Heroes are Christian Soldiers