Trump Proudly Drops the “Mother of All Bombs” 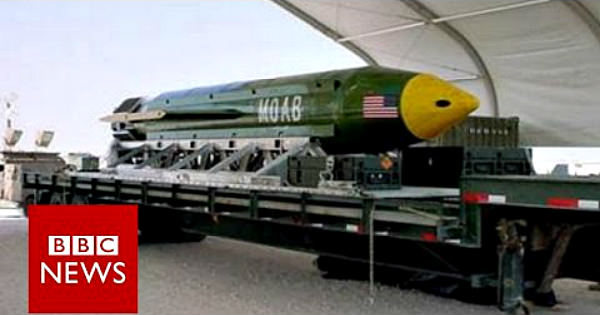 On Thursday the US Military delivered a new first in world military history. They dropped the “Mother of All Bombs” on a battlefield for the first time ever.

The MOAB as it has become known is a 21,000 pound bomb and is also the most powerful non-nuclear bomb every built.

For a taste of what the MOAB is all about… see this video:

When asked about the decision to drop the MOAB on ISIS in Afghanistan, President Trump responded that his administration had given the military “total authorization” to proceed as necessary against radical terrorism and that is “why they’ve [the military] been so successful lately.”

When asked if he gave explicit authorization to drop the MOAB, President Trump replied:

“Everyone knows exactly what happened. So, and, what I do is I authorize my military. We have the greatest military in the world, and they have done the job, as usual.

During the daily White House press briefing press secretary Sean Spicer had more to say about the bombing in Afghanistan.