Trump Promises to Pull Us Out of UN Small Arms Treaty! 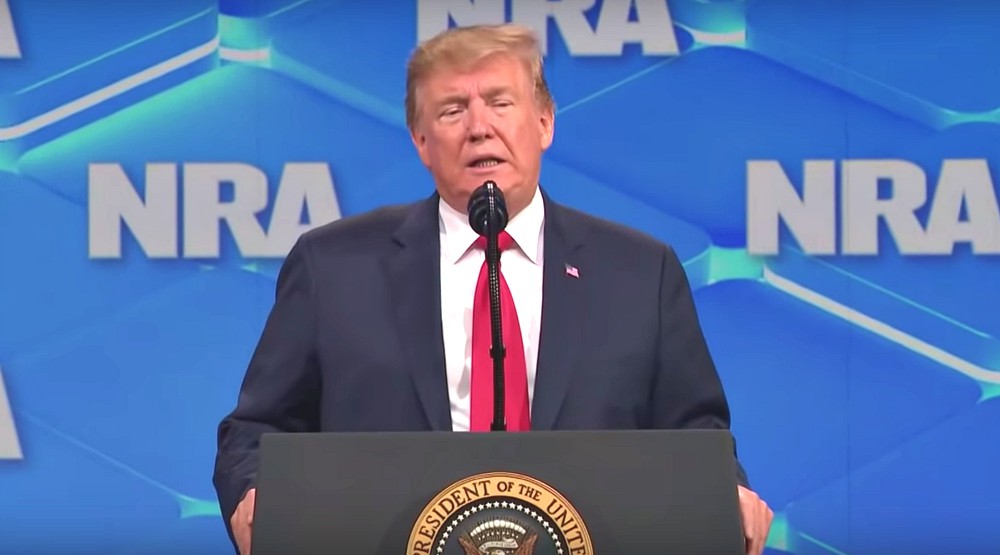 Earlier this week, President Trump spoke to the gathered members of the NRA at their annual conference in Indianapolis, Indiana.

He had a few very important things to say.

First, he took a little time to first address the fact that the Democrats collusion delusion, had been proven to be a fraud.

Here’s what he had to say on that front:

America’s future has never been brighter. And yet Democrats have never been angrier, especially now that their collusion delusion has been exposed to the world as a complete and total fraud.

It’s been the greatest political hoax ever in our country. Instead of working with us to rebuild our infrastructure, lower drug prices–which, by the way, this year for the first time in 50 years drug prices went down, they’re going to go down a lot lower. And instead of working with us to fix our trade deals, which I’m doing without ’em, and continue creating millions and millions of new jobs, which we’re doing at a level that people have not seen before, that people don’t even believe– Democrats are obsessed with hoaxes, delusions, and witch hunts. That’s what they’re obsessed with. That’s what they want to do. And we can play the game just as well or better than they do.

I was saying to Melania, our great First Lady–whose birthday it is today. Happy birthday, Melania. I remember standing two and a half years ago in the same hallway where Abraham Lincoln and so many others have stood, my first night in the White House. And I said to Melania, I said, “This is incredible.” And four years seems so long away. And now here we are. We’re getting ready to start up the campaign again; start up the campaign again.

I never want to do anything with MAGA, because MAGA country and MAGA–Make American Great Again has been great. But we’ve really made it great. We’ve made it great. We’ve brought it back. And we’re thinking about the slogan, Keep America Great, because you have socialists and far left Democrats that want to destroy everything that we’ve done.

Your 401(k)s are going through the roof. Your stock market since the election has hit a record high. Almost a hundred different records I’ve broken, a record high. But everyone’s like a genius now. They buy stock and they’re all up. Everybody’s benefiting and jobs are benefiting.

We gave you the largest tax cut in the history of our country, the biggest ever. And we got ANWR approved. And we got the individual mandate, the absolute worst part of Obama Care, eliminated. Now we’re going for the rest.

In yet another bold move that proves his steadfast leadership, President Donald Trump has announced that he will end the USA’s participation in the UN Small Arms Treaty.

“In the last administration, President Obama signed the UN arms trade Treaty, and in his waning days in office, he sent the treaty to the Senate to begin the ratification process. This treaty threatened your — and you know exactly what’s going on here — your rights. And your constitutional and international rules and restrictions and regulations. Under my administration, we will never surrender American sovereignty to anyone.

We will never allow foreign bureaucrats to trample on your second amendment freedom. And that is why my administration will never ratify the UN arms trade Treaty. I hope you’re happy.

I’m impressed. I didn’t think too many of you would really know what it is. You notice? A big, big factor. But I see a couple of very happy faces from the NRA over there. And I am officially announcing today that the United States will be revoking the effect of America’s signature from this badly misguided treatment. We are taking our signature back.

The United Nations will soon receive a formal notice that America is rejecting this treaty.

As part of this decision, I will sign right now in front of a lot of witnesses, a lot–

–Got a lot of witnesses, a message to asking the Senate to discontinue the treaty ratification process and to return the now rejected the treaty right back to me in the Oval Office, where I will dispose of it.

Here’s the full video of his speech to the NRA: