Trump in Poland Proved He Will Defend Western Civilization 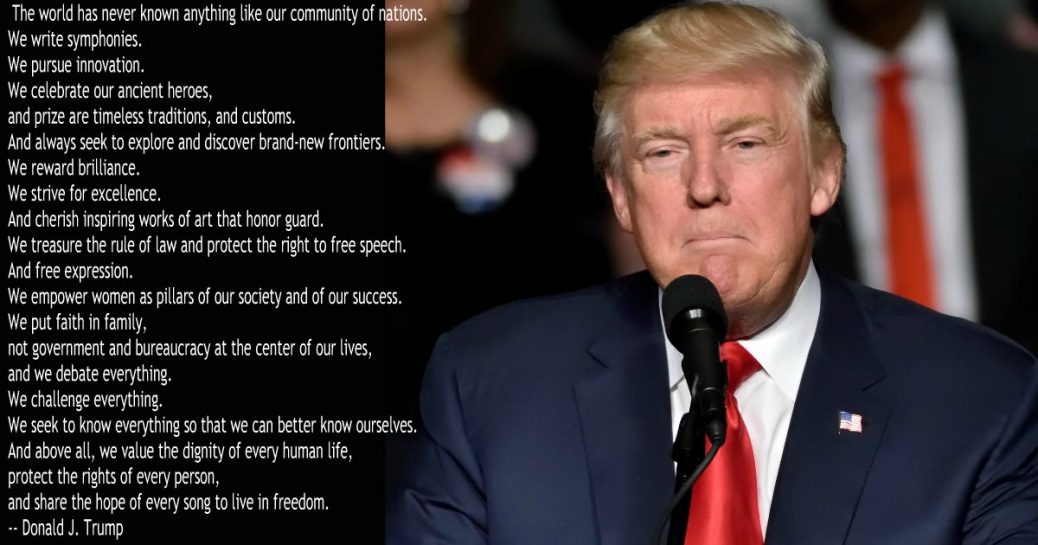 The most important takeaway from President Trump’s trip to Poland is that he has willingly taken on the role of defender of Western Values and Culture.

This theme of his Warsaw, Poland speech has divided the media and the American political class… of course.

On the left and in the media – they saw Trump’s speech as some kind of xenophobic tirade against the non-Christian world.

On the right (and in more nonpartisan circles) they saw the speech for what it was – and articulation of the differences between Western civilization and the non-West.

In his speech Trump defended our most deeply held shared values: free speech, religious liberty, free press, free association, free trade, and the right for each nation to act in their own best interests.

The world has never known anything like our community of nations. We write symphonies. We pursue innovation. We celebrate our ancient heroes, and prize are timeless traditions, and customs. And always seek to explore and discover brand-new frontiers. We reward brilliance. We strive for excellence. And cherish inspiring works of art that honor guard. We treasure the rule of law and protect the right to free speech. And free expression.

We empower women as pillars of our society and of our success. We put faith in family, not government and bureaucracy at the center of our lives, and we debate everything. We challenge everything. We seek to know everything so that we can better know ourselves.

And above all, we value the dignity of every human life, protect the rights of every person, and share the hope of every song to live in freedom.

These things were hardly controversial just a decade ago, but in today’s liberal and chaotic milieu they’ve somehow become shockingly divisive.

CNN’s David Gergen who has worked in both Democrat and Republican White House’s and has been a critic of the Trump administration showered Trump with praise for his Europe visit:

“We are different from other societies. We speak freely, we protect the individual. We do write symphonies. We have no reason to be ashamed. We’ve got a lot of reasons, countless reasons to be proud. And not just of our wealth, the civilization is not merely the sum of our country’s GDP, it’s a constellation.

Values, and norms, and traditions, heroes, and villains, and yes, even religious beliefs are the most successful and benevolent in human history. But it still vulnerable. All civilizations are vulnerable. Rome looked invincible at one point, too. It turned out not to be. So, it’s worth remembering the basics. Western civilization is our birthright. It makes all good things possible. Undefended, it collapses.

And so, we’ve got to fight to preserve it. Not just with air strikes, but with a vigorous defense of our common values. Nothing matters more than that. President Trump has his flaws, but to his everlasting credit he is willing to say all of that out loud. And that’s worth something. Maybe a lot.”

Nationalist commentariat and former presidential candidate Pat Buchanan had a similar message when appearing on conservative Laura Ingraham’s radio show on Friday. During their discussion Buchanan argued that Trump’s speech was really aimed at the forces of the far left that have sought to undermine the nations of the West, and are still fighting to destroy our culture and our traditions. In fact, he argued that Trump’s real message in Warsaw was that the West is not just facing the dangers of radical Islam, but that the bigger danger comes from the forces of cultural marxism and transnationalism.

Pat Buchanan: Poland is the outstanding example. It lived for five years under Nazi occupation and all the atrocities and murders — the Warsaw Uprising, the Warsaw ghetto, all the death camps were on Polish soil put there by the Nazis. And then for the next 45 years beginning with Joseph Stalin until ’53 it was under the most brutalitarian communist dictatorships which was utterly at war with Christianity.

All of these countries in Eastern Europe that were under that boot for almost half a century they rose up to be countries again based on their views and values. And now are they still holding on to this? But his point is exceedingly well taken. This is Solzhenitsyn. You know, God is not dead. Without God, what do you got? Who is the author of Western Civilization? What are the ideas that created the West. And what it is is there is a certain war going on internally if you will, cultural Marxism or secular liberalism, call it what you want, which is rooted in the highest good as simply being democracy, etcetera, etcetera. And so Trump touched on that and then he went on to the idea that you are being invaded and can you stop the invasion from the South? And it’s a very real question whether Europe has the will and the belief and the conviction to stop the invasion or whether it even cares.

Laura Ingraham: The criticism that Donald Trump is receiving from the media goes like this: ‘Trump is not standing up, they said yesterday, for American values. In fact, what he’s doing is he’s giving comfort to the Polish president who has been cracking down on media outlets in his own country because he’s taking on CNN, he’s taking on NBC, and he’s not standing up for American values.’

I thought that speech was all about American values. I thought that was about freedom, about liberty, about life, pro-life. It was about patriotism and sovereignty and nation-states. I mean, I don’t know how much more pro-American it could get.

Pat Buchanan: Well, folks talk about the battle here that Trump touched on and he came down on the side of basically American being a unique, great different country and we want to preserve what it is and what it believes against if you will the Merkel transnationalism in Germany and we’re all in this together transnational approach. And Trump’s talking about America and its unique character and it’s a religious character if you will.

President Trump’s Warsaw speech was a wakeup call for the West – the forces of the far-left are attempting to destroy us. Either we wake up and defend ourselves, or our way of life will disappear. Thankfully, nations like Poland, Hungary, Czechia, Slovakia, Estonia, Latvia, Lithuania, and the United States can see the dangers of cultural marxism, identity politics, and the far left and many of our citizens still have the strength and the will to fight back.

So we will fight.