Trump Leading Us to Armageddon? 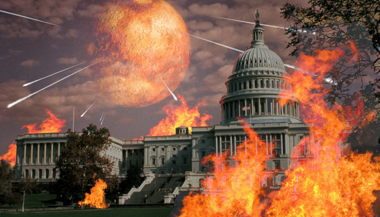 President Trump has shut down the federal government over the fight for the border wall with Democrats right before Christmas Day causing the deaths of millions of Americans.  Children are dying of starvation.  Old people are perishing in the cold of their unheated homes.  Poor people are dying in the streets!  Another 50,000,000 Central Americans are going to die in the coming days all because the eeeevil Donald “The racist Nazi Grinch that stole Xmas” Trump shut down the government and closed the border.  President Donald J.  Trump even caused the baby Jesus seeking refuge to die and killed the Savior!

This is the kind of poopy spewing from the mouths of Democrats who are going batsh*t crazy, jumping up and down like naked apes who were told they couldn’t get any more bananas from Central America.  They run their half of the government just like a banana republic.  This is just a pittance of the hysteria being vomited by Democrats over President Trump demanding Congress fund the wall.  In two years, Republicans have failed to do so due to the RINOs in their midst.  Now, thanks to their massive voter fraud and smear campaigns, Democrats are retaking the House, and both Pelosi and Schumer are mocking Trump in the belief that they just poked him in the eye on his signature issue.

An example of how liberals predict Armageddon

Democrats, who have been quipping that Trump “feels the walls closing in” are now cavorting about claiming that “Trump stands alone.”  They mock him saying, “He’ll never get ‘his wall.’”  Well, it’s not “Trump’s Wall.”  It’s America’s wall to defend against invading criminals, terrorists, and drug dealers.  Only Democrats want those people in the USA as their slave labor along with drugs dealers to keep half their base stupefied while they profit from it all.  (The other half of their base they can count on to vote for what is wrong for America.)  They ignore the 75% of Americans that demand border security.  They say it is only Trump’s base they claim only makes up just 25% of the country that wants this.  Democrats are the ones going to find themselves out in the cold as Trump’s wall falls on them.  They are going to get more than they bargained for against his great determination.  He will beat them at their own game as they play fast and lose with American citizen’s money at the expense of our lives.

Trump played like a wounded animal and once again has lured Democrats into a false sense of security.  What they have actually done is poked the bear.  It’s a battle to the death and Democrats once again came to a battle of wits and wills with Trump and they are still unarmed.  One thing Trump has proven is, if you mess with the bull, you get the horns.  The problem with liberal Democrats is that they suffer from an inmate immaturity that leads to the development of psychoses.  You see them on the road when you pass them and, suddenly, they think they’re in “Fast and Furious.”

They are children who suffer from penis envy wanting to prove they are superior to others.  It is the nature of the righteous to build people up, while it is the nature of leftists to tear others down to their level.  They are inherently immoral, suffering from the sins of greed and envy far more so than most.  That’s why Pelosi and Schumer try to diminish President Trump by mocking his manhood because they can never debate the righteous on the merit of their arguments.  But the great man slaps them down like the petty thugs they are and pushes righteousness upon them to their dismay.  Then, like Wile E. Coyote or Yosemite Sam, they orchestrate their own destruction.  At this point it’s do or die and, as he has done with North Korea, Canada, Mexico, and China, President Trump the Great Negotiator knows when he holds the cards and the other side is bluffing.

Leftist fools are falling all over themselves trying to get in front of cameras to declare Trump to be an evil hater of brown people.  They even have idiots saying that, “Baby Jesus died on the way from Guatemala.”  Yes, Guttierez, we know Hispanics have a penchant for naming their children after Jesus, but that doesn’t make any of them the next Savior.  Perhaps, Senior Guttierez, if you tried reading the Bible that you leftist, God-hating atheists try to lecture Christians on what Jesus would do, then you wouldn’t say such stupid things.  How two-faced are they that they believe they can shame the righteous while they cheer for killing tens of millions of babies in the womb?

The righteous American people have gotten so disgusted with Democrat’s naked lies and their media’s spewing hate and poison, slandering Trump Republicans as racist Nazis, fear-mongering the end of the world from global warming, and promoting their socialist tyranny as benevolent, that listening to Democrats invoke the name of Jesus is both amusing and disgusting.  They always cherry pick the morality tale that suits their own selfish, greedy, nefarious purpose and then warp the meaning to their own twisted nature.  How do they convince themselves they have credibility in speaking of the teachings of Christ when they reject His teachings on every level?  From abortion to Islam, liberals wouldn’t know Jesus if He walked up to them and slapped them in the face.  But they would certainly cheer at His crucifixion.

We see these invaders from the south coming just as predicted, putting women and children in the front lines of their battles with the border patrol for publicity purposes.  When that didn’t work, a man saying he was the father of a little girl starved her to death and crossed the border to give her to the patrol just before she died to blame them.  Now he and the leader of the invaders, a known terrorist, are demanding tens of thousands of dollars for every invader to turn around and go home.  These people are not refugees.  They are bandits akin to the Mongol raiders of the Middle Ages.

The left wouldn’t know righteousness if it fell on their heads and sang, “Oh come all ye faithful.”  They are as lacking in understanding morality as they are in understanding patriotism.  Democrats cry about the shut down as if it will hurt anyone besides themselves.  What would be right is if Democrats in Congress didn’t receive their paychecks, retirement, or back pay they enjoy all on the taxpayer’s dime.  Let Ocasio-Cortez sleep in the streets with the people she wants to import and cry that she, too, is a refugee.  Schumer and Pelosi keep saying, “Walls don’t work.”  They call it “immoral and ineffective and costly.”  So why do they have walls up around their houses?  Why aren’t they inviting illegals to live with them?  Could it be because they make places into socialist toilets akin to their homelands the way they have been doing to California?

Democrats want every dollar in the budget earmarked for their own benefit.  They won’t make a budget with Trump unless they can extort billions from American taxpayers to support their sanctuary sh*tholes and line their own pockets.  $10 trillion dollars in deficit spending under Obama given to their cronies and the Muslim Brotherhood wasn’t enough.  The left is stealing power, stealing taxes, and stealing away this great country with their socialist frauds.  They’re only willing to fund temporary measures they can override.  Please, Mr. President, be the greatest president since Washington and crush the left!  Put down their rabid dogs like Mueller, Pelosi, and Schumer, and write executive orders to institute strict federal voter ID.  Give their socialist agenda the boot right out of America and have teachers start teaching American history again rather than the revisionist indoctrination that has been inflicted on our children.

“Suffer the little children to come to Me,” said Jesus.  That doesn’t mean that stopping those who illegally steal across the border is standing against Jesus.  Jesus didn’t order His apostles to open their homes to anyone that wanted to enter to steal from them.  If you want to help children in other countries rather than American children who need help, then go to those countries and share your wealth.  It is not charity to steal from American taxpayers and give money to invaders to be your welfare fraudulent voter slaves.  President Trump – shut it down and take a vacation.  You have already earned it!  Democrats say they are the ones who made the economy boom.  Let’s seen what happens now with them running half of Congress.  We’ve already gotten a taste as the Stock Market tanks, the Fed raises rates, and Democrats vow to do nothing for Americans.