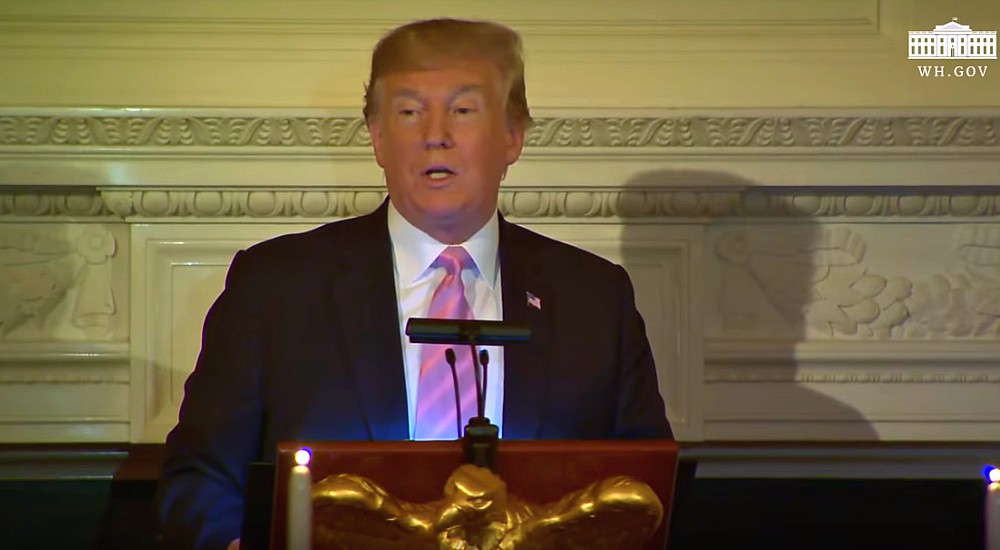 Earlier this week, President Trump spoke to leaders from various religious traditions at the White House in celebration of our National Day of Prayer.

His message was one of unity, hope, and peace. He called for an end to violence against people of all faiths. He praised our tradition of religious liberty and promised that he would do everything in his power to protect that liberty.

The President reminded the gathered audience that we, meaning all people of faith, should be working together to promote respect and tolerance of each other. It doesn’t mean we have to agree on everything, it just means that we are willing and able to live peaceably together.

Full Transcript from the White House:

It is my pleasure to welcome you very special friends to the White House for a dinner before the National Day of Prayer.  We look forward to that tomorrow.

I want to thank our magnificent First Lady, Melania, for hosting this beautiful event.  Thank you.  (Applause.)

And we are also very honored to have with us our great Vice President, Mike Pence.  Mike?  Mike, how are you?  (Applause.)  And Second Lady Karen Pence, who works so hard and does such a great job.  Thank you, Karen.  (Applause.)

Also thanks to Ben Carson and Secretary Sonny Perdue for being with us.  You’re always with us and we appreciate it very much.  Thank you.  Thank you both very much.  (Applause.)

And very special — we’re proudly joined by leaders representing many of the world’s great faiths: Christians, Muslims, Jews, Sikhs, Hindus.  Tonight, we break bread together, united by our love of God, and we renew our resolve to protect the sacred freedom of religion.  All of us.  (Applause.)

In recent weeks, people of faith around the world have faced terrible hardship.  All of us in this room send our love and prayers to the Jewish Americans wounded at the Chabad of Poway shooting in California.  So tragic.  So horrible.  And our hearts break for the life of Lori Gilbert-Kaye, who was so wickedly taken from us.

We mourn for the Christians murdered in Sri Lanka on Easter Sunday, and grieve for the Muslims murdered at their mosques in New Zealand.

Here at home, we also remember the three historically black churches burned recently in Louisiana, and the horrific shooting last year at the Tree of Life synagogue in Pittsburgh.

Violence and terrorism against people of all faiths must end and it must end now.  (Applause.)  All civilized nations must join together in this effort.  In our own country, we must always protect the religious liberty enshrined in our Constitution and in our lives — in our lives.  It’s so important for us all.

I’m thrilled to report that tomorrow the Senate will confirm the 100th federal judge to the court system.  Under my administration, we’re getting to a level where we’re going to be breaking records, with respect to the judiciary — which means a lot for the people in this room because you were treated very poorly, but now you’re — (applause) — with time, you’ll see what happens.

And we’ll have close to 145 very shortly.  One hundred and forty-five federal judges, including two great Supreme Court judges and — Justices of the Supreme Court.  So I think it’s something that was long overdue.  And I think we’re going to be treated very, very fairly.  Very important.

During this holy season, when Christians celebrate Easter, Jews mark the Passover, and Muslims prepare for Ramadan, we’re reminded of how blessed we are to inherit the traditions of freedom and religious tolerance that have defined America from the beginning.

When we embrace the fullness of our faiths, we become better friends, better neighbors, better citizens, and better people.  America is forever.  We will be a nation that believes forever.  And we certainly believe, more than anyone, the power of prayer — the most powerful thing there is.

From our earliest history, we’ve always been people of faith.  Our Declaration of Independence proclaims that our rights are bestowed on us by our Creator.  The First Continental Congress began with a prayer.  Our first President, George Washington, declared a national day of thanksgiving to our Father in Heaven.  Each time we pledge allegiance to our flag, we say that we are “one Nation under God.”  And for 67 years, Presidents have proclaimed a National Day of Prayer.  Sixty-seven years.

Half a mile from where we are gathered this evening stands the Washington Monument.  On the very top of the tallest structure in our nation’s capital, facing the rising sun each morning, two Latin words are prescribed and inscribed.  It’s called, “Praise be to God.”  Very important.

So tonight, we praise God for our nation.  We give thanks for His providence.  We ask Him to watch over and protect the lives of religious believers, and the people of goodwill all over the world, and the people in this room, who are so important to so many different religions.  And we pray that He will continue to bless America with faith, freedom, and peace.

So thank you for coming to the White House.  It is a great honor for Melania and myself to be with you.  Great for Mike and Karen, and all of the wonderful representatives of our country.  And you’re the representatives of our faiths.  And thank you very much.  Very, very important day.  And we’re going to have something incredibly successful tomorrow.  And we look forward to being with you.

Thank you all for being here.  Thank you very much.  (Applause.)  Thank you.