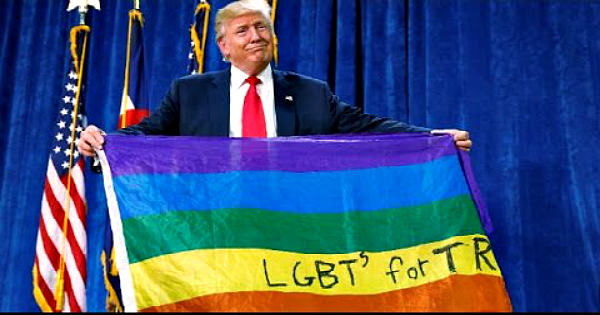 Never had it even been imagined that this story would be written.  President Trump is already running for re-election, although the formal announcement won’t come for a couple of weeks which may have a bearing on what has just taken place. Someone obviously convinced him that it would help him in 2020 to launch a global campaign for homosexuality, better known as Sodomy, and to launch it now during the month of June which is considered ‘Pride Month’. Trump took the bait, which is the biggest disappointment this writer has ever experienced. Talk about getting bad advice!
This past Friday, the president issued a twitter statement showing acceptance to the upcoming Pride Day Parades, a disgusting spectacle with some participants partially nude simulating homosexual sex, with crossdressers wearing gaudy makeup and outrageous costumes. Checking all possible sources to be certain this was not fake news, which we hopefully thought it was, this story not only told of his endorsement of the”‘Gay Agenda” but also showed that President Trump would be leading a major Pride Day Parade. Oh Lord, say it isn’t so.
Here’s how the president worded it over the weekend:  Sayeth he;  “As we celebrate LGBTQ Pride Month and recognize the outstanding contributions LGBTQ people have made to our great Nation, let us also stand in solidarity with the many LGBTQ people who live in dozens of countries worldwide that punish, imprison, or even execute individuals on the basis of their sexual orientation. My administration has launched a global campaign to decriminalize homosexuality and invite all nations to join us in this effort!”
Got that, he is actually saying that he will protect all homosexuals, in other words, encourage them. That roar you are hearing is not thunder, but God pounding a heavenly lectern with an angry fist.
Trump is not only supporting LGBTQ in the U.S. but, like Obama, plans to take it worldwide.  Notice this comes as preparations are being put in place for the 2020 elections. Somebody close to him evidently gave him bad advice thinking this would secure his extra votes to take him back to the Oval Office. He would have been voted back in anyway.
He is crazy if he thinks this will enhance his chances of winning. On the contrary, this idiotic idea will offend every Christian costing him major numbers of votes.  We outnumber the sodomites in our country by a huge majority. It was 68 million of us who put him into office. There are not near that many sexually confused here…thank God!  Otherwise, it might become mandatory for all of us to take up the “gay” life.
The formal announcement for candidates of the 2020 election will be in a couple of weeks. All the good work Trump has done for America would have itself put him back in office. Then he had to botch it up by apparently taking advice from unqualified people.
This writer as an 11-year-old Cub Scout was violently sexualized by a homosexual scoutmaster which shaped my thinking regarding sexual deviants who are out of control. These are dangerous people who don’t care who they physically harm since they are so controlled by lust that they cannot even think as a human being.
This writer does not hate “gays.” I am a people person who likes people and do not want to see anyone experience the horrible consequences of unnatural sex such as HIV AIDS which provides a slow painful death.  And no, AIDS is NOT God’s punishment for the sin of sexual perversion. The body is made of many components including bacteria with various effects. If a man has anal sex with his wife, then changes position for vaginal sex, the mixture of the bacteria involved can prove fatal, like AIDS.
“Gays” have other physical ailments as a result of their activities. Cancer of the anus is common.  Did you know of the; “Gay Bowel Syndrome?”  That condition, which will not be described. is experienced daily by many, many LGBTQ participants.  Then the downright nasty part of the ‘gay’ lifestyle:  Readers, you may want to skip down to the conclusion of this piece:
This outrage is called, “Scatting” where gays rub their feces on each other’s bodies, then lick it off. Rubber sheets are used for that sick ritual.  I know about this because I picked up a free paper in a small news rack in San Francisco and found this in a ‘Gay’ advice column. The one participant said it turns off his partner because of the smell and needed advice on how to overcome that. Nice.
So to promote this lifestyle in any way is not only a grievance to God but puts everyone on shaky ground while embracing a sin that will require your soul which will be turned over to Satan. And one can ask then, “Was it worth it?”
By the way, ‘gayness’ is not a sexual orientation. It is the result of uncontrollable lust that grips so many that they are totally out of control. It is a sexual choice, not orientation. Let’s get that right.
Oh yes, can you imagine President Trump leading a Gay Pride Parade? I can hear at least one of the queens warbling:  “OOOOOOH, Look at his hair…..ooooooogh.
Mr. President, you are making a huge mistake.
Photo Caption: Pride Day Parade Float
ANALYZING TODAY’S NEWS FOR TOMORROW’S HISTORY