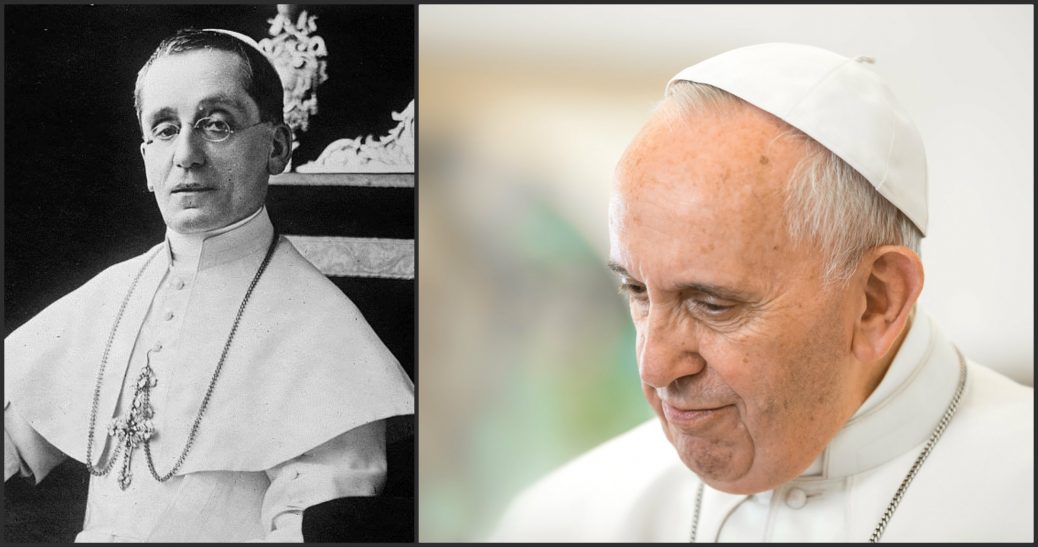 WILL THE REAL INFALLIBLE POPE PLEASE STAND UP?

“The advent of a universal republic, which is longed for by all the world’s worst elements of disorder, and confidently expected by them, is an idea which is now ripe for execution. From this republic, based on the principles of absolute equality of men and of women, would be banished all national distinctions.

“Nor in it would the authority of the father over his children, or of the public power over the citizens, or of God over human society, any longer be acknowledged. If these ideas are put into practice, there will inevitably follow a reign of unheard-of terror.” (Published April 20, 1942, in SJ Weekly)

(We witness such “unheard-of terror” today, as world-govt. profiteers Soros and Hillary backed ISIS to de-stabilize and de-nationalize!)

Based on this bold proclamation, nationalist-defending Pope Benedict XV would have fully supported Donald Trump for President – in severe contrast to Francis who said of Trump that building walls is not Christian.

Indeed, this anti-pope Francis obsessed with world government went so far as to excommunicate Donald Trump from the Catholic Church citing un-Christian behavior.  While no doubt Pope Benedict XV would have seen Trump, like the Emperor Constantine, who many scholars believe incrementally became a Christian.

We see the infiltrated Vatican calling for world government as far back as Oct. 25, 2011, when Tim Worstall published in Forbes Magazine: “The Vatican Calls for World Government! That isn’t just the implication it’s the explicit call in the latest from the Vatican: that we need to move to a system of world government: a document released by the Holy See calling for a world authority to crack down on capitalism suggests some are considering it.”

The Holy Year of the Extraordinary Jubilee of Mercy, sanctioned by the Vatican has now concluded. But not as they expected! For it was God in His Sovereignty who had the final word – though President Trump was defied by the globalists and the pope and even his own Republican Party – the Precious Will of our Sovereign God prevailed! And the courageously honest Pope Benedict XV is looking down from Heaven, smiling!