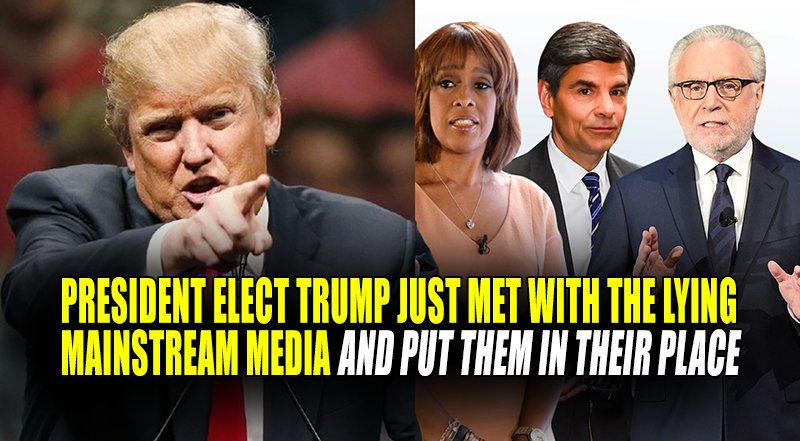 In a private meeting with media personalities and executives from Fox News, CNN, NBC, CBS, PBS, and ABC this evening, Donald Trump held an off-the-record session in which he targeted each personality like “a firing squad” according to an off-the-record source who was in the room.

The off-the-record session, which presumably was intended to negotiate press coverage and access to the President-Elect, was attended by, among others: Wolf Blitzer (CNN), Lester Holt (NBC), Jeff Zucker (the head of CNN), Charlie Rose (PBS), Jay Wallace (Fox executive), Chuck Todd (NBC), George Stephanopolous (ABC), Erin Burnett (CNN), and Martha Radatz (ABC). In a session similar to those held by then President-Elect Barack Obama, the intent of the meeting was to negotiate the details of what media coverage in a Trump presidency will look like. I can say with a high degree of certainty the media did not like the answer they just received.

Given the press’s coverage of the President-Elect during the run-up to Election Day and the many clearly biased, if not illegal, interactions between the press and Hillary Clinton, one can only imagine what President Trump unloaded on each personality in the room. Think about it for a moment – the very personalities who manipulated, lied, and deceived the American people for an entire election cycle all in the same room asking for access to the Donald.

According to the New York Post, and likely leaked by the Trump campaign itself:

“Trump started with [CNN chief] Jeff Zucker and said ‘I hate your network, everyone at CNN is a liar and you should be ashamed,’ ” the source said.

“The meeting was a total disaster. The TV execs and anchors went in there thinking they would be discussing the access they would get to the Trump administration, but instead they got a Trump-style dressing down,” the source added.”

According to multiple reports on social media and RN News:

““The meeting took place in a big board room and there were about 30 or 40 people, including the big news anchors from all the networks.”

“Trump kept saying, ‘We’re in a room of liars, the deceitful dishonest media who got it all wrong.’ He addressed everyone in the room calling the media dishonest, deceitful liars. He called out Jeff Zucker by name and said everyone at CNN was a liar, and CNN was [a] network of liars,” the source said.”

“Trump got every news media big wig into his office and punked them all. It was utterly epic.”

As summarized by Bill Mitchell, folks we didn’t just get a President – we elected a Champion who is willing to attack the dishonest media and basically told them to kiss the American people’s a**. As further evidence that Trump intends to stick it to the media and speak directly to the American people, instead of holding a press conference (like every President has done since the invention of TV), this evening, after the dressing down by the new Commander-in-Chief, Trump did an end run around the media and spoke directly to the country by releasing a policy update through social media. That video can be seen below:

While the precise details of exactly what was said and what wasn’t to the mainstream media haven’t fulled leaked at this point, a simple and powerful point has been made today by President Trump: the media don’t control the hearts and minds of the American people any longer and those who dare to lie, deceive, and roll around in bed with the Democrats will be held accountable by President Trump himself.