Trump Campaign and RNC Ally Together to Quiet the #NeverTrump Movement 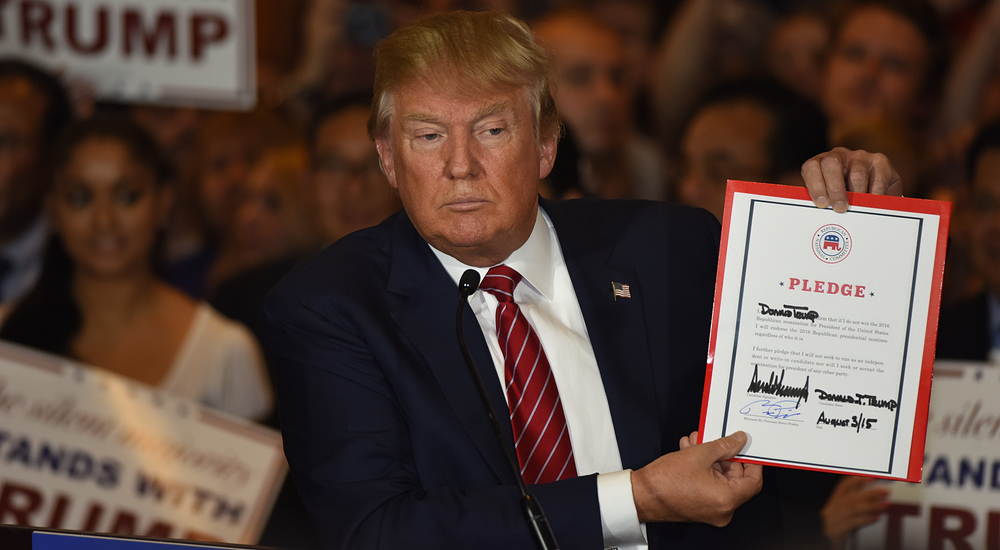 Evidence has emerged depicting an alliance between the Republican establishment at the Republican National Committee (RNC) and the Trump campaign to squash conservatives at Cleveland’s convention.  During Thursday’s Republican National Convention Committee on the Rules and Order of Business Meeting, the Trump campaign wanted to head-off efforts from #NeverTrump forces to unbind delegates and the RNC wanted to maintain their grip on the election process in future nominating contests.

Facebook posts and texts authored after and during the meeting proceedings have emerged showing that the RNC and Trump campaign joined together to stop reforms to the Republican party that have been years in the making and date back well past the 2016 primary election.

Text messages show regional party directors instructing delegates how to vote. Conservative Review has reviewed the full texts and verified their accuracy with a secondary source.

Orders via text message from RNC staff to rules committee members to do whatever their whips say and vote against anything others suggest.

“Hi, Northeast team. This is ****** ***** your RNC RPD. Please remember to follow the lead of Ryder, Barbour, and Duprey on anything they do (supporting or against). Anything that Morton Blackwell or Bruce Ash propose, we urge you to vote no on. I’ll continue to update you as I get more information. Thank you!”

“ANYTHING? I need to hear this from Trump, not RNC staff.”

“Trump Team and RNC team are one team and we are working together.
You should have gotten a text from Trump telling you that. If not, check with them.”

The evidence found gives credence to every Republican voter to ignore the so-called nominee, and choose their own candidate! Time to dispose of Reince Priebus, and the GOP, and begin with a new party, one without the shenanigans. Every Delegate has the responsibility to abstain from voting for Trump, and must, after this new evidence has come to light.

Conservative Review has also obtained a screenshot of a Facebook post by a rules committee member and Trump supporter who ultimately went along with the Establishment for the sake of party unity. In the Facebook post the member writes:

What I did yesterday on the Convention Rules Committee did not make some of my friends happy. I understand. I’m not happy with some of my votes yesterday. For me, it’s always about the long-term goal and in this election cycle, the goal is to get Donald Trump as our nominee and into the White House.

I want the man who puts America first, who isn’t a member of the CFR or the Skull and Bones Secret Society, who never apologizes for America, who didn’t take funding from super PACs and NWO globalist manipulators, who I want representing me. I want the man is rarely, if ever, politically correct and who is right on the issues of illegal immigration and the refugees. I want the man who was voted for by over 14 million voters in their caucuses and primaries against 16 other candidates. I want Donald J. Trump as my next President and I will never apologize for supporting him.

The Rules Committee member further detailed why the tactics were employed at the committee meeting and the backroom agreement intended to thwart reforms for increased transparency aimed at a potential 2020 nominating contest:

The strategy for the remainder of the meeting was to attempt to vote as a majority against any remaining rules amendments and to stay the course and complete the meeting, however long that would take. This tactic worked in our favor for two reasons. First, the constant defeat of every rules amendment had a demoralizing effect on our opposition, those wanting to offer the Conscience Clause and unbind delegates. Second, by our staying to complete our work late last night, rather than end at 6pm and reconvene today, wore down our opposition and didn’t give them any opportunity to regroup. The Conscience Clause was defeated. There will be no unbinding of the delegates. We adjourned just before midnight.

The note lays out the strategy of the Trump/RNC whip team – the expressed goal was to defeat almost every amendment regardless of purpose or intent and to grind any opposition into submission.  The alliance of Trump and the Republican Establishment has been beneficial to both parties.  Trump was able to use the establishment wing of the RNC to stop any unbinding of the delegates. In exchange, the establishment got anti-establishment Trump supporters to side with them against rules changes that decentralized power away from the Chairman of the Republican Party.

Leading the efforts to reform future nominating contests and provide more transparency in the GOP was Morton Blackwell, founder of the conservative Leadership Institute. Quickly Thursday morning the Trump campaign and RNC found themselves in an uncertain position on the outcome on potential amendments. And rather than proceed with uncertain amendments the meeting was halted under the guise of a broken printer to stall for time.

During the time that elapsed, the Trump campaign hammered out an agreement with establishment elements of the RNC to support one another’s agenda. For those hoping that Trump would be a force to shake-up the establishment and do away with business as usual politics, they will be sorely disappointed.

Don’t tell me any of this is right, moral or just. How can anyone even consider voting for Donald Trump after this event? If you are a #nevertrump then you need to be more dug in, have more fire in your belly, and demand that the GOP answers for this dearly!