Trump to Bureaucrats – Out With the Old 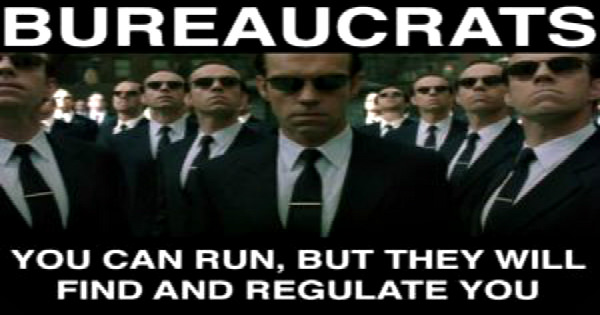 There should be no permanent jobs in U.S. government of any kind. A large portion of the problem incoming administrations have is the entrenched, perpetual bureaucracy.

Whether they be elected, appointed or hired as any other employee would, there should be no permanent job security. Even at its best, permanent job security leads inevitably to sloth. With tenure there is also little incentive to excel and innovate. This is of course where the old saying, “good enough for government work,” comes from.

Yet this has been the life’s work for the democrat party for decades. Over the years, rules have been crafted pertaining to the hiring and release of federal government bureaucrats. It’s far too easy to hire them and very difficult to fire them. Leftist bureaucrats are specifically bred in colleges and universities to populate government. They are trained for nothing else.
Therefore, as we would expect, Republican administrations have a much tougher go of it when they obtain authority over these departments, by way of winning elections.

Some say it’s impossible for an incoming administration to clean house, so many take this as gospel and don’t even try. Others, like the George W. Bush administration, tried the compassionate conservative approach, thinking his people could work with the entrenched bureaucracy. He found out otherwise. He discovered that regardless of who wins elections, the bureaucrats believe they run Washington and the government. And as long as incoming administrations buy into this premise, it will just continue. This is what is meant by “shadow government.”

But then along comes Trump, who immediately struck out against the norm of appointing those with mostly government experience, and has instead appointed business executives to his cabinet and inner circle.

Refreshingly these gentleman and ladies have little experience in the ways of government. Business is their forte, which translates into actually wanting to accomplish something, rather than merely perpetuating and further growing an already far too bloated bureaucracy.

And these new appointees are already beginning to shake things up. Take new Secretary of State, Rex Tillerson for example.

Yesterday, the Daily Mail reported  that, “Diplomatic experts in the State Department were laid off on Thursday as part of the transition into the new administration.” They added that, “Former Assistant Secretary for Non-Proliferation Tom Countryman, who was let go last month, criticized the redundancies and said he feared the White House is planning to not rely on State Department experts when conducting foreign policy.”

GOOD! And experts at what – giving away the store? The State Department is completely worthless and has done nothing but weaken our standing and influence throughout the globe. They are masters of useless diplomacy. Ours is a world governed by the strategic use of force. Nothing is or has ever been solved by way of diplomacy, particularly not through the State Department. NOTHING!

Patrick Kennedy, who served for nine years as the undersecretary for management, Assistant Secretaries for Administration and Consular Affairs Michele Bond and Joyce Anne Barr, and Ambassador Gentry Smith, director of the Office for Foreign Missions, were sent letters by the White House that their service was no longer required.”

“Any implication that that these four people quit is wrong,” one senior State Department official said. “These people are loyal to the secretary, the President and to the State Department. There is just not any attempt here to dis the President. People are not quitting and running away in disgust. This is the White House cleaning house.” Again…Good!

We should all encourage Secretary Tillerson to ramp the pace and sack many more of these useless bureaucrats.

Next up – Scott Pruitt. Hopefully, now that he has been confirmed as the new EPA Chief, he, like Tillerson, will begin to rapidly clean house. And not a moment too soon in my opinion.