The True Face of Universal Healthcare 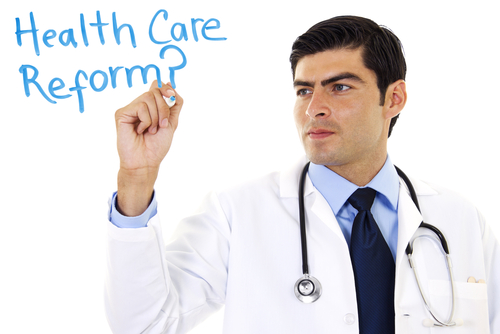 Starting with the loss of privacy you can see the prelude to this in a recent case in California where police were sanctioned by the courts to break in unannounced into a welfare recipient’s home to search for evidence of welfare fraud.  The medicine cabinet will be the major focus of the healthcare police and before long other items like gun safes will be fair game.

The doctors will soon enough realize the compensation and paperwork plus the harassment, high fines and threats of jail time hardly constitutes a worth while career.  High risk work without the commensurate compensation is not an incentive to continue.

New drugs will begin to disappear from the market as the cost of discovery is eaten up by bureaucratic dictates, political favoritism of those manufacturers who comply with the highest contributions to candidates and the long wait for government approval becomes too expensive to bear.

Shoddy standards will prevail as more and more conscientious health care workers retire and leave for less regulated fields where the chance of personal initiative and job satisfaction is possible.  Regulated by a myriad of regulations that carry heavy fines and/or imprisonment for what used to be concerns calling for only admonishments and/or retraining will cull out those who see the cost /benefit ratio is too high.  Those who can manipulate and cover-up will be the norm and the honest worker will recede from  the field in disgust. The politicians dismiss this as improbable because they adhere to the belief that people will obey indefinitely in spite of evidence of rebellion.

The long lines and rationing are inevitable.  As the resources diminish and the demand grows the imbalance must appear in some form.  People who previously could schedule a flu shot will be told they are not in a category that has as much priority as someone more elderly, more infirm or “needy”.  People with the most urgent needs for expensive care will be pushed to the end of the line in an effort for the government to try to keep its ever growing deficit from ballooning even higher. This has been seen wherever universal health care has been tried.  A mini example is the Veterans Healthcare. Even those with the money to afford better health care will not be able to find it for the government will have a monopoly that no business can compete with, just as none can compete with first class delivery because the Post Office is a sacred cow that controls the stamp market.

Today you can still call a doctor’s office and schedule an appointment in a reasonable period of time to have your condition examined and treated.  Tomorrow you will call an 800 number, wait for an automated response that will tell you are to push several buttons , enter your medical authorization number, punch in your personal medical history, document your past medical expenditures and listen for a response that will tell you your priority number and who you should contact via another automated system that will schedule an appointment if your condition warrants an appointment according to government criteria.  And then you will wait for a call that may never come.  If you do get to see a physician and you do not fully qualify for reimbursement you will be hounded with calls and letters threatening you with charges of fraud, garnishment of your wages and taxes and fines for your indiscretion.  And should you decide to appeal it will be back to standing in line and getting a number to have your case heard.  The elderly will talk of the “good old days” before universal health care but the youth brought up in public schools by entrenched unionized teachers will just consider their elders to be forgetful of the past.  And universal health care will be a way of life although a very unpleasant and life threatening experience.

And the costs will rise and the taxes and borrowing and money printing will explode until the money is worthless, the credit will no longer be extended and the taxes will leave nothing for other living expenses.  As people begin to go hungry so that an aristocratic bureaucrat can vacation abroad the contrast of the disparity will see the discontent.

This will initiate the birth of an underground that will seek reform in the form of rebellion as more and more the cries of dissatisfaction fall on the deaf ears of those in political power.  Taxation without representation will reappear and the consequences will evolve into violence and desperation.  This will be the legacy of “universal health care”.  If you think this is fantasy look at Venezuela.

There is an alternative to such a macabre scenario. Introduce the force of competition into the market by forbidding the government to monopolize the health care industry. Competition will provide incentive , the honest accounting that profit must rely upon to measure its success and the entry of those who want to provide more and better services in the hopes of earning profits.  This is the American way and has numerous historical examples of goods and services being abundantly supplied to millions of consumers.  This is the choice this election is placing before the American people.  The candidates are all prattling about some form of universal health care.  Reject that from their platform and see the true colors of those who understand what America stands for.  If one candidate has the courage to denounce the ugliness of universal health care that candidate deserves admiration and support.  To the degree they reject the notion of a free ride to the doctor’s office is the degree they stand for a better America.