The True Definition of Liberalism 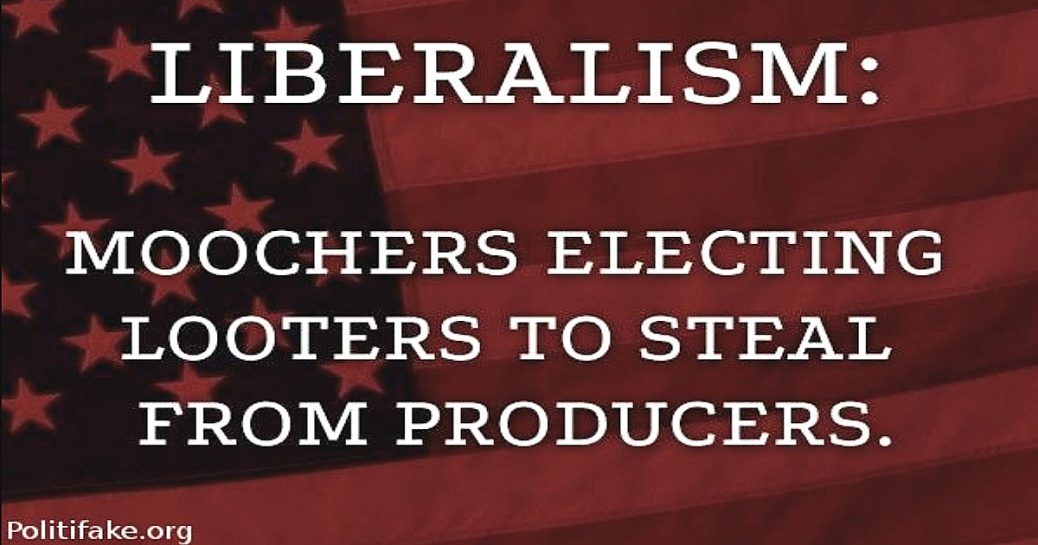 The e-mail subject line read: “This is the true definition of liberalism.” Upon opening the e-mail, I thought the definition may be conveyed in the body of an essay, but instead there was a T-Shirt for $17.95 reading: “Liberalism: moochers electing looters to steal from producers.”

The aforementioned (T-shirt) definition of “liberalism” is more-or-less a paraphrased description Ayn Rand has given liberals/leftists in Atlas Shrugged… Unfortunately it does not describe liberals, or liberalism, it describes – to some degree – the activity that some which call themselves “liberal” or are referred to as liberals may engage in. If the definition were true, then most, if not all, of the many people that voted for Barack Obama, and Bill Clinton, are moochers (e.g., Warren Buffet, Bill Gates, and many other wealthy people, voted for Obama, Clinton et al; such would seem to contradict the definition?) and voted, as they did, so that those men – Clinton & Obama – could take money from producers (people that work, or own a business?), and give – we suppose – the money to other moochers. Such a description may please some people on the Socio-political Right, but it does not describe “liberalism.”

Omitted from the description of “liberalism” is the thought that objective morality & God are codified bigotry of the Right. Liberalism – as a doctrine or ideology – begins with a denial of reality intelligently organized independent of the subjective consciousness; this – the denial of objective-reality – is the ground of all ideologies (note: irrespective of how often conservatives e.g., Limbaugh may refer to conservatism as an ideology, it is not an ideology…) as an ideology irrespective of whether those which subscribe to the ideology are aware of this, or otherwise. From this thought, those which embrace a denial of eternal verities, objective truth, God et al are driven – some are driven pathologically – to make society reflect their particular subjective view as to how they think things ought to be organized; government is their means of realizing such an organized society… Because such a view of the world, denies the validity of objective morality, “might-makes-right” is a natural corollary of their view/s. Thus, the “liberal,” as with all ideologues, tacitly, embrace the use of Government to force the public into compliance; force is understood (viewed) – by souls so ordered – as an accompanying necessity. The liberal – as all ideologues – generally explicitly deny such a claim, but understand Government force as an organic consequence of their empowerment.

As an aside, we must point out that most adherents to worldviews do not consciously decide to adopt a worldview; they are drafted by their particular life’s experiences; this naturally includes their educational experience… A dynamic and continuing synthesis takes place in people souls – in most people, they tack now left, now right – few people are implacably fixed in their worldview, but as the culture itself has become more ideological – aided by technological advance which has allowed us to place survival in the rear-view mirror, we have tended towards the port side… Whether the ideology that one points to is liberalism, progressivism, socialism, communism, fascism, hedonism, idealism (Argued by some as a philosophy, but it is a denial of the possibility of philosophy), nihilism, egoism et al, they all derive from the conscious, or unconscious, denial of reality which is intelligently ordered independently of the subjective consciousness. Each ideology – taken to its logical extension – is inimical to humans, and to any enduring culture, because ideologies – by definition – are Procrustean beds, which inevitably will not allow humans and society organic development, which is vital to any living thing…

Both the Socio-political Right and Left have their pet epithets of derogation which they ascribe to their opponents; “liberal,” is one used by the social-political Right to pillory those on the social-political Left – a verbal caricature – by which they dismiss the denizen of the port; the Socio-political Left likes to tag those of us on the starboard-side as racists, sexists, homophobes, bigots et al, and casting such aspersions satisfy many which utter them… In this writer’s view, if one takes the time to explain an ideology’s origin – and incompatibility – with an individual’s avowed faith, and transcendent values (e.g., “love” understood from the perspective of the Socio-political Left, is satiation of a biological urge, nothing enduring, nothing transcending, at all! Such love is mere material selfishness…), then one has a fair chance of producing within the individual – over time (perhaps measured in many years) – seeing the malevolence their embraced/practiced ideology has upon their relations, and be prompted to search, and study so as to render their avowed faith, and ostensibly avowed transcendent principles, consonant, with their worldview. Similarly with all ideologues…