Trespassing is Illegal, Even at the Border

There is much controversy over the issue of illegal immigration.  The controversy is continuing because the fundamental issue is being overlooked. In a state when a person enters your property without permission that person is a trespasser.  That person is breaking a law that protects private property rights.  It the equivalent of thievery.  If people could trample over your land and trash it and use it for transportation you would have no property rights and you would pay for the land and the taxes so that anyone who didn’t pay for the land and the upkeep and the taxes would have just as much right to use you property as you who are paying for it.  That is why property rights were created, to protect the person who acquires property.  If you enter Federal or State property without permission such as a military base you are subject to trespassing laws.  Trespassing laws if enforced make the issue of borders far less complicated and addresses who is being protected and why.

All states have laws against trespassing and it is only on the border where these laws are being ignored.  What is the function of a border police if trespassing is illegal?  Why do we need a border patrol to stop people from other countries trespassing on private or federal or state property?  In the interior of the country a person who trespasses whether they are from another country or not is breaking the law and is prosecuted.  Why should the border states be burdened with Federal intervention especially if they are not going to enforce the state’s trespassing laws?  The Feds are often called in to assist states with law enforcement.  How is having a border patrol separate and apart from state trespassing law in the interest of the state or federal border security?

The United States is a country where private property rights are fundamental to our culture, our national heritage and are the only vehicle where private individuals can create wealth and enjoy the fruits of their labor.  Current day politicians have largely lost sight of this fundamental right and by way of evasion and obfuscation have created a border security issue that centers on how can they gain the votes of those people entering our country by trespassing can be exonerated, made citizens, have the benefits of citizenship and be placated by politicians who do not prioritize the values of the current citizens and their property rights. 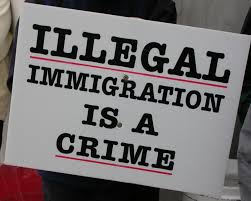 This issue would have never arose if politicians learned something besides how to get elected.  A politician who understands and prioritizes property rights is a rare breed in America today.  Practically all of them are willing to vote for confiscation of private property in some form, willing to mortgage the future of the country for political pandering and ignore the history of countries who have collapsed by the creation of hyper-inflation, chaos and corruption.  The tea party is only a vehicle of frustration who will cater to any politicians who will appear as someone who agrees with their frustration.  As Scott Brown has shown this is the same old political scam we have been seeing throughout history.  When a politician promises what you want to hear you really should question why he says he agrees and why hasn’t he articulated it before you brought it up.  You won’t get an honest answer because honesty to a politician is not near as important to him or her as being elected.

To get this issue back on track it is time to voice discontent with trespassing.  If a person crosses a fence or a land line that doesn’t belong to them it doesn’t matter if they are foreign or domestic, they are trespassing and should be arrested and charged with trespassing.  All American law enforcement should recognize and support this.  An off duty police officer recognizes a crime in process when a store is robbed.  When a landowner is robbed by a trespasser why should he or she be reluctant to recognize a law is being broken and stop the perpetrator?  Should we have a special police force that only deals with foreign trespassers?  Why?

Gun ownership has now been recognized as an individual right by the Supreme Court ( well duh) how hard is it to read the Second Amendment and understand what it says?  The right to self defense protects the right to life.  What protects the right to property?  The law declares what is owned by pages of laws and court interpretations.  Land is recorded and taxed and assessed.  What good is it to process land records if you are going to permit some trespassers to enter uninvited to trample, trash and travel will-nilly over what is being declared private property?  This issue is so fundamentally simple only a quack politician could blather about “comprehensive” immigration, call it a complex issue and avoid the rights violations blatantly in front of them.

There is no argument over whether a person entering the United States has right to be here if they have satisfied the laws that govern immigration.  Those laws do not supersede or override the right to own property.  A person who doesn’t recognize private property rights and violates them by trespassing doesn’t want to be an American and should be given no quarter by simply showing up.  An employer who doesn’t support private property rights and is willing to hire trespassers is ignoring the right that made his business possible.

Some issues become insolvable because they are never clearly defined or are argued with nonessentials.  To argue 2 plus 2 is 6 without recognizing the value of one is an endless polemical facade.  This is what we are doing with the ‘immigration issue.  We are ignoring the act that is breaking our laws and boundaries and values and letting the politicians define the issue in terms no one can decipher.  To take a coherent stand one must be willing to stand up for property rights and forget about whether a person is in the country illegally or not.  If they came into the country across land they did not own or had permission to cross they are trespassers and should be arrested.  When they decide to recognize and respect private property rights then and only then should they be considered fit for legal immigration. Ports of entry are created for legal entry and should be the only avenue for immigration.